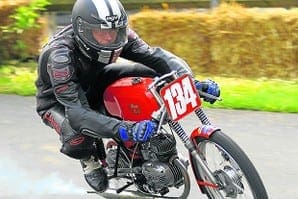 Top of the Thundersprint’s rare tree, and every other event’s too, has to be Sammy Miller’s Moto Guzzi V8. Sam described the eight cylinder 500cc GP racer as his 2011 Christmas present to himself. Clearly, Santa loves Sam because the iconic V8 is currently being prepped for a Thundersprint appearance. Sam says that Thundersprint will be the first time that the bike is seen running in Britain.

As a back up, Sammy will be bringing Ronald Agoston’s fabulous tribute to the Mike Hailwood RC181 Honda – the bike on which Mike beat Giacomo Agostini in the legendary 1967 Senior TT. Hearing Sam scream the Honda round the tight Thundersprint track always has the spectators shouting for more.

The Thundersprint’s other legend, Jim Redman, will also be Honda mounted – this time on board Clive Brooker’s CR750. Clive said: “Jim always demands that the bike is in full race trim because the Thundersprint is his only competitive event of the year.

“He’s right on top of the job and I know what it must have been like to be a Honda factory mechanic when Jim was winning his six world championships.”

Yet another exotic Honda comes in the form of Frenchman Phillippe Hanus’ CBX1300. Phil is bringing two Honda 6s to the Thundersprint – a road race bike and a turbo-charged, nitro burning dragster. Thundersprint organiser Frank Melling is desperately trying to persuade the crazy Frenchman not to try to launch the dragster down the Thundersprint’s start straight. Frank said: “Phil is a lovely bloke, and a super talented racer, but stopping a 200mph classic drag bike before it ends up on Marks and Spencer’s roof will be a challenge for anyone. Watch this space!” 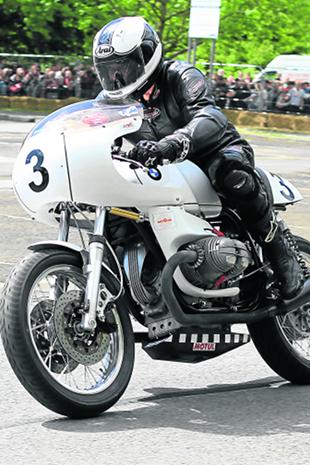 From just over the border
Another French star, and Thundersprint regular, is Alain Marie. The amiable Norman will be bringing another one of his ex-works BMWs to the Thundersprint and his totally committed riding style always has the fans on their feet.

From just over the border in Belgium, Johan Van der Perre is bringing his super rare 600cc Sarolea GP bike. Johan said: “I have heard so much about the Thundersprint that this year I was determined to come and see how fast my Sarolea, and me, are against the top British classic racers. It’s going to be a big learning experience and a really exciting trip.”

Interesting as Johan’s bike is, it will be competing hard in the interest stakes against some fabulous British owned bikes. Top classic racer, Jerry Ashton is bringing his 350cc MV Agusta again – and with a
view to setting the fastest time of the day – while Dave Hutchens is making a first time appearance with his unique Seeley Konig.

With more than 120 race entries and 100 cavalcaders, there will be a feast for any classic racing fan and, like the rest of the Thundersprint, the paddock has free admission with no keep out or VIP signs.

For more information on the event visit www.thundersprint.com or phone 01928 740498 between 9am and 8pm.