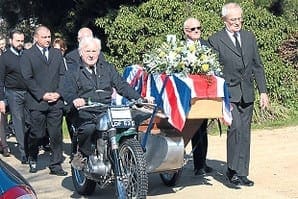 At Dougie’s last request, the five-time British champion led a large cortège the half mile journey to his final resting place but not without suffering a final ‘five’ en route when Ron stalled the outfit at ‘Heavens Gate’. “She just ran out of puff,” smiled Ron, “I let her go down a bit low.”

Colin Dommett, Terry Hall, Pete Shemwell, Dave Langston, Alan Wright, Jim Curry, Geoff Hands and many Evesham and Stratford club members past and present were among those who followed on. Doug passengered for Geoff Hands for many years in the Seventies, but on a Beamish Suzuki outfit rather than an Ariel. Ron and Doug were British sidecar champions from 1962 to 1966.