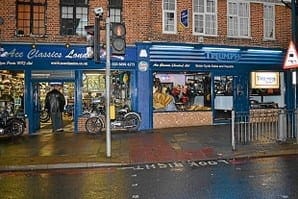 Oh, and did we mention he was riding the 1958 650cc Triumph Trophy he used in the ISDT and the Welsh Three Day? No? Well he was and what a way to open the new showroom of a company almost synonymous with – but not exclusive to – pre-unit Meriden Triumphs.

We’d been invited along by the father and son team behind Ace Classics – Cliff and Kevin Rushworth – who felt their opening night on November 24, 2012, would be something special. Okay, so a visit to Ace Classics (London) Ltd is always a bit special as it’s known for the high quality parts it supplies for the Meriden twins but there’s not generally a rock ’n’ roll band playing or a party atmosphere going on… at least we don’t think there is…

Just in case you didn’t know Ace Classics has been involved with Triumphs for donkey’s years and its reputation has been built on supplying quality products that fit and work since 1991. The range includes engine parts, frame parts, wheel parts, transfers, bolt kits and well, loads more besides. It’s not a static range either as the company is receptive to requests from Triumph enthusiasts stuck for parts and will consider making previously unobtainable stuff. Ace Classics keeps an eye on quality control too by using its own dedicated manufacturing facility which is well equipped with modern technology.

This technology isn’t just for parts manufacture either as the company does restoration work to a very high standard on all British classics not just Triumphs. Ace even offers a ‘get you sorted for the summer’ service to fettle your bike for the hopefully fine weather in 2013.