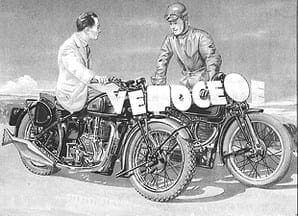 When 1930 dawned, Veloce Limited still had nothing available in their range to bridge the gap between eir moderately priced 250cc two stroke and their more expensive 350cc overhead camshaft models. Their GTP two stroke had superseded the earlier overhung crankshaft models on which they had built their reputation, and represented a considerable step forward with an engine built along more conventional lines. Yet although it was undoubtedly a very good machine (many claim one of the best of the single cylinder two strokes of that era), it was only a 250 that had all the limitations that went with a two stroke of that capacity. Unquestionably it was a reliable touring model that handled well, needed a minimum of maintenance and was relatively cheap to run.

Those who desired something more exciting were more likely to be attracted to the company's higher performance overhead camshaft models, assuming they were prepared to pay a little above the average. What was lacking was a model mid way between the two that was less expensive than the latter yet could offer a reasonable turn of performance that would appeal more to the less well-off enthusiast as well as to the overseas buyers. 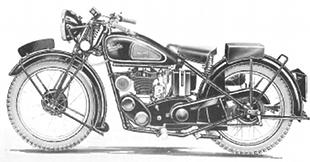 Perhaps of greater importance, it would provide a means of picking up additional business to help offset the effects of the deepening recession that were already beginning to be felt. Motorcycles were affected as much as anything else, as the figures showed in later years. The number of machines in use fell from 724,319 in 1930 to 421,205 in 1939, a long way from their peak of 731,298 in 1928.

Initially, thoughts turned to a 350cc side valve and a prototype engine was designed by Phil Irving which was fitted temporarily into a GTP frame and running gear whilst a new frame was being designed. Built along traditional lines with an iron cylinder barrel and an aluminium alloy cylinder head, the prototype engine was inclined forward in the frame at an angle of about 20-, this being a popular fad at that time. In typical Velocette fashion the engine used many existing parts such as the flywheels from the ohc models and the big end assembly with 13 rollers in an uncaged row. Even the lubrication system was that of the GTP, being of the total loss type with a throttle-controlled oil pump. Sad to relate it was not a success, not even when its new frame was available. It had only a mediocre performance and was not as quiet mechanically as had been expected, despite its fully-enclosed valve gear.

Eugene Goodman
It was at this point that Eugene Goodman, John Goodman's younger son, began to think along quite different lines. He had in mind a 250cc push rod-operated overhead valve engine and reckoned that if he could position the timing gear high enough and use only short push rods, he could come close to the performance available from an ohc engine of similar size. In this respect it has been alleged he got his idea from the engine layout of the Riley car, although he subsequently dismissed this claim during an interview. Like the other engine designers, he was well acquainted with patents relating to engine design and had studied them carefully before coming up with his own interpretation. His aim was to reduce as much as possible the weight of the reciprocating parts of the valve gear, whilst at the same time keeping it of simple design.

To achieve a high level of mechanical silence he arranged the intermediate gear pinion driven from the crankshaft pinion to have one more tooth than the pinion that carried the cams. By adopting what is known as the hunting tooth principle, it would ensure uniform wear of the teeth of all the pinions that were in mesh with each other. Furthermore, the spindle of the intermediate gear pinion was provided with a means of lateral adjustment, so that the pinions could be meshed very accurately during assembly in the factory. Initially, the pinions were straight cut, which was acceptable when the first few engines had thick crankcases. However, when a pattern error had been corrected and they were thinner, as originally planned, the pinions had to have a helical cut as the low level of mechanical noise required was no longer as evident. Three changes in the angle of cut were made before perfection was obtained, from 15 to 11 and then 16 degrees. The importance of always fitting a comparable train of matching pinions need not be overstressed!

Teething problems
Like all new designs, the new 248cc 68×68.25mm bore and stroke engine had a few teething problems, which related mostly to the lubrication of the rocker gear. The original plan for lubrication by oil mist had proved unsatisfactory and led to the adoption of an external oil feed from the top of the timing cover to the rocker box. There were also oil leaks from the rocker box and tappet covers, which necessitated adding a bridge between the castings and a longer centre holding down bolt. Internally, better lubrication of the valve stems and guides was effected by piercing the discs between the rocker thrust springs so that oil could blow through from the push rod tube.

Later, a take-off passage was provided in the timing cover (known in the works as the map of Africa due to its shape) to direct oil to the cam wheel bush.

Cyclewise, the new 250 used the frame originally designed for the side valve engine and some parts from the GTP two stroke, including the brakes. The hubs, however, were of different design having more satisfactory taper roller bearings. As for the front fork, that too was of Webb design and similar to that of the GTP, differing only in using the larger diameter steering head cups and cones required by the new frame.

Lightweight version
The gearbox was a new four speed design, a lightweight version of that currently in use on the KSS and KTS models as far as its internals were concerned. It differed in having lugs machined into its bottom which located with the cross tube of the frame to which it was secured by steel half clamps, studs and nuts. The first models were supplied with a hand gear change, like their ohc counterparts, although a bolt-on exterior positive stop gear change was available as an optional extra. For the first time the familiar lozenged-shaped 'fishtail' silencer came into use, although without the fishtail end, its short tail pipe having an obliquely cut end. By this time the ohc models had begun using a shortened version of the fishtail design, fishtail and all, not too unlike the design used on the spring frame models from 1954 on.

Designated the MOV model, which signified Type M, overhead valve in the factory's terminology, production commenced during August 1933. The new model was well received during its launch at that year's Olympia Show, subsequent road tests confirming it was not only attractive looking but also had handling and performance well in keeping with Velocette standards. It sold at £47.10s and weighed 2751bs fully equipped, and after the engine had been run in, it was capable of a maximum speed in excess of 60mph, regarded as very satisfactory at that time.

Apart from the war years, the MOV remained in production until the end of 1948, with many modifications that included automatic ignition advance from 1937 on. For that final year of production the entire Velocette range were fitted with a Dowry Oleomatic front fork of the telescopic type, Webb having stopped making their renowned girder fork. Many regard the MOV thus equipped as the most handsome of all the MOV models made, a fitting epitaph.

The potential of the MOV engine in speed events was soon realised when it was found how easily it would respond to tuning. Relatively simple modifications would bring about a noticeable increase in performance, whilst those who were really skilled at this art could achieve the seemingly impossible. The Australians have always been very proficient in this respect and although it was fact rather than fiction, the factory steadfastly refused to accept that an MOV had been timed at over 100mph in that country!

The MOV led to the 349cc MAC model, and later still the 495cc MSS. The MAC proved to be such a lively model that it caused the owners of the ohc models some concern. Not only was it capable of coming close to their performance but it was cheaper to buy too. This led to a subsequent upgrading of the K series range to retain status – but that's another story on its own.