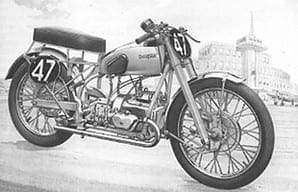 When permission was given after World War 2 to resume the manufacture of motorcycles for civilian use, Douglas received this news with some confidence. When William Douglas had disposed of his shares during late 1931 he divided the proceeds of the sale amongst his family. It was his way of resolving constant family squabbles about inheritances and lack of agreement on policy decisions. The resulting change of ownership marked the beginning of a decline, which eventually brought the company close to the point of extinction. This might well have occurred, had not the war intervened. Although the company was no longer in a position to manufacture motorcycles for the armed forces, as had happened during the 1914-1918 war, war work led to a gradual build up of staff which eventually peaked at 2,500. Part of this work related to the production of portable generator units and it was the twin cylinder engine from one of these units that became the basis of the new post war design. Mounted transversely in a frame with torsion bar rear suspension instead of longitudinally in a rigid frame as had been the company's practice in the past, it represented the first entirely new Douglas since the 500cc Endeavour of 1935.

Although the new T35 model attracted a good deal of attention, it soon became apparent that some unforeseen problems had to be resolved. Early frame breakages were no real problem, as they could be resolved by design modifications. The engine, however, gave much greater cause for concern. Despite its flat twin layout it vibrated more than would have been expected and its rate of petrol consumption was greater than anticipated too. Numerous modifications were made, none of which showed much improvement, so as a last resort it was decided to ask Freddie Dixon to tackle the problem. Many years had passed since Freddie's full time involvement with Douglas, both as an employee and a rider, but such was his reputation with engines that if anyone could sort out the problems, he was the man!

Redesign of the cylinder
It did not take Freddie long to come up with the answer, which in the main related to a redesign of the cylinder heads. Basically, these amounted to repositioning the sparking plug at a much shallower angle, which in turn meant a new rocker cover which had a 'dip' in its top surface to accommodate this change. He also fitted a different type of piston, which had a flat, rather than a convex crown, and re-arranged the inlet port so that it was downdraught rather than updraught. These modifications, together with some reprofiling of the combustion chamber, completely changed the engine characteristics. Gone was the annoying vibration, maximum speed had increased significandy, and at the same time the rate of petrol consumption decreased. Thus was born the Mark III model, which made its debut during early 1948. 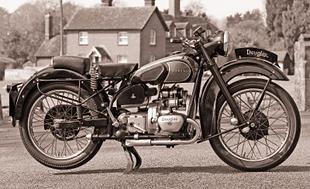 With the realisation that Douglas now had a model capable of showing a good performance potential, thoughts began to turn towards its use in road racing events. Obviously it would not have stood a chance paired against any of the current road racing models at that time, such as the 7R AJS, the Manx Norton or the KTT Velocette. However, Clubman races were now being included in the Isle of Man TT programme, which presented a much more favourable proposition. With this in mind four Douglas entries were made for the 1949 Junior Clubmans TT, one of them a 'works' entry to be ridden by Franz Pados, a Hungarian rider who at one time had ridden for NSU. The other three entries were by private owners entered by the London Douglas MCC. Douglas enthusiasts were overjoyed at the return of their favourite marque.

The race results were promising for an as yet largely undeveloped engine. The works bike finished 16th, at an average speed of 70.28mph, and of the three LDMCC members, Jack Hill finished 36th at 66.39mph and W.F. Wood 50th at 61.90mph. The third rider, Tony Camfield, completed only two laps before unspecified problems caused his retirement. A pity, because his second lap time was faster than the lap time of any of the other three riders. These results provided all the encouragement needed and before long Eddy Withers and Freddie Dixon were working long into the night developing a much better engine destined to power the 90 Plus model that would be announced as part of the 1950 model programme.

It may be wondered how it was possible to become involved in a racing programme when the company had once again run into such severe financial difficulties than the Official Receiver had been called in. Being something of an expert in getting around unforeseen problems, admittedly not often of this magnitude, Eddy Withers circumvented it by taking the racing activities under the wing of his own company so that Withers of West Norwood became, in effect, the racing branch of the factory. He had enjoyed a very long association with Freddie Dixon, having been taken on as his assistant when he applied to Douglas for a job after leaving home following a row with his father. Eddy lodged with Freddie and got on so well that he and his wife Dolly came to regard Eddy as a son. They came together again when Freddie was called in to sort out the original T35 engine, by which time Freddie was living in an old monastery close to the top of Reigate Hill, in Surrey. It was there that the two of them did much of the development work on the 90 Plus engine, which Eddy put to the test at quite indecent speeds along the Dorking by pass.

More difficult task
The development of the 90 Plus engine proved to be a more difficult task than anticipated, largely due to problems associated with its breathing. A horizontally opposed twin creates a tremendous pumping effect within the crankcase and it was largely a question of how to best alleviate this to lessen the amount of power it absorbed. Other problems related to the amount of valve overlap as with the existing timing the valves were unable to follow the contours of the cams at very high speeds, even when triple valve springs were fitted. Rockers twisted under stress and when alloy cylinder heads and barrels were used, problems occurred due to differing coefficients of expansion which caused the long bolt through steel studs to pull out of the crankcase casting. All were eventually resolved along with many others, with the result that the first production 90 Plus models produced a minimum power output of 25bhp at 6,500rpm.

Such was the initial promise shown by the 90 Plus models that the Douglas entry in the 1950 Junior Clubmans TT totalled 25% of the complete entry! They gave a reasonable account of themselves too, as J.R. Clark finished 4th, just under 3mph slower than the winner's race speed. C.E.E. Robinson was 5th, and C.G. Griffiths 16th. Twelve of the Douglas entry finished the race and of the total entry, only three were non starters.

The future for the Douglas as a Clubmans racer looked promising, but a cloud soon appeared on the horizon that put paid to any further aspirations. Another 350 was also being developed, which would outperform the Douglas and cut short its promising start. The all conquering Gold Star BSA was on the way up, destined ultimately to completely dominate the Clubmans TT in both the Junior and Senior classes. Although Freddie Dixon tried his best the 90 Plus was never the 350cc Gold Star's equal, despite the fact that Freddie had managed to raise the power output of the 90 Plus to 31 bhp, to give a maximum speed of 108mph at 10,000rpm. Although the 90 Plus continued in production for several more years, the Douglas entry in the 1952 Junior Clubmans was down to six and the best result 39th place. The writing was on the wall for all to see. In October 1954 the production of all the current models, including the 90 Plus, came to an end. The sole successor was the short lived and much heavier Dragonfly, which itself came to an end in March 1957 when the manufacture of Douglas motorcycles ceased for all time.