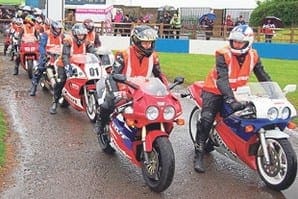 Making it all possible was Donington’s circuit and operations manager Bob Adams, who was also instrumental in obtaining permission from Dorna for the parade to go ahead.

Well aware of the pull and cachet of period machines, Dorna was more than happy to put the classic bike parade in the official weekend programme.

All parading VJMC machines were professionally scrutinised by a team that visited the club’s paddock, and Donington Park circuit also provided a liaison lady for the entire weekend who ensured there were no hiccups getting out onto the track.

Niall Mackenzie led the parades, which passed off without incident despite the undoubtedly suppressed desires of numerous club members to “show ‘em how it’s done” etc. In fact certain club members are still claiming they were out just before the first WSB race and prepared the track so that Tom Sykes could take the first leg of a famous double victory!

Joking aside, everyone behaved impeccably and the slick organisation from Donington Park, Dorna and the VJMC made the event a real success. Even the rain on Saturday failed to dampen the glowing pride of the 20 lucky club riders, and with Sunday’s dry parade running just before the first WSB race, no-one could have asked for a better bash.

The VJMC’s show organiser Andy Bolas did a sterling job behind the scenes, and with a further 30 VJMC machines on static display, Donington Park did the club proud.

The VJMC’s relationship with the circuit continues to grow, and the race track and club will be hosting The Classic Club’s Bike Show on August 9-10. From what we hear, the event is already at or close to maximum in terms of clubs and machines, so it should be a really special event for classic enthusiasts.