Having been kicked out of the town’s polytechnic after just a year of a mechanical engineering course, Dave Manning hangs his head in shame as he returns to Stafford, thirty years later.

Early October is never going to have predictable weather, and although the second weekend of the month this year was rather clement, it seems that some folk have been spoilt after the incredible summer months. 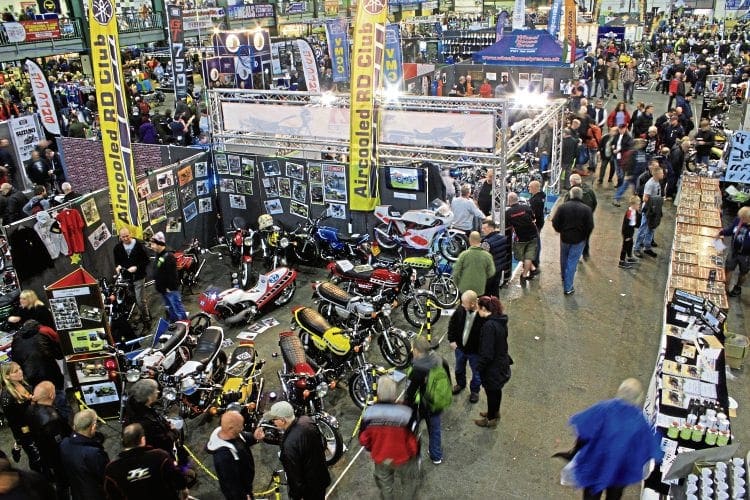 Although that’s not to say that the wind and rain, as warm as they were that weekend, were especially welcome.

While the rain, especially on the Sunday, may have kept some less-hardy folk at home, the world’s largest classic bike show was still busy, with probably the most eclectic mix of classic two-wheeled machinery you could expect.

The Classic Motorcycle Mechanics Show has a slightly more modern remit than the April show, covering machinery built through the Eighties and into the Nineties (much like the magazine that lends the show its name), alongside older products from the British industry, which results in rather more Japanese motorcycles, but also encompassing a significant amount of Italian machinery, as well as those products hailing from Hinckley.

The Italian connection was aptly displayed by a comprehensive selection of Cagiva Grand Prix machinery – no less than 11 bikes, more than had been seen in any one place previously, including those ridden by Eddie Lawson, Randy Mamola and John Kocinski.

Sammy Miller also brought an Italian stallion, in the form of the 250cc 1969 Moto Villa V4 from 1969, paired up on the Footman James stand with the ’69 ex-works Jawa 350cc as raced by Bill Ivy and
Silvio Grassetti.

Read more and view more images in the November 2018 issue of OBM – on sale now!