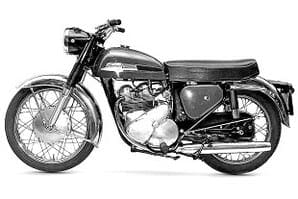 It is unbelievable how long it took to get the whole industry up to speed with such an idea as electric start. Even those manufacturers that were still around as the 60s lurched into the 70s didn’t really have the drop of it. The early problems were caused by poor electrics only barely able to power the lights and a horn let alone an electric boot.

Second problem was the quality of the electric switchgear available to manufacturers of the time.

Or at least the quality they were prepared to pay for. There was little wrong with the concept of an electric start motorcycle built on traditional lines as the OBM editor has ridden just such an Electro after it had been fully sorted and the lights, starter and indicators worked well all day. To the point in fact where they were forgotten about as they were so reliable.

In Norton’s case the catalyst for an electric start bike came from the needs of the USA market and initial orders deemed the idea a good one. A model was drawn up that would be similar but not the same as the existing smaller machines in the range but with a few additions such as an extra battery to give six volts. The bike also got Roadholder forks and decent brakes but a composite frame that was on its limit with the adequate power of the 400cc engine. Still, it’s an interesting bike and like most Brit stuff, sort the electrics with modern components and the transformation is amazing.