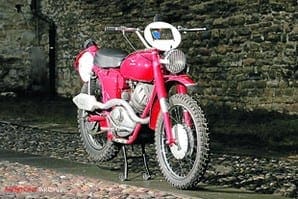 This gorgeous red Moto Guzzi Lodola long distance trials motorcycle dates from 1962 when its first rider – Italian Policeman Gianfranco Saini – used it in that year’s ISDT at Garmisch Partenkirchen in Germany. Saini was a member of the works Guzzi team and obviously held in high regard as the factory allowed him to buy the model shortly after the event. No doubt this was at an advantageous rate and followed common practice of all the works teams no matter which country they were from.

A policeman by profession, Gianfranco Saini was regularly part of Moto Guzzi’s official team. The ISDT would be among the most important competitions the team would ride in and Saini competed in two on this particular bike. Garmisch first, then Czechoslovakia in 1963 at a place called Spindierui. This was not a happy event for the Italians and they didn’t achieve success. Elsewhere though, in events such as the Bergamo Valley races – among the most important events in Italy – success was much more forthcoming. 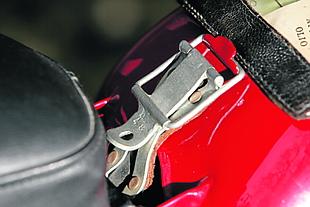 Serving the country
This particular model of Lodola had a small production run of 80 machines, the majority of which were built as police specification and delivered to the General Command of the Guardia di Finanza – Italian Police – in Rome. A dozen or so were finished in a special Blue Corazzieri and went to the defence ministry and army of Rome for military purposes. Despite this demand from various uniformed services for the Lodola some machines did make it into private hands either through Guzzi’s dealer network or directly from Moto Guzzi. The so called ‘production’ models were assembled practically only on firm order. Highlighting the difference for this special production run the numbering system used on the ‘regularity’ models differed slightly from the norm at Guzzi’s Mandello plant and for each bike frame and engine numbers are identical.

Though produced in various capacities, depending on the needs of the order or buyer, in this particular case the Lodola is of 235cc. The official figures for the Gianfranco Saini model are 14hp at 7500rpm, with a four-speed gearbox and a quoted top speed of 130kph.

Even though the public sales were expected to be minimal, Moto Guzzi took the trouble of producing a full colour brochure for the model and added a comprehensive maintenance booklet.

In addition to the brochures, there were splendid colour calendars in 1962 showing the rider portraits – Daminelli, Saini, Franco Dall'Ara and other riders of the time.

An English view
In an interesting demonstration of the esteem UK magazines were held in the motorcycling world of the 60s, MotorCycle’s George Wilson found himself at a loose end in Milan so phoned the Moto Guzzi factory asking if he may pop along and try one of their works ISDT models. Moto Guzzi were delighted to accommodate Mr Wilson and even assembled one of the team bikes from that year – a Lodola Regularity similar to the one in this feature – that had been stripped for inspection. It was admitted to George that, while all the cycle parts and engine had completed the ISDT, they hadn’t done it as one unit. This was deemed not a problem and the short test went ahead. 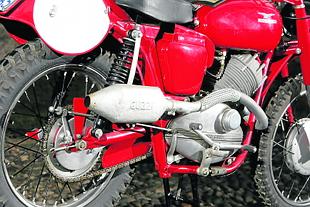 The original Lodola – a 175cc ohc machine – which worked well right up until it was stripped by private owners for a decoke. It seems the average home mechanic had problems getting the valve timing right on assembly. Moto Guzzi reviewed the problem, developed a solution that seemed foolproof but to no avail. Reluctantly the company reverted to pushrod operation for production models. The factory teams though got the benefit of ohc and five-speed gearboxes for their and their country’s honour.

A short browse through several issues of the MotorCycle shows that Wilson was no slouch off-road and he eagerly aimed the Lodola at some rough going. His post-ride notes were full of enthusiasm for the motorcycle, claiming he’d never felt more at home on any machine so quickly. His impromptu ISDT stage included all sorts of terrain from tight turns on cambers – easy if the ‘tap’ was kept open – and a series of jumps with landing both downhill and flat that were, too, deemed easy on this model.

Later, in the company of a factory rider, George headed for the mountain roads near the factory where he claimed the suspension felt like he was riding on air. With five speeds on hand, it seemed no gradient was too steep for the Lodola and, it was guessed, first gear would only be engaged for climbing the side of a house. At the other end of the scale, top gear was found to be similar to the hot Honda sporting 250cc roadster tested in a previous issue – truly sporting performance for an off-roader of the day and a reminder for Wilson of his tests on Moto Guzzi race bikes at the Isle of Man.