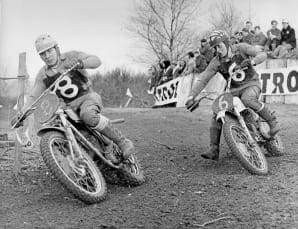 Despite its title, the Hagon Shocks-sponsored Classic Dirt Bike Show at Telford — which many enthusiasts still call ‘Wrighty’s Show’ after its founder Alan Wright — will cover much more than off-road motorcycle sport in all its guises, and to prove it, trials legend Sammy Miller will be taking along a truly exotic Italian road racer in the shape of a 1964 500cc grand prix double-overhead-camshaft Bianchi twin that’s currently undergoing a refreshment service at the Bashley Manor museum workshops.

Will we hear it bellow at Telford? Well, like most of the other bikes at the museum it is made to run, and Sammy will indeed be putting the six-speed Lino Tonti-designed masterpiece through its paces at several events this year…