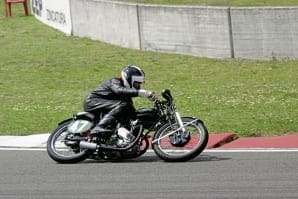 The ASI Moto Show has to be one of the best-kept secrets of the classic bike world in the UK – which, considering the advertising the Italian club has done over the 16 years it’s been running, is somewhat surprising, writes Ian Kerr, with pictures by himself and Tony Page.

Based at the Autodromo di Varano de’Melagari, close to Parma in northern Italy, the three-day track event is a superb festival of motorcycling that’s totally free to view, yet as I discovered at the beginning of May, it’s visited by very few Brits.

According to main organiser Palmino Poli, president of the Automotoclub Storico Italiano (ASI), the idea is to encourage people to preserve classic machines and come out and ride them so that others will follow in their wheel tracks.

ASI has 250,000 members and 220 affiliated clubs in Italy, so wields some serious influence!