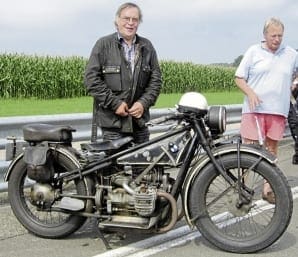 For the first two days, August 29-30, 17 of them participated in the 50th Hengelo Run, near Arnhem, for motorcycles manufactured before 1939.

John Wallis writes: “I first rode my 1924 SS80 there in 1972, with my father Albert riding my BS Straight Four with the Austin Seven engine. We almost didn’t make it because somewhere around Stansted the crankshaft broke on the four.

“After making some phone calls, dad found a member of the 750cc Club (for Austin Sevens) nearby who had a spare bottom end, so after getting there we dismantled the two engines and swapped them over right through the night, with just 40 minutes’ sleep in the garage.