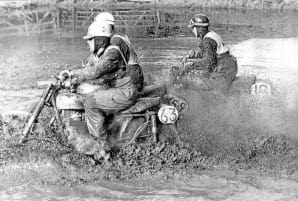 Ken Odlin makes a splash as he rides Ted Wildman’s Matchless in the 1957 Lincs Grand National at Cadwell Park.

I was most interested in the article about Ted Wildman’s motorcycle shop in Halton Road, Spilsby, Lincolnshire (Old Bike Mart, March).

Ted, who was a scrutineer at Cadwell Park road races in the 1940s and 50s, also rode in trials and scrambles, and we local riders used to meet at his shop in the 1950s and 60s.

Like many of my mates, I was also keen on scrambling. We bought old bikes such as a 16H Norton for £3-10s which ran quite well on tractor paraffin (TVO) once it was warm, as well as old Velocettes, Rudges, New Imperials, Ariels and Raleighs.

When my brother joined the Army and gave me his ex-WD Matchless, out came the hacksaw and off went the mudguards and silencer.

Some second-hand knobblies were fitted and I went scrambling. Everything was done on a shoestring back then, especially as I worked all hours on a farm, but luckily a lad in the village who also rode in scrambles and grass track events took the bike for me.

I rode the Matchless at Winceby, Grantham, Scunthorpe and other venues, and after a bit of practise I managed to overtake Ted, who was riding an almost-new Matchless G80CS, and win.

He pulled me to one side and said: “Well, boy, it looks as if you can ride better than I, so you can ride my Matchless.”

“What?” I thought. I just couldn’t believe my luck!

Although Ted was only 43 at the time, that meant to a 17-year-old that he was getting on a bit, but I thanked him profusely and he sponsored me for a few years on other bikes including James, Greeves, Francis-Barnett and a BSA C15.

Ted was very particular about cleaning the bikes. There were no pressure washers, and he just waited until the muck had dried before gently brushing it off. He was very good at tuning, and the bikes never let me down.

After my National Service, I became a motorcycle instructor and bought a BSA Gold Star and a B50 which I rode for a few years until pre-65 motocross started, and then I rode AJS, Matchless G80CS and Matchless Metisse.

At 74, after riding in scrambles for 56 years, I finally decided it was time to pack it up. I enclose a photo of me on Ted’s Matchless at the Lincs Grand National at Cadwell Park in 1957. I think I won the handicap race, and the following year I finished second to BSA factory rider Brian Stonebridge in the 15 lap final.