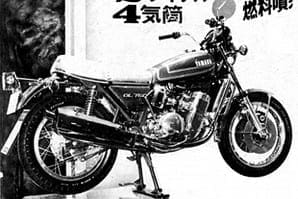 The bike is as much concept machine as it is prototype but if the reality is anything like the bike on display this is going to be something very special indeed. Four cylinders, 750cc, water cooling, twin front disc with double piston calipers and fuel injection. This is pretty serious stuff, make no mistake.

Resplendent in candy red with blue decals and white pinstriping the bike sports what looks like a show only white seat but there’s no escaping the fact that to all intents and purposes everything else looks ready for the road including an intriguing four-into-two exhaust system.

If the bike looked futuristic in 1971 or later at the 1973 Paris Bike Show that’s primarily because it was; bristling with ideas that hadn’t even been on road machines at the initial unveiling. The peripherals were largely from the soon to be discredited TX750 twin with running gear shared with another prototype in the guise of the RZ201 Wankel engined roadster.

Further evidence of blue sky research and lateral thinking was evident in the crankcases which were essentially forerunners of the legendary TZ500 and TZ700/750. The fuel injection system owed much to Yamaha’s snowmobiles and their on-going development. This was Yamaha’s take on where the industry was going and a very direct response to Honda’s CB750.

Why you can’t ride it…
A rider friendly TZ750 on the road might have been many people’s dream but even in the very early 1970s Yamaha was aware of the impending anti-two-stroke legislation coming off the West Coast of the USA. This, the never- ending development issues with the RZ201 Wankel and dire problems with the TX750 convinced Yamaha that the YZ 401 was doomed to remain a concept machine i.e. no commonality of parts.

There’s also a belief that the bike exhibited was never actually even capable of being run. Some suggest that the engine lacked a full set of internals and even a possibility that major external engine structures were wood or even clay, painted to look like the real thing. Shame really, it would have given the H2 and Kettle boys something to worry about.