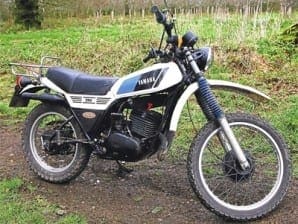 Did the trail bike, or enduro if you really want to be correct about it, replace the 100-year-old Brit Bike as a winter hack? Look back in time a bit, to those heady days when you could pick up a cooking single or twin for next to nowt, you remember those times don’t you?

Way before the classic movement started and anyone who had an old bike was either totally strapped for cash, ‘alternative’ or building a chopper.

Back then you’d see bikes being winterised by the application of grease, Waxoyl and any amount of other water repellent products. Often this depended on where the winteriser actually lived – the steelworks on my doorstep yielded a remarkable number of useful winterising products that would repel the worst that the elements could throw at a motorcycle, though we’re going to ignore what these products did for your social standing in polite society.

Once the classic and restoration movement got up and running it began to be difficult to find an old Brit Bike, luckily this coincided with the Japanese idea of an easy to ride trail or enduro bike being produced in large quantities filtering onto the market. These bikes had several advantages for winter weather, generally they had good electrics with excellent lights and indicators which made bad weather riding so much safer.

Being designed at the very least for a certain amount of off-roading they were also able to cope with snow and ice much better than a heavier Brit bike.

I didn’t really connect into this enduro hack scene – I was riding trials every weekend and right into the competition scene – until a mate of mine, hitherto a purely road bike rider turned up at our house one night on a DT250 Yamaha – it had to be a Yamaha as, apart from a dalliance with a 400/4 Honda – he was a Yamaha obsessive, still is for that matter. Anyway, there I was putting the wheels back in the Bulto and watching the snow blast past the garage window, when I heard a bike pull up and a helmeted figure walked past the window a few moments later. I was surprised to find it was said roadster mate enthusing about his ‘trail bike and I ought to come and look at it.’

It had actually stopped snowing and I risked a look outside to see this ‘trail bike’ which turned out to be a DT250 like the one in our pictures here. Probably the same year too – ’79 – and my mate regularly rode it to and from Consett to the steelworks in Teesside where he was working, a distance of nearly 60 miles and a task that it performed exceedingly well as I recall. I was reminded of my mate’s DT250 when on a three bike enduro test for Classic Dirt Bike – my other title. The owner of one bike offered the DT250 for me to ride to our test spot.

Green laning
Just in case you’re reading this paper for the first time and aren’t familiar with the editor’s predilection for off-road bikes – regular subscribers gloss over this bit please – I’m much more a fan of high bars and footrests pulled back a bit than the café racer style but, each to their own. Anyway, the DT felt comfortable straightaway and it started easily so I followed its owner Mark Bartholomew, mounted on an Ossa, along some back lanes then off-road to a green lane. Though the DT model did do some enduro work it was eclipsed by the IT range from Yamaha as a pukka enduro model.

That said, the DT was more than just a gentle trail bike and following Mark as he took me through the scenic stuff near his home I felt the DT would provide a huge amount of fun for anyone whose aspirations in the off-road world went as far as some trail riding in the company of the local TRF – Trail Riders Federation.

The DT isn’t as intimidating as a full on enduro bike, no, it’s much more novice friendly thanks to its looks in part and that it comes with full road equipment. Don’t let this fool you though as the DT could very easily be converted into something much more hardcore, it would spoil its charm a little but it wouldn’t be outclassed in the enduro world.

New technology
Thanks to its emphasis on ease of use for the trail riding, a bike such as this DT makes an excellent around town machine. The Japanese seemed to tap into this fact fairly quickly whereas the British industry seemed ignorant of it. That’s not to say the home manufacturers didn’t produce trail machines, they did and there were some nice bikes that came about but it was a last gasp by an industry desperate for a boost to flagging sales. OK, so the DT, there are plenty of gears in the box for slow speed trickling through the morning traffic into the office or wherever you work, there’s enough oomph from the 250cc engine to deal with all sorts of incidents in town, the brakes are excellent too, within the constraints of drum brakes of an off-road size.

Mark isn’t actually sure what linings are on the shoes, probably whatever Yamaha supplied as standard and they work well. Suspension too is good and the cantilever rear end is similar to the out and out MXer – the YZ. This type of rear end has been around so long that it can be forgotten how revolutionary it was in a time when two shocks at the rear were the norm. The DT got the cantilever for the same reasons that the motocross models did… it was better on the rough than twin shocks, given its longer travel and softer spring rates. That it also saved a little bit of weight was a beneficial side effect.

User friendly
For those determined to carry a passenger on the DT there were what we in the UK call ‘pillion rests’ but in the USA were classed as ‘buddy pegs’ mounted direct to the cantilever assembly. This meant any passenger would have to get used to their legs moving up and down with the suspension. Admittedly this wouldn’t be a huge problem on the Tarmac as suspension movement would be limited and gentle. Off-road however, and trail riding can be a two-up outing, the pumping action would ensure no deep vein thrombosis for the passenger… All in all, the DT is and was on the day, a nice bike to ride. If you’ve not tried one, or were part of the trail bike boom 30 years ago, maybe it’s time to revisit the DT250.