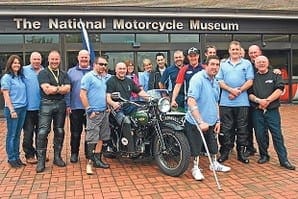 The riders were ex-Territorials Sergeant Colin Hamilton and John Sandford-Hart, who have both lost legs. Their passengers were Lance Bombardier Ben Parkinson, who lost both legs and suffered brain and spinal injuries on active service in 2006, and Sapper Jimmy Wilson, who lost both his legs in Afghanistan during 2011. The Ride 4 the Wounded run, organised in conjunction with Troop Aid and Pilgrim Bandits, was also supported by Best Western Hotels, Spada Clothing and Sonic Intercoms among others. Money raised will provide treatment and welfare for other badly wounded soldiers.

Overhauled for its journey from Inverness to Plymouth, the 1000cc V-twin BSA needed little attention from the museum mechanics in attendance – Colin and Wesley Wall. A 1950 BSA Golden Flash/Watsonian outfit was taken along as back-up, after being ridden round Mallory Park circuit by the crew at the Festival of 1000 Bikes. This was only used for the final arrival in Plymouth, where the run ended at the 29th Commando Regiment HQ.

After visiting wards at Birmingham’s Queen Elizabeth Hospital and the SSAFA Norton House facility for patients’ families en route, the soldiers made a lunch stop at the motorcycle museum, where they were greeted by 19 time TT winner John McGuinness, TT/BSB star Michael Rutter and BSB contender Gary Mason.