By 1930 the recession that followed the Wall Street crash in October the previous year was beginning to take its toll, not only in the USA but on the Continent too. Unemployment in Britain soon reached 2,000,000 and would stay at that level for some time to come. All but the basic essentials of life became difficult to sell and many reverted to a price cutting war that inevitably meant bankruptcy for those who cut their profits to the bone. Motorcycle manufacturers were affected just as much as any other industrial concern and several well-known names fell by the wayside within the next few years. Even BSA did not exhibit at the 1931 Motorcycle Show.

Some of the smaller firms, such as Veloce Limited, must have found it hard going indeed, even though they were able to trade on their Junior TT wins of 1926, 1928 and 1929 and the introduction of their KIT over-the-counter race replica at the 1928 Show. They tended to cater for the more discerning customer, who was prepared to pay a little more for a thoroughbred machine in the knowledge that it had a proven competition history. Even so, the directors of the company had constantly to wrack their brains to save money wherever possible.

They were in a slightly different position from that of their contemporaries because they had what in effect was a two model range – somewhat expensive variants of the original ohc K series design, and two overhung crankshaft two strokes. A new middle range model was needed to attract new customers whilst retaining the allegiance of those who were already confirmed Velocette enthusiasts.

A difficult enough task under normal circumstances, and one which left precious little margin for any miscalculations.

For the 1930 programme, the overhung crankshaft two strokes were replaced by an entirely new model built along more conventional lines – the model GTP. As detailed in an earlier feature in this series, it proved to be one of the best single cylinder two strokes of the 30s and encouraged the use of coil ignition. It sold for £38 fully equipped with electric lighting, only £2 more that the utility lightweight it replaced for which lights were an extra.

More ambitious rider
For the more ambitious rider who required a machine of larger capacity, an additional ohc model was added to the range, the coil ignition twin exhaust port KTP. Although Veloce Limited had always tended not to pander to popular trends, they made the exception on this occasion. Chromium plating was all the rage and it seemed as though the more plating a machine could sport, the better it sold. Veloce Limited had always been sparing on the amount of plating they used on any of their models, relying instead on the traditional black and gold finish so beloved of all Velocette enthusiasts. A twin exhaust port system meant more chrome, as well as giving the machine a more balanced appearance. Taking the bull by the horns, not only did the new KTP model have a twin port exhaust system but in addition it also employed coil ignition. It sold for £58, inclusive of electric lighting.

In many respects, the new KTP filled the middle of the range gap so that those who wanted an ohc model but found it was beyond their price range could now purchase one at a more advantageous price. Apart from the extra exhaust pipe and silencer and a changed timing cover for the dynamo drive, the KTP bore a close resemblance to its single port counterparts. Sadly, it was not all it seemed. Not only was the twin exhaust port cylinder less efficient than the single exhaust port design, but in addition the contact breaker points mounted on the extreme left hand end of the camshaft were susceptible to oil leakage from the pressure fed lubrication system. Oil and electrics just don't mix.

There was also an additional problem if the ignition was inadvertently left switched on so that the battery fully discharged itself. Although there was no emergency start facility, it was claimed the dynamo would provide enough energy for a spark to start the engine if the rider ran and bump started the machine whilst it was in bottom gear. All very well if the rider lived at the top of a steep hill, or could run like Lindford Christie! Getting used to switching off the ignition was soon mastered, but there was no convenient and easy way to boost the performance of the KTP or to seal off the oil leaks in a satisfactory manner. 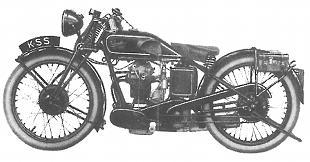 It seems likely that only a handful of KTP models have survived that still retain their original specification. Thanks to the commonality of parts used throughout the Velocette range of ohc models, a KTP could be converted to something like KSS specification, with performance to match. It involved fitting a single exhaust port cylinder head, changing the carburettor to a clip fitting type and using the screw in induction stub, fitting a magneto on the platform that previously held the dynamo retaining straps, changing the former's driving sprocket and chain assembly as well at the timing and lower bevel gear covers, and fitting a KSS type camshaft and cambox end cover and a new right hand exhaust pipe and silencer. Obviously it would have been a prohibitively expensive operation when new, but not at the time when second hand spares were abundant. The change would always be apparent to the experienced eye, however, as all KTP engines had the engine number prefix KA.

Engine modifications
Even with all the engine modifications, the specification of the modified machine would not be identical to that of an equivalent single port ohc model. The KTP had a petrol tank that was bolted to the frame fore and aft, with a cutaway in its underside that normally contained the inverted ignition coil. Also both wheels were of 19" diameter, the front one with a pressed steel brake plate. Furthermore, one must not forget the KTP was supplied with hand gear change, although presumably the bolt-on positive stop foot change could have been fitted as an optional extra at additional cost.

A KTP converted in the manner described made a good vintage racer as 19" racing tyres were easier to obtain in later years than the original 21" size on most of the single port models. It would meet the vintage racing specification laid down by the VMCC at that time.

Although the KTP model was short lived, it seems likely enough were sold to overcome what otherwise might have been a severe enough loss to cause undue concern at such a difficult time. This in itself speaks volumes for Veloce's policy of harmonising parts amongst as many different models as possible, even though their reputation may have suffered some short-term harm. The swift disappearance of the KTP model acknowledged the factory were aware of its shortcomings and needed to look at other ways of producing a more satisfactory middle-of-the-range model. That came later, in the form of the MOV.