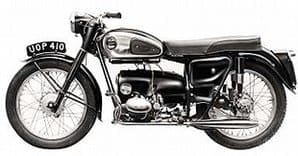 When Veloce Limited launched their 248cc overhead valve MOV model in 1933 they were onto a winner right from the start. With a maximum speed in excess of 60mph, widely regarded as very good at that time, it proved a better machine than many of its contemporaries, and at least the equal of some road-going 350s. It continued in production until the end of the 1948 season, when it was phased out along with the company's iron engined 495cc MSS model. Room was needed for the large scale production of the new 149cc LE water-cooled horizontally-opposed side valve twin.

The 349cc MAC model should have been phased out at the same time, had not there been a delay in getting the LE into quantity production. The MAC continued virtually unchanged until 1952, and was given a spring frame a year later, but there was still no replacement for the much lamented MOV. Although the LE had a charm all its own and met the requirements of the person who needed quiet running machines, with good weather protection and freedom from regular maintenance, it could not in any sense of the word be regarded as a replacement for the MOV. Indeed, many Velocette enthusiasts viewed it as hardly a motorcycle at all in the generally accepted sense, even after its capacity had been 'stretched' to 192cc. They needed something with better performance to plug the gap. 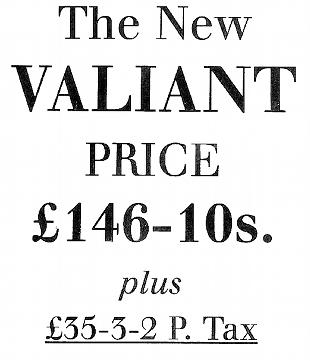 The answer came during November 1956, though not in the form expected – an overhead valve version of the LE with a conventional tubed frame. Outwardly, the engine resembled that of the LE in certain respects, apart from the obvious use of air-cooled cylinder heads and barrels. Unfortunately, it had not been practicable to increase the capacity of the basic engine layout to a full 250cc. It had the same bore and stroke measurements as its side valve counterpart, and therefore a similar capacity of 192cc. To many this was an initial disappointment.

Internally, the power unit specification differed from that of the LE in certain respects. Foremost was the use of a four-speed foot gear change gearbox, built in unit with the engine like that of the LEs three-speed version. In addition, the crankshaft assembly had been stiffened up by widening the circular central flywheel member, which served also as a crank support for the inner shanks of the two 'beefed up' crankpins. The big end bearings were of the split shell type, having lead bronze linings. A lead bronze bearing at each end supported the crankshaft assembly.

Miller generator
The forward end of the crankshaft drove the rotor of a Miller generator, similar to that fitted to the LE and containing the a.c. lighting and ignition coils. A worm gear cut into the crankshaft acted as a drive for the submerged gear-type oil pump located within the detachable sump.

Although the lubrication system was very thorough, as one would take for granted on a Velocette, the sump held only a quart of oil. An external filter unit was mounted transversely at the rear of the engine unit to help keep the oil clean.

The rear end of the crankshaft transmitted the drive through helically cut reduction gears to a multi-plate clutch, the driven side of which connected with the input shaft of the four-speed gearbox. Final drive to the rear wheel was taken via a universal joint by a shaft enclosed within the left-hand alloy tube of the rear suspension's pivoted fork.

Painted silver
The cylinder barrels were of cast iron, painted silver, the pistons having a domed top with cutaways for valve clearance. Each had two compression rings and an oil scraper. Initially, the compression ratio was 8:1, but in the light of subsequent experience, this was lowered to 7.8:1 and later to 7:1.

The cylinder heads were of light alloy, having a hemispherical combustion chamber and with shrunk-in hardened inserts for the valve seats. Cast-in pillars supported the overhead valve rockers, which ran on hardened steel spindles carried in bronze bush bearings. By mounting the spindles eccentrically, valve clearance adjustment was easy. The valves were operated by short Stellite-ended Duralumin push rods and fitted with single coil springs. 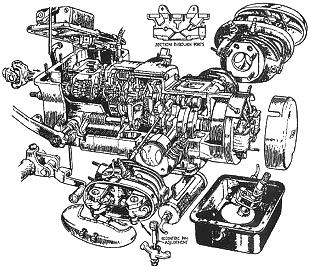 It was intended the Valiant would have a single carburettor with a long induction pipe to each cylinder. This arrangement proved unsatisfactory, even with pre-heating to prevent icing up. Twin carburettors provided the ultimate solution. The exhaust system took the form of twin underslung exhaust pipes, terminating in torpedo-shaped silencers. It gave a pleasant but not obtrusive exhaust note.

Full duplex tube
Specially designed for the Valiant the frame had a single top tube and a full duplex tube cradle to support the engine unit, with an integral sub-frame.

Rear suspension was of the pivoted fork type, although surprisingly the suspension units were fixed in a near vertical position at their upper ends and were not adjustable in arcuate slots like those of the LE. The front fork was virtually identical to that of the LE, containing only springs with no provision for damping. Both wheels were of 18" diameter and shod with 3.25" section tyres. The rear wheel was quickly detachable.

A painted detachable two-piece metal casing enclosed the upper half of the engine and gearbox to give the unit a tidy appearance. The Valiant was available either in the traditional black and gold finish, or in an alternative green colour. The Valiant's overall weight was 2551bs and its launch-time price £146.10s plus £35.3s.2d purchase tax. 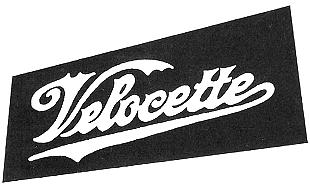 Accustomed to working to a tight budget and using as great a commonality of parts throughout the model range as possible, it was inevitable that Veloce Limited should regard the Valiant as the best compromise they could offer to meet the need for a 250 with sporting pretentions. Sadly, it met with only moderate success. Despite the addition of a Vee-Line version fitted with a dolphin fairing in late 1958, and the availability of various options and accessories, the Valiant never really made its mark and production ceased at the end of the 1964 production year.

Costing just over £181 initially (a figure which eventually ended up just short of the £200 mark) it was much more expensive than a Triumph Tiger Cub or the average Villiers-engined two-stroke of that era. Furthermore, the engine was known to be fragile if it was allowed to exceed 7,000rpm – easy on account of its deceptive smoothness. Yet for all that the Valiant was a nice bike in the true Velocette tradition, with good road holding, suspension and braking. I wish I still had mine.