When Veloce Limited entered the motorcycle market by acquiring the assets and goodwill of Kelecom Motors in 1904, the latter's 2hp four stroke was renamed Veloce. This name continued to be used on the company's own four stroke designs that followed, which sadly were not quite the success intended. Their 1910 276cc unit construction inlet over exhaust design was of advanced design, so much so that the ever-conservative motorcyclist fought shy of it. Although a few were sold, it was not enough to make it a viable proposition. Instead, the company had to market an alternative and more conventional design. Closely resembling the 499cc Triumph of that era, and having the same bore and stroke dimensions (85x88mm), the most noticeable differences were the use of a Druid front fork and an XL-all spring saddle.

Took another route
Still sales failed to meet up to expectations, so Veloce Limited took another route. Lightweight two-strokes were becoming popular and towards the end of 1913 :they had their own 206cc model on display at the Olympia Show. Designed by Percy Goodman it was marketed as the Velocette, no doubt in an attempt to make it distinctive from the four-strokes originating from the same factory. Some members of the family were not too happy with this change of name, remarking that it was not far removed from flannelette! As it so happened, it was to have much greater impact in later years. The two-strokes built up such an envious reputation that when the company reverted to making a four-stroke again in 1925, they sold it as a Veloce. Not everyone realised it was made by the same manufacturer as the two-strokes, so the name was soon changed to Velocette. 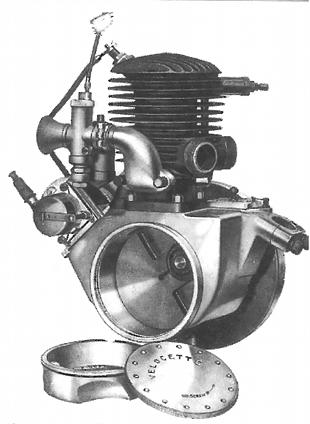 All of the two-strokes were of the overhung crankshaft type, a design that was used for many of the post-war cyclemotors. In the Veloce design an exposed outside flywheel was attached to the left-hand end f the crankshaft. The latter ran in a long phosper bronze bush in the crankcase casting, lubricated by oil picked up from the crankcase oil compartment by crankcase compression. The flow was regulated by an adjustable needle valve on the crankcase top.

Bridge the gap
With the depression of the late 20s now being felt, Veloce Limited needed something to bridge the gap between the more expensive 348cc overhead camshaft models and the cheaper but somewhat pedestrian model U ('U' derived from utility). Determined to use as many of their existing resources as they could, they decided to market a high performance version of the model U, harnessing all their expertise in two-stroke design. As a result the model USS was evolved, basically a model U in which special attention had been given to the cycle parts and particularly to the engine. To hasten the disposal of stocks of the model U, it was renamed model 32 and sold for that precise sum, with a blue painted petrol tank that shocked Velocette traditionalists!

Commencing with the cycle parts, the frame was identical to that of the model U. The front fork, however, though still of Webb manufacture, was fitted with adjustable side friction dampers and also a steering damper. The mudguards were of smaller section but there was no longer provision for a rear carrier, a lifting handle being in its place.

The engine differed in many respects. Although the same basic crankcase casting was used, attached to the full loop frame by two clamps at the front of the casting and by rear engine plates, as in the model U, there the similarity ended. A new cylinder barrel was fitted, with more generous finning, having a detachable cast iron cylinder head.

A decompressor was no longer included in the specification. Also dispensed with was the 'swan neck' induction stub used on all previous models. Now a 1 1/16" bore carburettor bolted direct to the cylinder barrel. The porting of the engine was gas flowed, the transfer port being much wider with a corresponding larger cutaway in the piston skirt. Still of the deflector type, the shape of the combustion chamber had been changed so that the sparking plug faced forward in the cylinder head.

Price wise, the USS sold for £42, compared to the £32 requested for the model 32. A differential of £10 represented a considerable gap when wages were low and the number of unemployed was rising.

One can only speculate why the USS was made – and for one year only, as only 262 were produced. Possibly it served also as a test bed for the engine of the model GTP launched a year later.

Today very few USS models exist. It was certainly fast and in one known instance recorded over 70mph on the road, fully equipped. In a 1929 issue of The Motor Cycle there is a photograph of George Wilks winning a South Midland Grass Track Championship on one. Like the Dirt Track Velocette, the USS was destined to become one of the company's forgotten models.