Velocette's overhead camshaft model had proved itself popular almost from its early beginning in 1925. Their Junior TT win in 1926 had such a profound effect on sales that they had to move to new premises in Hall Green, Birmingham, to increase production and keep pace with demand. Soon to be available in a number of different guises the K-series models sold at a rate of about 1000 a year until the economic depression in 1931 virtually halved this figure. Understandably, top of the range models became difficult to sell, but production of the K-series continued, with updating modifications as and when deemed necessary. In all probability they would have been partly subsidised by the introduction of the company's new and very appealing GTP two stroke from 1930 on, which gave them a firm foothold in the lower end of the market.

The introduction of the ohv MOV and MAC models in 1933 broadened Veloce Limited's range, to provide another option for prospective purchasers of their products. The MAC in particular gave rise to an unforeseen problem, unforeseen initially. It proved such a lively mount that it was in danger of outpacing the ageing ohc models. The latter, now available in only two versions, the sporting KSS and the touring KTS, both of which used an identical engine, had become increasingly heavier as the result of their continuous updating, which impaired their performance.

Now they had to carry full electric lighting equipment, four gallon petrol tanks and four speed gearboxes. Furthermore, the MAC model had totally enclosed valve gear whereas that of the ohc models was still exposed and prone to oil leakage. Something had to be done to restore the balance as the ohc models sold for £10 more than the MAC yet their performance was near identical. 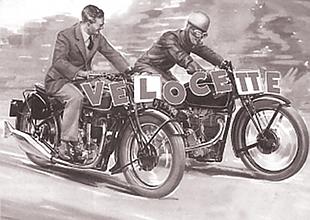 The answer was to develop a new ohc model more closely related to the company's very successful KTT racers. In 1935 Percy Goodman, the originator of the original ohc model, and Harold Willis, their gifted development engineer, started work on their new project. It would have been a busy year for them as a third 'M' series model had been introduced into that year's model range, the 495cc MSS. As it so happened its running gear proved to be of some significance as it would form part of the specification of the new ohc model. In a small company that did not have a large amount of working capital at their disposal, it was desirable to have as great a commonality of parts across the entire model range as possible. This is why a greater interchange of parts is found throughout the Velocette range than that of most other manufacturers.

Quite long period
There was a quite long period when no ohc model was available as production of the original ohc design ceased at the end of the 1935 season. As it was desirable to retain the old model designations KSS and KTS, it was decided the newcomer would be regarded as the MKII version, the old models to be referred to, retrospectively, as the MKI. The launch of the MKII KSS took place on the eve of the 1935 Motor Cycle Show at Olympia, ensuring the publication of a detailed description in The Motor Cycle's Show issue dated November 28.

Sharing the frame and cycle parts of the MSS model (with the exception of its 4" section rear tyre), the engine itself was quite a revelation. Although the overall concept was similar to that of the earlier models with regard to the arrangement of the camshaft drive and a narrow width crankcase, the most obvious difference was the larger and more heavily finned cylinder barrel, which belied the engine's 348cc capacity. On it sat a beautifully cast one-piece aluminium alloy cylinder head that totally enclosed the rocker gear. Only the top bevel housing was detachable and the two small covers that allowed access for tappet adjustment. Since the rocker arms were fully enclosed, valve clearance adjustment was effected by having eccentric rocker spindles. Engines prior to KSS 8101 had a separate side feed taken from the side of the top bevel housing via a short external pipe, to direct oil on to the cams. This arrangement was subsequently modified to exclude the external feed and give a cleaner look to the top end of the engine. A lug cast into the top of the cylinder head casting provided a better means of anchoring the head steady to the frame than the two short tubes used previously. Other differences from the original design included a modified cover to the lower bevel housing that incorporated the rear half of a new magneto drive chaincase, the front portion of which was affixed by nine screws. The magneto was now bolted end on to the rear of this chaincase, to dispense with the platform previously cast into the rear of the crankcase for base mounting.

The old lubrication system in which oil passed up the vertical coupling tube to the cylinder head at 8-10psi was retained, with means for pressure adjustment adjacent to the main oil feed inlet pipe. It drained back from the cylinder head from both valve gear housings through a 'Y' shaped pipe that fed into a housing in the base of the drive side crankcase half. Oil leaks were now a thing of the past, assuming care had been taken to pack the gland nuts at the top and bottom of the vertical coupling tube. As previously, the camshaft drive retained its 'hunting tooth' arrangement, which meant the loading on the bevels was transferred to a different tooth on each revolution of the engine. Although a very sensible arrangement it perplexed many owners and caused endless frustration when they had to remove the cylinder head to decoke the engine or for any other reason. There was a defined procedure to be followed on re-assembly if the valve timing was to be set correctly. Definitely a case of read the instruction book when all else is lost!

Manufacturers tried harder
New designs have always suffered 'teething problems' and in those days manufacturers tried harder to sort them out rather than let customers do the development testing as would be the case in later years. The biggest disappointment by far was that initially the new model had a maximum speed of only about 68mph. Ted Mellors, one of the works race team, was put on to road testing and gradually it was raised to about the norm for a standard KSS/KTS model. A KSS engine number and specification remained common to both models.

Even so, those who purchased an early MKII model did encounter a few problems. One was a spate of valve spring breakages which caused pieces of spring to find their way into the oil pump and shear its drive. Until the crankcases could be modified to incorporate a suction filter (after engine number KSS 8373) a small filter was fitted into the area where the two drain pipes join to make the 'Y' junction. The trouble was attributed to minute scratches in the unpolished wire from which the coil springs were wound.

Another problem was caused by oil seeping down the valve guides to give rise to a smoky exhaust. It was eliminated by fitting leather oil seals after machining a cup in the top of each valve guide to accommodate them. Thereafter the MKII models continued in production virtually unchanged until 1948, interrupted only by the war years. The only post war exception was the use of an Oleomatic telescopic front fork made by Dowty during the final year of manufacture as Webb were no longer making girder forks. KSS/KTS production ceased because too much time was being taken to assemble the engines. The bevels had to be meshed correctly by trial and error, which meant having to add or remove shims until they were just right. There were many who mourned the passing of this memorable model.