The overhead camshaft KSS Velocette was the flagship of the Velocette range, expensive to purchase but also costly to make. By the early Thirties it was becoming evident that at least one other model was needed to fill the gap between the KSS and the GTP two-stroke – cheaper to make and buy, but having almost the same performance. Initially, thoughts centred around a 350cc side valve and a prototype was designed and made. It proved a disappointment as not only was it well down on power, but also more mechanically noisy than had been anticipated. A complete rethink resulted in the 248cc MOV overhead valve model, which was launched in 1933. It turned out to be one of the best of this country's lightweights and continued in production until 1948, with a break only during the war years. 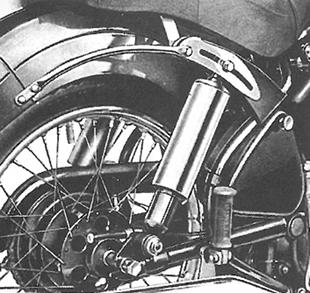 It had been possible to use less skilled labour in the assembly of the MOV as, unlike the KSS, the use of pushrods dispensed with the need to hand match the two sets of bevels used in the latter's overhead camshaft drive. There were advantages from the owner's viewpoint too, as the cylinder head of the MOV could be removed and refitted without fear of deranging the valve timing. Thoughts now turned to making a 348cc version, by increasing the stroke of the MOV engine from 68.25mm to 96mm. By doing so, it meant the same piston, valves and cylinder head casting could be used, along with the gearbox and most of the cycle parts.

Never a rich company, Veloce Limited always worked to a tight budget. By having as much commonality of parts as possible amongst the various models in their range, production economies could be achieved. This is where the MAC scored heavily. It cost little more than the MOV to make, but because it was a 350, it could be sold at a greater price (£49.10.0), £2 more than the MOV, at the time of its launch during late 1933.

Noisy timing gear
Despite some early teething problems, such as noisy timing gear, a clutch that was prone to slip and oil leaks from the rocker gear, the MAC proved a surprisingly lively machine and thereby brought to light a further unexpected problem. Although it cost £10 less than than the KSS model, it could match its performance, much to the disgust of those who had purchased the more expensive machine. The truth of the matter was that although the original KSS had a guaranteed maximum speed of 80mph, its performance had tended to fall off during recent years as a result of increasing weight through the addition of full lighting equipment, a larger fuel tank and other accessories. Indeed, Veloce Limited now quoted its maximum as 75mph in their 1934 catalogue. Short term, there was little that could be done, but long term it led to a substantial redesign of the KSS, culminating in the Mark II version of 1936. That, however, is a separate story. 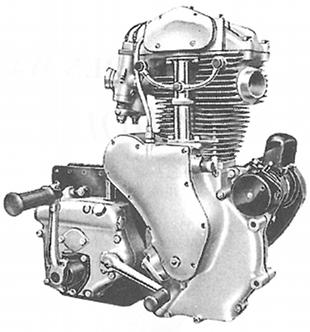 The MAC continued more or less in its original specification right up to the outbreak of war in 1939, although some may be surprised to learn that in its first year of manufacture it was not fitted with the familiar fishtail silencer. The main body of the silencer was lozenge-shaped, the outlet being a very short pipe, its end cut on a slant to discharge the exhaust gases away from the machine, similar to that of the MOV at that time. The early MACs also had a leather-faced toolbox, shared with the other models (except the GTP which was of a different shape) that continued until the 1937 season.

A military version of the MAC was produced during the war. The first consignment was allocated to the French army, but when a few shortcomings became apparent, modifications were made that led to an improved MAF model. The most noticeable differences related to the modification of the lower part of the frame, in which the horizontal tubes below the engine were replaced by a massive malleable lug that strengthened the frame at the same time. More obvious was the redesign of the silencer, which was of the barrel type, fitted with a fishtail end. There were other minor mods too, and as certain raw materials became scarce, the rubber handlebar grips were replaced by canvas and cast-iron bushes used, to replace most of their phosphor-bronze counterparts in the gearbox and even the oil pump driving worm. When aluminium became scarce, some timing covers and gearbox end covers also appeared in cast-iron. 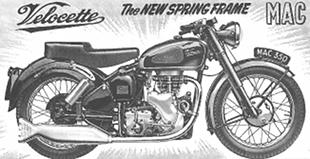 n of civilian models was resumed after the war, the MAC carried on much as before, but using the revised wartime frame, until 1948. By then, H.C. Webb & Co., had decided to discontinue the manufacture of their girder fork, so an alternative had to be found. As the telescopic front fork was now very much in vogue, a suitable replacement in the shape of the Dowty Oleomatic fork, also used by Panther, Scott, EMC and others was adopted; it relied solely on compressed air as the suspension medium, with oil for the damping action. The design used by Velocette differed in having its front wheel spindle mounting lugs in front of thelower (sliding) fork legs, and to provide adequate clearance on full lock, the petrol tank had to be moved slightly rearwards.

If everything had gone according to plan, the MAC should have been phased out at the end of the 1948 season, along with the MOV, MSS (500cc 'M' series model) and KSS models, to allow the mass production of the new 149cc LE flat twin. Because demand for the MAC continued, it alone was allowed to remain in production. In 1951 Velocette's own design of telescopic front fork replaced the not entirely satisfactory bought-in Dowty, and a year later the MAC engine was redesigned to make it more up-to-date, in keeping with the times. Retaining the original 68mm x 96mm long stroke engine, the cylinder head had been totally redesigned, being cast in light alloy with an integral rockerbox. At the same time, the familiar 'map of Africa' timing cover retained its outline, but was now of a more rounded shape and devoid of any lettering or the manufacturer's name. It was a prelude to what was to follow for the 1953 season – a spring frame MAC of the pivoted fork type, that differed from its rigid framed predecessor.

Heavier than the rigid frame version by almost 25Ibs, the new spring frame MAC was still capable of 70mph and, in the eyes of many, the best handling of the company's post-war road models. It too inherited a legacy from the past, a long barrel-shaped silencer that had no fishtail. This lasted for only a year, until a smaller version of the original fishtail silencer had been developed and tested, to replace the somewhat lengthy rigid frame version. It wasn't just this departure from standard practice that was to shock some of the dyed-in-the-wool Velocette enthusiasts, but also the possibility of being able to purchase the MAC in an alternative Willow Green colour finish from 1955 on. Black and Gold had become sacrosanct. It nearly provoked letters to The Times! Irrespective of colour, the spring frame MAC continued virtually unchanged until production finally ceased at the end of the 1960 season. 26 years of continuous production had not been a bad record, for any manufacturer.