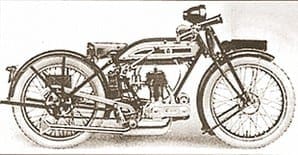 It is widely believed that Triumph acquired its 'trusty' nickname as a testimony to the outstanding service given by the model H during the 1914-18 war. Although true to a point in view of the arduous conditions under which 30,000 of these machines had given exceptional service in the mud and devastation of France, Triumph had already acquired this attribute long before hostilities had begun.

The early beginnings of the company can be traced back to 1884, when Seigfried Betman left his home in Nuremberg, Germany, and made his way to London, via Paris. His first job as with Kellys Directories, in the Strand, and it was there that he made many useful business contacts. Within a year or so he branched out on his own and after a somewhat hesitant start he decided to take advantage of the current boom in bicycles by marketing his own brand under the name Triumph.

Having no manufacturing facilities of his own at this time, he bought ready-made bicycles from a Birmingham manufacturer and merely added his own transfer.

He chose the name Triumph because the name would be recognised in England, France and Germany. Initially, all were exported but as business grew Triumph bicycles began to appear on the home market too. 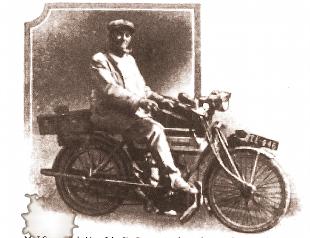 By 1887 the business was sufficiently well established for Bettman to take on a young junior partner, Mauritz Schulte, a trained engineer. He knew the only way ahead was to make bicycles himself and with this in mind the embryo Triumph Cycle Company began to look for a suitable site in the City of Coventry. With a capital of only £650-it was a bold step to take, but when a disused factory in Much Park Street was found, additional shareholders helped raise the amount to £2,000.

What really put the company on its feet was some unexpected financial aid from Dunlop, who foresaw a bright future for the as yet still struggling company. It resulted in raising the capital to £45,000 and the formation of the Triumph Cycle Co. Ltd., with limited liabilities. Now the company could give serious thought to the manufacture of motorcycles as well as bicycles and by 1902 they were busy formulating plans.

Initially, Schulte had looked at the possibility of making the Hildebrand and Wolfmuller under licence, and then to build Humber tricycles. Both designs appeared somewhat antiquated even then, so perhaps it was fortunate that no firm decision was made until the following year, by which time Minerva had a much more suitable power unit to offer. A prototype machine was built fitted with their latest 2¼hp engine, and also two other alternatives, fitted respectively with a JAP and a Fafnir engine of approximately similar size. Still unconvinced this was the way to go, Schulte decided the only sensible approach would be to manufacture a complete machine, engine and all. Thanks to Charles Hathaway, who carried out all the work in the drawing office, Triumph went into production with a 298cc engine of their own manufacture, having ball bearings throughout.

Early pioneering days
In these early pioneering days, publicity played an all important role in helping bring to the public all the advantages of a new model. The Reverend Basil H. Davies (otherwise known as Ixion) was already writing a regular column in The Motor Cycle, so in 1905 Bettman and Schulte arranged an ambitious test for their new model, in which he would ride 200 miles a day for six days, supervised by an officially appointed observer and starting out each day from Oxford. Initially the test failed when the engine gradually lost power, and more disastrously when the twin front down tube frame broke after the first 1000 miles had been covered. Effecting repairs to the engine and putting it into a new single down tube frame over the weekend, the test was re-started and completed satisfactorily. At its conclusion, 1,279 miles had been covered, even though Ixion had to strip the engine every evening and regrind the valve seatings. It proved a valuable lesson learned in more ways than one and resulted in a greatly improved 1906 model.

Although the motorcycle had by now begun to shake off its frail and temperamental image, it was now faced with another problem. From 1906 until 1909 new registrations had fallen significantly as confidence had been undermined by newcomers cashing in on the motorcycle's growing popularity. Many of these back street 'manufacturers' were selling machines of dubious quality, often accompanied by extravagant claims that were difficult to substantiate. Fortunately, Triumph's all ball bearing engine was one of several new designs that helped to restore confidence, aided by the fact that the company could now offer a really effective spring front fork. 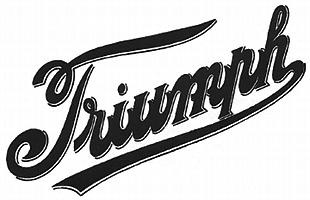 Furthermore, following an increase of engine capacity to 50cc in 1907 and the introduction of a rear hub clutch, it was no longer necessary to run and jump or to use the pedals to make a standing start. A three speed Sturmey Archer hub gear followed, giving the rider even greater flexibility.

Compliments about the new models began to flood in to the Triumph factory, by now moved to larger premises in Priory Street.

Published by Triumph
The annual catalogue published by Triumph was proud to reproduce extracts from them, including one from Ixion himself who claimed "As I ride chiefly on Saturdays, it would be a serious matter for me if I failed to return in time for my Sunday duties. With any other make it would be anxious work to be 100 miles from my church at 4pm on Saturday. Riding other makes I keep close to the railway lines as a precaution, and carry a timetable." The 'trusty' Triumph had indeed arrived and it was largely through testimonies such as these that the new found nickname became almost a factory slogan.

If any further proof was needed, it came in 1908, when Jack Marshall won the Single Cylinder Class of that year's TT races, the second of the series to be held in the Isle of man. For good measure, Triumphs also finished in third, fourth, fifth, seventh and tenth places. Many saw it as the ultimate test, and in the following year something like 3,000 machines left the Priory Street Works. Competition successes never failed to bring in new customers. The motorcycle regained its respectability and the number in use during 1910 rose to 36,242. Improvements in the range continued, with further increases in engine capacity to 499cc and in 1914 to 550cc, to cater for sidecar users. The three speed countershaft gearbox was now also about to make its appearance, following a factory announcement towards the end of 1914.

However, it was not until February 1915 that the first model came off the production line, in good time to provide sterling service for despatch riders in the Great War when 'trusty' was already a by-word. Even so, it was only just the early beginnings of the Triumph story. A lot more was to happen in the years that followed as we all know.