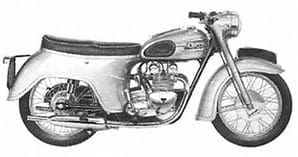 When Edward Turner first showed his revolutionary Speed Twin to the Press at the end of July 1937, it was his long-term intention to phase out all of the single cylinder models and replace them by twins. Had it not been for World War 2 this might well have happened much earlier than it did. The Tiger 100 appeared at the November 1938 Motor Cycle Show, and had not the war intervened, the 3T 350cc twin would have been launched at the 1939 Show that had subsequently to be abandoned. In point of fact the 3T came very close to being brought to the attention of raders of one of the motorcycling weeklies. It was to have featured in a front cover advertisement before the show and as was customary, these covers had been printed in advance. All had to be scrapped when it became apparent there could be no 1939 show. Nine years would elapse before the 3T actually came on to the market. A much sportier Tiger 85 should have followed it, in the traditional Tiger colours, but that never materialised at all.

The odd man out
In many respects the 3T was the odd man out in the Triumph range as it was Turner's aim to have as many parts as possible common throughout the whole model range. This made good sense because the economies that resulted not only ensured a better profit margin but also meant prices of the individual models were easier to keep at a competitive level.

For some unknown reason, the 3T did not fit into this pattern. It used a quite different frame and mudguards from its larger capacity counterparts and furthermore had an engine that differed in a number of respects, especially with regard to the crankshaft assembly and the cylinder head. If anything, the engine seemed to owe more allegiance to the 3TW military prototype that was under test by the army during 1939. 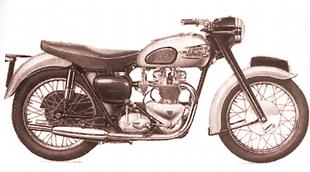 On paper, a 350cc twin seemed to have a good potential, as this capacity class attracted a large number of motorcycle enthusiasts. Its many advantages included the fact that a 350 was not as heavy as a 500 yet would provide a sufficiently good performance to satisfy the requirements of most and would also carry a pillion passenger with ease. Added advantages were a lower insurance rating and an overall fuel consumption figure of around the 65-70mpg mark. One might well have thought a 350cc twin would have fitted in well with these requirements, especially if it had a smooth-running engine less prone to vibrate than its larger capacity brothers. Yet somehow the 3T failed to make the grade. Never an outstanding performer it was easily seen off by many of its contemporaries and as sales failed to rise above a moderate level it was quietly dropped from the range at the end of 1951 season.

In the years that followed, two lightweight singles, the 149cc Terrier and its successor, the 199cc Tiger Cub, met the lower end requirements of the Triumph range. But there was still a gap that needed to be filled as the jump from a 199cc single to a 500cc twin was too high. What was needed was another 350cc twin that not only had the performance but in addition had something special to offer by way of styling. It was in this latter area that Edward Turner really specialised and it was he who came up with the right answer.

Entirely new 350cc twin
During February 1957 Triumph introduced an entirely new 350cc twin, with its engine and gearbox built in unit and with the rear half of the frame semi-enclosed. The Triumph 21 had arrived. The model number was cunningly derived as at its time of introduction the new model marked the 21st anniversary of the Triumph Engineering Company. Furthermore, as the new model was also to be exported to the USA, 21 was the equivalent of 348cc in cubic inches, the way in which engine capacity is measured in America! Turner had now come to the conclusion that motorcycling deserved a better image and being aware of the inroads made by scooters he decided it was high time to provide motorcyclists with better built-in weather protection. At the same time he reasoned that if the public saw more cosmetically attractive motorcycles with their working parts enclosed, they may no longer regard them as dirty and oily objects of derision. 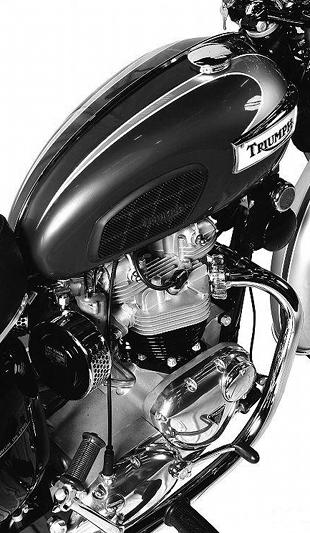 Dealing firstly with the engine-gear unit, the design of the former followed along the broad lines of the original pre-unit engine, the characteristic shape of the timing cover being retained even though it was somewhat smaller in size. The crankcase assembly now also contained the four speed gearbox, removal of its polished end cover giving easy access to its internals. As the engine and gearbox were now built in unit, their centres could not be changed in relation to each other, hence a primary chain tensioner had to be fitted to compensate for chain wear. A duplex chain was fitted and an alternator surrounded the drive end of the crankshaft. This meant a shock absorber had to be incorporated in the clutch centre.

The crankshaft followed customary Triumph practice in having a centre flywheel but whereas Hiduminium had been used previously for the connecting rods, they were now steel stampings, with split shell-type big end bearings. Each carried a flat top piston with two compression rings and one scraper. The close-pitch fin cylinder block was in cast iron and the cylinder head in light alloy. The latter had a branched induction passage, fed by a single Amal monobloc carburettor attached to a Vokes air filter. Both rocker boxes had distinctive circular threaded rocker inspection caps with a cruciform indentation in place of the old hexagon.

Welded construction
The frame was of tubular lugged and welded construction, the lower end of the front down tube branching into a duplex tube cradle that ran below the engine unit. It was unusual in having only a lower tank tube, leaving the steering head unbraced at the top. The petrol tank was used to deputise for the missing upper structural member. A two way damped telescopic front fork carried the familiar Triumph headlamp nacelle and the rear suspension followed the conventional pivoted fork layout. Both wheels were of 17" diameter with 7" diameter hub brakes, the front wheel having a full width hub. The tool kit was stored in a tray below the hinged dual seat, which also provided access to the oil tank filler cap, the air filter and the battery. The individual tools fitted into shaped cut-outs in the tray, with no spare space.

The most outstanding features were the heavily valanced front mudguard and what is best described as a 'canopy' that enclosed the rear end of the machines and the top half of the rear wheel. It resembled an upturned hip bath and was soon referred to as a 'bath tub' fairing, bringing another odd piece of terminology into the vocabulary of motorcyclists.

The first press road tests showed the Triumph 21 was a much livelier performer than its 3T predecessor and capable of speeds in excess of 70mph. It was the first Triumph to have a unit-construction engine; thereafter this type of engine would gradually replace the pre unit design still in use amongst the other twin cylinder models in the range. Strictly speaking, the model 21 existed for one year only 1957, the anniversary year. Thereafter it continued as the model 3TA.

As may be expected, not everyone took to the new enclosures and many were soon ripping them off to replace them with more conventional mudguards. This was especially the case in the USA, although the 21 and 3TA models were never good sellers in a land where 'big is best'. Those who desired a little more from the same capacity had to bide their time until 1962 when the 348cc Tiger 90 model was added to the range. By the time that had happened the 3TA had already lost its 'bath tub' rear enclosure in favour of a more revealing 'skirt', whilst the new model had no rear enclosure at all. The 'bath tub' might have seemed a good idea originally, with every prospect of enhancing the motorcyclists' image. One vital point had been overlooked, however.

Motorcyclists tended to be very set in their ways and resistant to change. Anything that appeared the least bit 'cissy' was definitely out. Even so, the 3TA had remained in production for 10 years and the Tiger 90 for seven; perhaps it was the compact unit-construction engine that made all the difference.