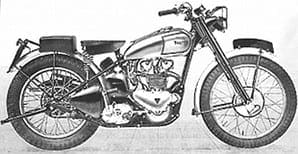 Edward Turner, the Managing Director and Chief Designer of the Triumph Engineering Company held firm views about the extent to which manufacturers should take part in off-road competition events. He considered it futile to spend vast sums of money trying to win races when it could be better deployed in making better motorcycles to sell. He realised, of course, that competition successes helped sell more motorcycles. Since it was possible to adapt models in Triumph's current production range to compete quite successfully in some of these events, he felt justified in providing them with factory-based support.

Although road racing never featured strongly in his plans, Turner entered a specially-prepared Tiger 100 in the 1946 Senior Manx Grand Prix. Prepared by Freddie Clarke, Head of the Experimental Department, it featured the alloy cylinder head and barrel from one of Triumph's war-time generator engines. It also marked the first appearance of Turner's ingenious rear spring wheel, which gave the rigid frame a rudimentary form of rear suspension with limited movement.

Appalling weather
The Senior Race was run in appalling weather conditions, and it is now history that Ernie Lyons rode the Triumph into first place. It led to the production of the Triumph Grand Prix model, of which less than 200 were made (although many more seem to have survived judging from those in evidence today!). A fast machine, with a glorious exhaust note provided by its twin megaphones, the engine was decidedly fragile when pressed hard. 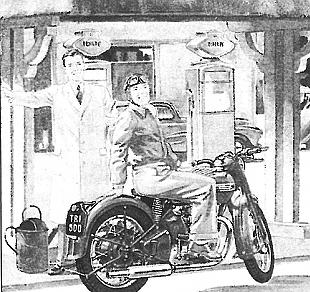 The navigational department left a lot to be desired too. Although a Grand Prix model won the Senior Manx again in 1948 ridden by Don Crossley, it was soon abandoned in favour of a race kit with which to convert a standard Tiger 100.

Turner and his senior management had also been taking a serious look at trials and scrambles. Around the Coventry area, one name consistently appeared at the top of the results sheets – that of Jim Alves. Jim rode a MAC Velocette in trials and a Triumph 3HW in scrambles, and was asked if he would like to try a Triumph twin. He agreed, and the factory provided a specially modified 3T. His first big event riding the twin was in the 1946 Cotswold Cups Trial, which he won, to prove a twin can be just as successful in trials – if it is in the right hands. Triumph were now able to form a trials team.

Variety of problems
Although the first post-war ISDT was held in 1947, a variety of problems prevented the British manufacturers from entering factory-supported teams. The year following, when this prestigious event was held in San Remo, Italy, Triumph entered a team comprising Jim Alves, Allan Jefferies and Bert Gaymer. They were mounted on 5T Speed Twins specially prepared by Henry Vale and fitted with the top end of the alloy generator engine (painted black) to help reduce the overall weight and ensure the 2 into 1 exhaust pipes were tucked well in. Their entry was rewarded by three Gold Medals and a Team Prize.

Even so, the twins were still too heavy and did not handle as well as they might. The inevitable post mortem resulted in the creation of an entirely new model retaining the all-alloy engine – the TR5 Trophy Twin model, its name derived from Triumph's success in the 1948 Trial. 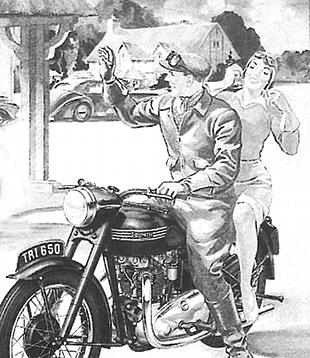 In the eyes of many, this was the prettiest-looking of all the Triumph Twins of that era, yet very functional too. The new model made its debut at the 1949 Earls Court Show, alongside the actual machine ridden by Jim Alves in that year's ISDT. Weighing around the 3001b mark, it had a shortened wheelbase rigid frame and was fitted with a 20 inch front and a 19 inch rear wheel, the latter shod with a 4.00 inch section tyre. Ground clearance was inches. A 2½ gallon fuel tank ensured a good steering lock and although supplied with a full lighting set, the headlamp had a plug-in harness to make it quickly detachable. There was also provision for removing the dynamo and blanking off the rear of the timing cover. Although the spring wheel was listed as an optional extra with all the Triumph range, it was rarely supplied with a Trophy. At that time, rear suspension was considered unsuitable for use in trials.

The new TR5 Trophy Twin retailed at £200.13s.3d inclusive of Purchase Tax, but as all Triumphs were in short supply and there was a long waiting list, only the favoured few were likely to get early delivery.

The Trophy Twin also added a touch of flavour to the scrambles scene (though without the spring wheel!). Apart from Jim Alves, many other famous names were associated with it, including John Giles and Bob Manns, one of the factory's own testers. Many will recall the wasp-like exhaust note from its small diameter straight-through exhaust pipe.

Continued unchanged
The Trophy Twin continued unchanged for the 1950 season, retaining the generator type cylinder head and barrel. However, when the Triumph range for 1951 was announced, it inherited the new close pitch finned cylinder head and barrel from the new Tiger 100. Although a two into one exhaust system was still favoured, the exhaust ports now splayed outward. This arrangement gave the Trophy Twin a different appearance, even though its overall specification was virtually unchanged. It continued in this form until 1955, with a change to a duck egg blue colour scheme in 1954. 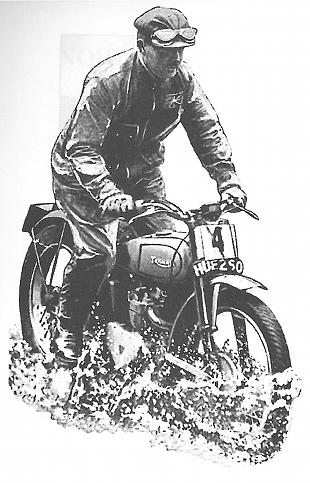 By 1955 the spring wheel had outlived its somewhat dubious usefulness, especially as the works scramblers had been using a spring frame in 1954. It was dropped from production in favour of entirely new frame with pivoted fork rear suspension, which increased the overall weight of the Trophy Twin to 3651bs. The price increased too, to £234 inclusive of Purchase Tax.

Now the original lightweight TR5 model was rapidly losing its original identity as well as some of its characteristics. The engine, for example, although outwardly identical identical, was now of the high compression type. There was even the option of a 650cc version in 1956, a throwback to the 1951 ISDT when one of the works entries had been fitted with a 650cc Thunderbird engine.

Links with the past were finally severed in August 1958, when the TR5 Trophy Twin was dropped from production. Although the name lived on in the TR6 model, first introduced in 1957, it was a road model and continued as such until it was discontinued in September 1960.

It is pleasing to find the Trophy name has been rejuvenated by the Triumph Motorcycle Company. Although it now relates to a four cylinder model, fittingly it is again helping bring prestige to the once all but dead British motorcycle industry.
Long live the Trophy!