The Sunbeam name was always closely associated with 'quality' and when the very first motorcycle to bear the name left the Wolverhampton factory in 1912, it was to the highest possible standards of the time – a gentleman's machine.

The original makers however, were no longer the masters, when the big fat shaftie S7 rolled out of the BSA company's Redditch works in 1947, after several false starts. BSA had bought the Sunbeam name during the war years from the then owners, Associated Motor Cycles and set about making their idea of a luxury tourer to carry on the Sunbeam tradition. The S7 was black, but that was where the similarity with any previous Sunbeam quickly finished.

There was a very close similarity in appearance to the German BMW, not exactly acciden­tally either; the telescopic forks, plunger frame, shaft drive, clean handlebars with inverted levers and other details having a Bavarian look about them. The engine though was very dif­ferent, a 487cc in-line vertical twin with overhead camshaft operation of the valves; a rehash of a BSA design that had been on ice since the early 30s. 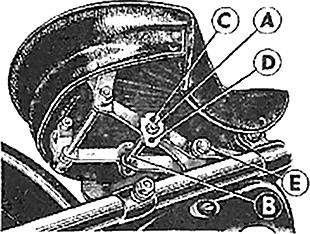 The man responsible for the new bike was Erling Poppe who came to the project straight from design­ing heavy four wheel drive vehicles, although his ear­lier days had included a spell as joint manufacturer of the P & P motorcycle (Packman & Poppe). It wasn't therefore perhaps too surprising that Mr Poppe turned out a !car on two wheels'. The first models were not a great sales success and a very early modification had to be made to rubber mount the engine, in an effort to counter excessive vibration, other limitations in the design of the wick-lubricated undamped suspension, the uncertain handling on the wide section 16" tyres and mediocre performance. All mitigated against what should have been an outstanding new BSA product. By the Spring of 1949 less than 2,500 S7 Sunbeams had been sold and it was time to either quietly drop the bike, or to think again. A rethink won the day and from it came two revised models, the S8 and S7 De Luxe.

The S8 was an altogether lighter looking motorcycle than its predecessor, with standard BSA hydraulic front forks, wheel and brake, the rear suspension was also standard Beesa plunger practice. 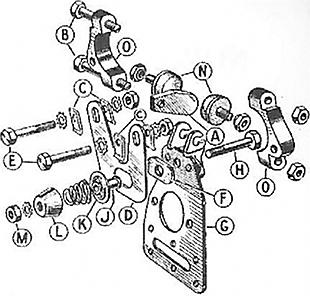 Opportunity was taken to tidy up the engine mount­ings and to control the 'shake' from the rubbers, by a complicated damper arrangement. See illustration on right.

All the improvements were incorporated into the new S7 too, this now carrying the designation S7 De Luxe and so, whilst it appeared similar to the earlier bike, it was very much improved. If you see a shaft drive Sunbeam around today, or are offered one, it will almost always be one of the 1949-on models, if in any doubt just check the engine and frame numbers. The S8 code, prefixes both numbers on S8 models, while on the S7 De Luxe frame number began at S7-2501, the engine however having an S8 code; just like its lighter brother. Pre 49, the S7 prefix applied to both frame and engine. With little further development, the two 'Beams ran on until 1957, when they were quietly dropped from the lists.

The S7 De Luxe came in two colour finishes, either mist green for tank, mudguards, forks, toolbox etc, with black frame and wheels; or in all black, as for the 1947-49 machine. The S8 sported silver grey on a black frame with chromed wheel rims, as its alternative to the all black.

Both models had good detail touches, like the manner in which the electrical components were grouped together in the box beneath the saddle on the off side; spare bulb holders even being provided in the box lid. The battery lived inside a matching box on the nearside, with a sepa­rate toolbox fixed to the frame beneath it. An interesting cantilever saddle, hard to find today, with spring inside the frame top tube graced the S7; the Eight having a conventional three point mounting. 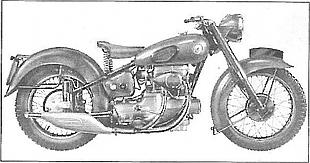 BSA pattern dualseats were later optional on both. The nearside headlamp bracket of the S7 incorpo­rated a very neat licence holder that indicated the thought and intentions that had been put behind the Sunbeam, when originally conceived. A great pity that it was never to realise those early hopes. But, whatever, they must have been sturdi­ly made, for they have sur­vived in considerable num­bers to grace the classic scene today. As the 1952 catalogue put it "Superlative in design and splendid in performance, the two Sunbeam models described in these pages enhance the traditional quality and dig­nity, which has long been associated with the name, Sunbeam". They could write a good line at Small Heath.