The Sun Cycles and Fittings Company Limited, of Aston Brook Street, Birmingham, bad a long association with the British motorcycle industry. Founded by the Parkes family in 1885, their first involvement with two wheels was when they made the Sun Spider, a penny-farthing bicycle.

In 1911, they moved into the manufacture of motorcycles, offering three models fitted with a single cylinder four-stroke engine made by Precision, ranging from 270cc to 599cc capacity. When Villiers started making engines in 1913, they bought in their new 346cc four-stroke engine to add an extra model to the range. It proved a short-lived addition though, as when Villiers decided to make only two-stroke engines Sun decided to follow suit and market a two-stroke instead. It marked the beginning of a long association with the Villiers Engineering Company which ceased only when, in mid-1961, the company's Chairman, Fred Parkes, announced his retirement after 48 years with Sun. 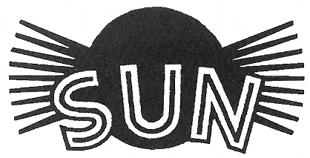 Motorcycle production had not been continuous throughout this period, however. Although Sun produced some very fine motorcycles during the twenties that included a JAP-engined 650cc vee-twin, the recession caught up with them and motorcycle production ceased by the end of 1932. Fortunately, the company continued in business by reverting to the manufacture of bicycles, so that they were not lost to the world of two wheels completely.

Not long after the end of World War 2, Sun re-entered the motorcycle market, in 1946. They began with a 98cc autocycle, and a couple of years later added a 98cc two-speed motorcycle with a rigid frame and a girder front fork. Remaining faithful to Villiers, the autocycle was fitted with their single-speed Junior De Luxe engine, superseded at the 1948 Motor Cycle Show by Villers new single-speed 2F unit. The motorcycle, which made its debut at the Show, had a similar engine unit, with the advantage of a two-speed gear operated from a trigger control on the handlebars. A particularly appealing feature of the early post-war models was the tank transfer, in the form of a golden sunburst with the word 'Sun' superimposed across it.

Sun range expanded
Throughout the fifties the Sun range expanded, always remaining faithful to the Villiers engine for the motive power. The autocycle has been dropped by the end of the 1950, and in deference to the trend at that time, a telescopic front fork had become a standard fitment. Plunger rear suspension, followed by the more popular pivoted fork arrangement, was offered in due course, by which time the range also included the Challenger competition model in either trials or scrambles trim. A handsome maroon finish now added a touch of distinction to complement Sun's range. The company was not hesitant to break into new markets either. When the scooter boom of the fifties was gathering momentum, the Sun Geni made its debut in 1957. Although powered only by a 98cc 6F Villiers engine, it had a number of novel features, not the least of which was wheels of 15 inch diameter and stylish bodywork. A larger capacity model, the 174cc Sunwasp scooter, followed later. 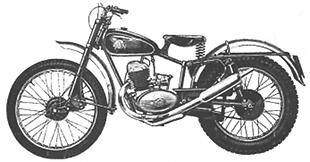 It was the introduction of Villiers 250cc 2T twin cylinder engine in late 1956 that gave the company its biggest boost. By using this engine to power their new Wasp twin (soon re-named Overlander).

Sun could now boast a high performance model, capable of almost 70mph with what they described as 'extraordinary acceleration'. Fitted with an Armstrong leading link front fork and a deeply valanced front mudguard, the sturdy frame incorporated an enclosure similar to that of the Sunwasp 200cc single, immediately behind the power unit. It helped deflect water and dirt from the pillion passenger's legs, aided by the deeply vallanced rear mudguard that tucked in behind this fairing. Rider and passenger comfort was provided by means of a deep, Dunlopillo-filled dualseat made by the Latex Cushion Company. Finished in quaker grey, with a two-tone finish to the fuel tank (or an optional chromium plated panel), the Overlander was a handsome machine by anyone's standards. It retailed at £183.19s.6d, inclusive of Purchase Tax.

Motorcycling weeklies
A road test carried out by one of the motorcycling weeklies in 1958 confirmed the Overlander lived up to its manufacturer's claims in their catalogue, who proudly stated 'This really is Britain's Premier Lightweight'. With a maximum speed fractionally under the claimed 70mph, it was economic on fuel, returning a surprisingly good 112mpg at an average speed of 30mph, which fell to only 90mpg at 40mph and never below 80mpg throughout the entire test. The acceleration was zestful, and the engine smooth, apart from a vibration period through the footrests at 50mph.

Despite the relatively high mounting of the engine unit (there was 10 inches ground clearance from the lowest point of the crankcase casting) the handling was described as excellent, due largely to the Armstrong front fork. The front brake, however, lacked bite despite its full-width hub appearance. 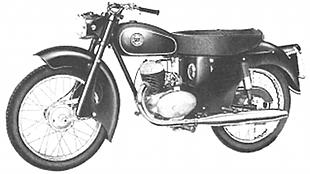 Fortunately, when both brakes were applied together, the stopping distance was good, even when they were applied fiercely. The lighting was adequate for maintaining cruising speeds of 40 to 50mph, but above that, the 51A. inch diameter headlamp with its 30/25 watt bulbs was not quite up to scratch.

Criticisms were few. The relatively high mounting of the engine unit, allegedly to make the machine more suitable for export, meant the kickstarter was correspondingly high mounted. Furthermore, its crank came to rest at an awkward angle, forward of the centre of the kick-starter spindle. The engine also needed to warm up before the choke could be fully released.

The tester's only real complaint was that the centre stand was too close to one of the exhaust pipes, which resulted in his shoe getting an oily toe cap whenever the former was lowered. These, however, were obviously only minor criticisms which detracted little from the overall impressions of the Overlander.

When Fred Parkes resigned as Chairman of the company, the business was acquired by Raleigh Industries of Nottingham, who sustained it for only a very short period before the Sun name was allowed to pass into oblivion. Perhaps it was just as well because when Villiers announced in 1965 that they would no longer be able to supply their engines to to other manufacturers, Fred would have been forced to look elsewhere. After purchasing his first engines from them way back in 1913, it would not have been easy to make the break after such a long association, let alone to find a satisfactory alternative source.