This story begins in the 1960s, at a time when the two stroke had already begun to show it could offer a serious challenge to its four stroke counterparts in trials and scrambles. The Villiers two stroke engine had come a long way since it was regarded as little more than a power unit for lawnmowers or for a whole host of lightweight machines used either for entry into motorcycling or as a cheap and reliable means of commuting to and from work. In 1964 Frank Hipkin, an active trials and scrambles rider, was running a motorcycle business in Station Road, Handsworth, Birmingham. Seeing a bright future for lightweight competition models, he decided to make use of a small lock-up garage next to the shop and build his own scrambles bike. Much like the Rickman brothers, he knew from riding in competition events that the over-the-counter factory models all seemed lacking in certain respects. Having his own ideas about the ideal scrambler, he set about designing a machine that would incorporate as many of them as possible.

His first machine was based on a Cotton Cougar duplex tube frame, fitted with a Norton front fork. Enginewise, he used a Villiers bottom end fitted with an Alpha crankshaft, to which he fitted a Greeves cylinder barrel.

The resulting 246cc hybrid scrambler showed promise and soon he had been prevailed upon to make a further half dozen or so to meet the requests from fellow AMCA members. It seemed a good opportunity to go into limited production, so Frank purchased an old house in Cross Street, Smethwick, to provide the extra space needed and was soon building from four to six machines a week, which he sold under the Sprite name. By selling them in kit form, purchasers could avoid paying Purchase Tax and buy them at £224.10s, an important consideration for an up and coming generation of new riders. 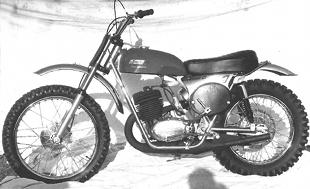 A 250cc trials model, using a Villiers 32A engine/gear unit, was soon available as an alternative, followed by the introduction of a new frame of Frank's own design which would accept a 500cc unit-construction Triumph engine. It was of the oil-in-frame type, having a distinctive rectangular top frame tube. At the same time, the scrambles model was converted to battery and coil ignition, dispensing with the less reliable Miller flywheel magneto used previously. By this time Frank's supply of Norton front forks, which he had bought as a job lot, had all but dried up, so he substituted his own leading link design which used units of Girling manufacture.

Sales progressed well and soon all the available space at Cross Street had been stretched to its limit. A move to a new factory in Eel Street, Olbury, provided the sorely needed extra space, by which time further improvements had been made to both the trials and the scrambles model, accompanied by a small but useful reduction in price.

Furthermore, the kits could also now be purchased without a front fork if the purchaser wished to use his own, giving the option of yet a further reduction in price. The factory were now able to supply the tanks, seat bases, mudguards and side covers, with the added advantages of lightness in weight and durability.

When the Sprite started showing how successful it could be in club level events, America began to show an interest. A first export order resulted in a few scramblers being despatched to California during February 1966, with the choice of the updated Villiers 34A or 36A engine units. For the first time, Sprite were able to field a works team this year, comprising Sam Cooper, Dennis Jones and Chris Leighfield.

Mick Wilkinson
They also loaned a forth machine to Mick Wilkinson, a young up and coming rider of whom much would be heard later. The team made their debut in the Victory Trial, in which Dennis Jones was unlucky enough to just miss winning the Under 21 Cup. It was only a matter of time before he brought Sprite the recognition it needed by winning the Greensmith Trial and the Manx Two-Day Trial. Even more promising was the news that Terry Challinor and Brian Hutchinson would be riding for Sprite in 1967, the former using a Husqvarna engine and the latter a 360cc Maico unit.

During December 1967 Sprite Developments Limited was set-up, after the factory had taken space for the first time at the Earls Court Show. Now they had available their own nickel-plated frames and a long-travel front fork, as well as the addition of a new scrambler to the range, powered by the Villiers Starmaker engine. The future was looking good until Villiers found themselves in financial difficulties and had to cease production. With their engines no longer available Sprite, amongst many other manufacturers, faced a problem in finding a suitable replacement. Their response was typical, they made their own 360cc scrambles engine, based on the equivalent Husqvarna unit that was proving very successful at that time. From the trials viewpoint the best option seemed to lie in the 125cc Sachs engine, making what in effect amounted to a mini trials model. It proved to be a fashionable move, as Greeves were one of several other manufacturers who followed suit.

Sprite scambler
Towards the end of 1968 yet another Sprite scrambler appeared, the Goldfinger, a 405cc two stroke. It scored quite a few impressive performances in the once very popular BBC television scrambles, bringing the names of Sprite, Dave Smith and Terry Challinor to a large number of regular viewers.

By this time Sprite Developments were getting a bit spread out, as they owned a small foundry in Tipton that made their light alloy castings, and also had a stake in a machine shop that made repetition parts. When a major contract had been negotiated for the supply of a considerable number of scrambles models to American Eagle in the USA the obvious answer was to bring all the operations under one roof. This was achieved by the acquisition of a factory in Stourbridge Road, Halesowen, which also provided the extra production space that would now be needed.

Several thousand machines were likely to be required, backed up by a considerable quantity of spare parts. Other contracts were also in the offing for the supply of machines to the Continent, to add the icing to the cake.

However, as so often has been the case in motorcycling's chequered history, shipments to the USA had already begun when Americal Eagle collapsed and the project went sour. With virtually everything depending on the American contract, Sprite found the rug had been pulled from under them.

Britain lost yet another of its motorcycle manufacturers for whom at one time the future had looked so rosy. A pity, as they were such attractive-looking functional machines that conveyed a feeling of confidence.