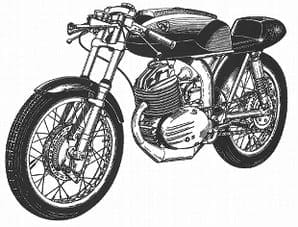 By the early 1960s the Villiers engine no longer suffered from the image of being little more than a power unit best suited for use in lawnmowers. All that had changed in 1950 when Jack Botting put up the best class performance in the 1950 British Experts Trial. Although too much significance could not be attached to this at the time, it heralded the early beginnings of the two stroke asserting its competitiveness in sporting events of all kinds, be it trials, scrambles, or much later, in road racing. DOT was one of several manufacturers who saw such a bright future in scrambles that at the end of the 1953 season they decided to put all their eggs in one basket and henceforth market only competition models. The results that followed more than justified their decision, Villiers having responded to the challenge with their new 197cc 8E engine unit that had the option of a four speed gearbox. Although the lubrication of this new generation of engines depended on a petrol/oil mix like their forebears, even this had been made easier by the introduction of self mixing oils. No longer just a cheap and convenient means of travelling to and from work, or as an 'entry level' machine for the learner rider, the once humble two stroke had at last begun to show its teeth.

Already, a number of new two stroke manufacturers had entered the market in the early post war years, amongst them Ambassador, Bown, DMW, Greeves, HJH and Tandon. Initially, it was their intention to establish themselves by making machines suitable only for general road use. However, once they had gained a foothold in the rapidly growing market for lightweights, some could see prospects in producing a limited number of competition models. DMW and Greeves in particular soon found this could prove a profitable venture and if their machines achieved good results in open competition, it could even enhance their reputation. All relied heavily on the Villiers engine as their motive power, and soon Villiers found themselves making special competition engines such as their 246cc 32A and its later successors.

In early 1963 another new manufacturer announced their intention to begin making a trials two stroke based on a 197cc 9E Villiers engine unit, with the option of Villiers 246cc 32A engine, if required. The news came from Scorpion Motor Cycles Limited, of Silverstone Works, Ashburnham Road, Northampton. They also intended making this model in kit form, a familiar ploy at that time to circumvent having to pay purchase tax on the retail price. The machine's layout was similar to that of most of its contemporaries, apart from the fact that the main frame was made from box section tubing like that at one time used by DMW. At the front end, an Armstrong leading link fork added a touch of style, enhanced by wheels having full width hubs and 6" diameter brakes. Fibreglass mudguards and a petrol tank made from the same material helped reduce the overall weight to around the 200lb mark, the rear mudguard being an integral part of the seat pan and the rear number plate.

No sooner had the trials model been announced than plans were laid for a scrambles model built along somewhat similar lines. This machine, designated the Scrambles MX4, would be powered by a 246cc 36A Villiers engine which could be specified with one or other of the two popular conversions of the day, a Marcelle or a Parkinson, to boost performance still further.

Villiers Starmaker engine
The continual development of Villiers' Starmaker engine opened up yet another avenue to be explored – that of road racing. Now in its new guise with close pitch cylinder fins, the engine was capable of producing 31.2bhp at 7,500rpm, which meant speeds in excess of 120mph were possible. Greeves had already shown that their 246cc RAS Silverstone model provided a good entry level machine for aspiring road racers, so Scorpion decided to follow suit with their own road racer, using the 247cc Starmaker engine and an Albion five speed gearbox fitted to an entirely new chassis.

Designated racer 250 GP5, the new model employed a tubular spine frame from which the engine unit was suspended. Of massive dimensions, the main tube was bent to perform the dual function of the usual top and seat tubes, a light welded-on sub frame supporting the rear of the petrol tank and the seat. It also carried the engine oil. The swinging arm rear suspension pivoted at the base of the large diameter tube and had its movement controlled by Girling units. Snail cams were used for the rear wheel adjusters, the wheels having Oldani hubs and brakes. Wheel sizes were 18" diameter, front and rear, with alloy rims. 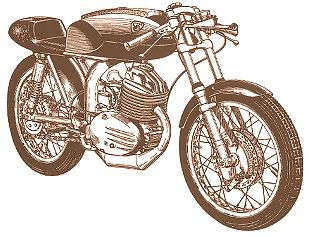 At the front end, a Ceriani front fork of conventional telescopic design provided 4" of movement. It had an alloy crown, yoke and sliders. The fuel tank was made of fibreglass and held one and a half gallons of fuel. For the ignition system there was a choice of a 6 volt coil or a Wipac flywheel magneto. Other equipment included a 10,000rpm Smiths tachometer mounted in a vibration proof rubber diaphragm and the essential resonant exhaust system for boosting the engine's performance. As may be expected, the engine was fitted with a large bore Amal GP5 carburettor and remote float chamber. Also included in the specification was a fibreglass racing fairing with a shaped Perspex screen, having special engine cooling ducts incorporated in its bodywork. Accessories included tools, battery, and a Wipac battery charging unit. The frame was finished in desert yellow, offset by black fibreglass mudguards, the tank being lined in desert yellow to match. The overall weight of the Racer was a very creditable 1891bs.

Test run before despatch
Included in the list price of £414.18s. was a free service after the first race, all engines having been test run before despatch. Optional extras included a large capacity Manx type fuel tank, a range of jets for the carburettor and a number of different sized sprockets.

Sadly, the Scorpion in its many guises had only a very short life and in little more than two years it had vanished from the scene completely. No record exists of how 'many of the trials and scrambles models were sold, but of the Racer 250GP5 it would seem that only a prototype was made. This was displayed on Scorpion's stand at the 1964 Earls Court Motor Cycle Show.

Did Scorpion pay the price of overstretching themselves by making too many different models too soon or was it that Villiers were unable to supply the engines they required, as has been suggested in some quarters? Whatever the answer, it would be interesting to know how many Scorpions have survived in their original specification.