Rudge was another of the better known names in the British motorcycle industry. Although the company had started in Wolverhampton during 1868, when Dan Rudge began making velocipedes, it was not until 1911 that the first motorcycle to bear this name left the production line.

By then the company had re-located itself in Coventry, with the Pugh family in control. Their first model featured their own 499cc engine, which was of the inletover exhaust valve type. It made its impact right from the start by becoming the first 500cc motorcycle to lap Brooklands at over 60mph.

Despite its initial successes, it soon became apparent that the machine's chances of continuing successes were handicapped by the direct belt drive to the rear wheel, even though a Phillips adjustable pulley or proprietary variable gears could be specified as an optional extra. This set John Pugh thinking, with the end result that he devised the famous Rudge Multi gear. Although it resembled the Zenith Gradua gear in some respects, Pugh's design differed in having the engine pulley close up as the rear wheel pulley opened out. 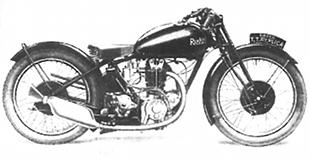 It was operated by a long gear lever on the left hand side of the machine which moved within a quadrant containing 20 notches, each representing a different gear ratio. Its addition to a single gear model cost an extra £5, but it was well worth the extra expenditure on account of the added flexibility it provided. Such was its success that it continued in manufacture until 1923, the pay-off being Cyril Pullin's victory in the 1914 Senior TT on a factory-entered machine thus equipped.

Other memorable innovations around this time included the Senspray carburettor, working on the same principle as a lady's scent spray, an enlarged 750cc engine for sidecar enthusiasts, and a 998cc vee twin (the Multwin), the production of which had been delayed by the 1914-18 war.

A year later, in 1920, came a three speed countershaft gearbox at first fitted to the twin and in 1921, a 499cc single with all-chain drive.

Inlet over exhaust
It was now only too apparent that attention was needed to the engine itself, the inlet over exhaust arrangement of the valves no longer being in fashion. The answer was provided not only swiftly but quite dramatically too. Enter the 350cc Rudge Four, the company's first single cylinder engine of this capacity featuring not only a four speed gearbox but also a four valve cylinder head.

A 500cc model built along similar lines soon followed. Yet again the company had come up with the right answer at the right time. Such was the success of these new models that production increased by 100% over the year previous, in 1924.

Rudge now had every incentive to revitalise their interest in racing, following the appointment of George Hack as their Racing Manager. By 1927 they were ready for an all-out assault on the major competition events, such as the Isle of Man TT. Using saddle tanks for the first time, 8" diameter coupled brakes, and new cylinder heads with splayed exhaust ports, the push rod singles were capable of over 100mph on alcohol fuel. 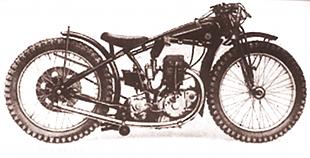 The first breakthrough came during the 1928 Ulster Grand Prix, in which the Senior Race was won by Graham Walker at just over 80mph. Not only did it give the Ulster Grand Prix the opportunity to call itself the World's Fastest Road Race, but also provided a ready made name for the four valve 500cc machine on which this victory was achieved – the Rudge Ulster.

Graham repeated his success in this race the year following, whilst other Rudge riders had similarly good results in some of the Continental Grand Prix.

George Hack decided the parallel arrangement of the valves in the cylinder head was not necessarily the best that could be achieved within a pent roof combustion chamber, even if it proved convenient. A radial configuration seemed to offer even better prospects, so a system comprising a chain of rockers across the top of the cylinder head was devised, operated by the two push rods. It resulted in a dramatic win in the 1930 TT with a first and a second place in the Senior Race, and a 1-2-3 in the Junior.

Senior TT
Although 1930 proved to be the last year in which the Senior TT would be won by a push rod engine, there can be little doubt that the company's racing successes were reflected in the quality of their standard road-going production models. They too enjoyed many innovations that put them ahead of their competitors, such as a hand-operated centre stand and a polished alloy primary chaincase, but the recession had hit the company hard such that they found themselves heading for bankruptcy. In March 1933 the inevitable happened, and an Official Receiver was appointed. If that were not enough, John Pugh, the driving force behind the company, died in 1936. 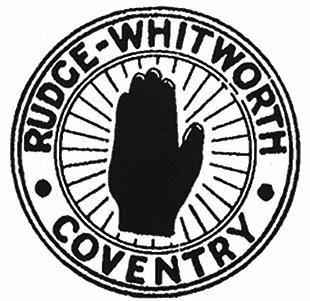 All was not lost, however. The Gramophone Company Ltd. (makers of His Master's Voice records) took over and production continued, along with some further development work. Although much lost business was regained, it never came back to its original level, so with unused factory space, motorcycle manufacture was transferred to HMV's premises at Hayes, in Middlesex in 1938.

With new design projects under way that included an overhead camshaft model and a 250cc machine for the armed forces the future seemed assured, that is until World War 2 changed the entire picture.

The Hayes factory was required for the manufacture of radar equipment, bringing the Rudge dynasty to a premature end. The loss was mourned by many, but if nothing else what the company had managed to achieve in just 29 years of making motorcycles is little short of remarkable. Rudge had certainly left its mark.