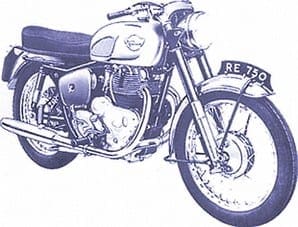 It was with their 1963 UK model range, that Royal Enfield included the biggest big parallel twin, so far seen on the home market, The move was perhaps surprising, for the famous old Redditch company was already at the forefront of the Cubes battle, with their 700 Meteor and Constellation models. The Meteor had been available since 1953, the Constellation since 1958 and both easily outstripped the competition in the capaci­ty stakes. Yet more horses had however been demanded by the US market and Redditch answered the call with the Interceptor, a 750 in enthusiasts terminology; more accurately though a vertical twin of 736cc, a figure gained from its 71mm x 93mm bore and stroke.

Extreme smoothness and tremendous power the whole way through the speed range, were the claims for the Interceptor and with its 4.22 to 1 top gear, easy long legged motorway cruising was its forte. Breathing through twin 13/16" Amal Monobloc carbs, the beefy motor devel­oped 521/2 BHP, which was the kind of muscle unknown to the ordinary road rider in the early 60s. Not since the demise of the Vincent 1000 had that kind of output been available to the right wrist of anyone, short of a track racer. Remember, an expertly tuned and set up 500 Manx Norton might only just achieve 50 plus BHP. So the Interceptor, on paper at least, was a Superbike before the name was ever thought of.

Multi plate clutch
To handle that power, the makers redesigned their multi plate clutch, specified a new crankshaft cast in Nodular iron and revised their engine lubrica­tion system which was fed from a 4 pint oil container, cast integrally with the crankcase castings in the traditional Enfield manner. In addition to the normal mountings, the back end of the semi unit engine and gearbox assembly was located firmly to the frame, through a substantial light alloy casting, picking up on the rear fork pivot brackets.

Smoothing the power flow to the rear wheel, was that other time proven Enfield feature, the cush drive rear hub. Stopping over 420Ibs of muscle bike received maybe rather less attention than making it go, because the dual 6" front and single sided 7" rear drums, were nothing new, nor exceptional.

Ignition was looked after by a Lucas magneto with hand controlled advance/retard, while an RM 15 alternator on the left crankshaft end, charged a 9 amp hour battery, via a rec­tifier. The 7" headlamp was flanked by a pair of twin pilot lamps, that were to be of questionable value when on the move in town. All pretty standard stuff for the time though, including the Armstrong units that Enfield favoured at the rear of the frame, instead of the more universal Girling's; but one of Dunlop's new fangled K70 road hugging tyres appeared on the back wheel; it was of just 3.50×19 section – razor blade width to 1995 eyes!

Polychromatic Blaze
The Interceptor was finished in black for the frame, upper fork and minor cycle parts, with a choice of Polychromatic Blaze (a reddish-tangerine colour) or gold for the top of the 4¼gallon tank and the bat­tery box covers. Mudguards, tank sides and the Siamesed exhaust system was brightly chromed. Claimed top speed was 115 mph, but contemporary road tests seemed to sug­gest some 5/10 mph less, was more likely to be found by the average enthusiast.

"You're right out in front on the Motorways on this big, smooth, high-performance machine, with its breath-tak­ing power and amazing flex­ibility. 'The special sidecar version is a must for sidecar enthusiasts."

Price with tax, at its launch, was £310.0.0 and a long list of extras included some items that really should have been all-on; extras like pillion rests, propstand and stoplight. All year round riders could opt for the full 'Airflow' fairing and matching front glassfibre guard for £30; designed with help from the Bristol Aeroplane Company, the 'Airflow' gave near 100% weather protection, increased overall perfor­mance and up to 20% improvement in petrol consumption.

The Interceptor then, blazed the way for other 750 twins to come from Britain's major producers and it also proved to be sufficiently long lasting to see out the Royal Enfield company themselves. The Enfield Cycle Company Ltd failed in 1967 and became a part of Norton-Villiers, only the Interceptor survived the upheaval, carrying on into 1968 in small numbers.

For 69 a new Series II design was evolved, showing changes in engine, electrical and cycle parts, over this first big one.