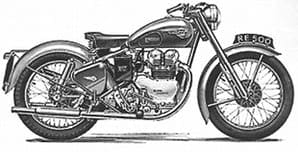 When civilian motorcycle production resumed after World War 2, manufacturers knew that if they were to make any impression on the market they would need to take into account new trends.

A telescopic front fork was an absolute must, and if there was not already a vertical twin in their range, one needed to be added. Furthermore, there was a tendency towards spring frames, provided they did not add too much to the purchase price. Royal Enfield had evidently given much thought to the problem. When the first post-war Motor Cycle Show opened in 1948, they displayed their new 496cc RE500 vertical twin, with a telescopic front fork and pivoted fork rear suspension. 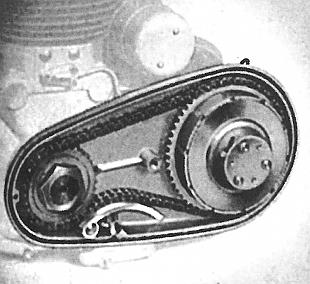 Finished in silver grey, with a chrome-plated tank that had a silver panelled top and side panels bearing the manufacturer's name in red, it was an attractive, cobby-looking machine. With the accent at that time on exports, the chances of being able to buy one on the home market were very slim indeed. A year or two would pass before the RE500 began to appear on our roads, and even then only in small numbers.

Based on the running gear of the single cylinder Bullet model, which remained the more popular model, the twin's engine had a number of good points about it which made it worthy of better reception. Indeed, the RE500 probably ranks as the most underrated early post-war model.

The engine appeared to be of unit-construction, but this was only an illusion. The Albion gearbox was a separate unit bolted to the rear of the crankcase assembly. The engine followed Royal Enfield practice in having plain bearing big ends, which ran on a one-piece crankshaft with a heavy centre flywheel. The connecting rods were alloy, running direct on the crankpins, with detachable end caps. The gudgeon pins ran directly in the small ends. The cylinder barrels were in cast iron, separate and interchangeable, with an upper spigot to locate the alloy cylinder heads. 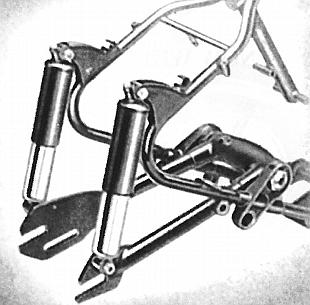 Lubrication was dependent on Royal Enfield's reciprocating oil pump, which provided two separate feeds, one to the crankshaft and one to the rockers. Royal Enfield practice was also followed by having the oil contained in a separate sump in the crankcase, with a long necked filler to the rear of the timing cover.

Other vertical twins
The arrangement of the timing gear differed from that of other vertical twins by using a long, continuous chain, to link the sprockets together, with an adjustable tensioner. The camshafts were located near the mouth of the crankcase, one in the front of, and the other behind, the cylinder barrels. Ignition was by coil, a dynamo behind the cylinders having a special skew drive for the vertical distributor. Above the dynamo was an Amal 276 carburettor with a branch manifold.

The RE500 continued with few changes in the years that followed, incorporating mainly any modifications made to the single cylinder Bullet, whose running gear it used. Most noticeable was the loss of the 'parrot's beak' front mudguard, to be replaced by one of the more conventional type, an external oil feed to the rockers, and relocating the ammeter and light switch in a cast light alloy facia on the front fork head. The ignition switch still remained below the saddle however, in the nearside toolbox. 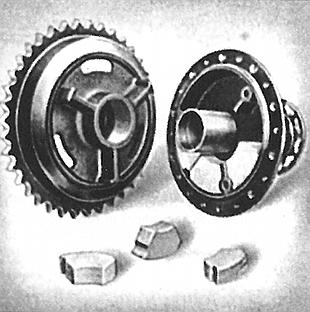 The familiar Royal Enfield casquette replaced the alloy facia in 1954, when purchasers had the option of coil ignition or a Lucas Magdyno. The Magdyno became a standard fitting in 1955, only to be superseded by a crankshaft-mounted alternator in 1957, and a reversion to coil ignition!

Criticism of the brakes led to the adoption of a dual front brake in 1955, to be followed by the option of a quickly-detachable rear wheel. Full-width hubs, dictated more by current fashion than improved braking performance, followed in 1.956. Early in 1958 the Meteor Minor appeared, bringing to a close the RE500's production run of almost ten years.

It may be of interest to note that when the Indian Motocycle Company got into difficulties in the fifties, and production ceased, the RE500 twin was imported to the USA as the Indian Tomahawk. It differed in having high rise handlebars, the Indian name on its petrol tank in gold script, and an Indian warrior's head pilot light mounted on the front mudguard.

A road test carried out by one of the motorcycling weeklies in early 1951 was complimentary. A maximum speed of 86mph was obtained, and at an average speed of 30mph, fuel consumption was 88mpg. It fell to 64mpg at 50mph. The engine was lively and free from vibration, and capable of sustaining a 65mpg cruising speed with ease.

The gearbox matched up to expectations, as did the handling and road holding. Only the brakes and lighting formed the basis of criticism, the former needing firm application and not being very responsive. It was a criticism that continued to be voiced when later models were tested.

Inevitably, the location of the switchgear and ammeter on the early models gave rise to comment, although Ixion of The Motor Cycle appeared to be in its favour. However, this was a problem soon resolved.

Why was the RE500 not popular enough to sell in large numbers, even though it looked very attractive and had both good performance and road holding? This is a difficult question to answer. Without any doubt, the appearance of the front mudguard and the location of the switchgear and ammeter on the earlier models met with disapproval from some. It was about £10 more expensive then the equivalent Triumph and Ariel twins, but on the other hand, less expensive than those from AMC.

A possible reason may be the use of coil ignition, which many motorcyclists viewed with suspicion at that time. Yet none of these seem to be really valid reasons, so no firm conclusions can be reached.

Its larger capacity descendents, the Constellation and the Interceptor, were much more popular and sold well, many years later.