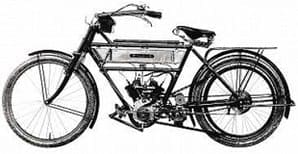 When the production of motorcycles for the civilian market resumed after the war, most manufacturers concentrated on the larger capacity classes and were less inclined to make a 250. Admittedly there was an abundance of two strokes available in the lower capacity classes but for those who preferred a four stroke the situation was bleak. AJS, Excelsior, Matchless, Sunbeam, Triumph and Velocette no longer included a 250 in their range, whilst Excelsior had ceased making four strokes. Worse still, Coventry Eagle, New Imperial and Rudge did not resume production at all. Only BSA and Panther had something to offer, apart from the infamous Brockhouse-made Indian.

Before the war a 250cc motorcycle represented the entry level for many who bought a motorcycle as a convenient means of getting to and from work, for pleasure, or often a combination of both. So why is it that this important sector of the market had been ignored? The answer is simple – Britain needed to export all it could to pay off the massive debts incurred by the war. British made motorcycles were heavily in demand, and as the accent was always on the larger capacity models, it was to these that priority was given by the major manufacturers – at the exclusion of all else. 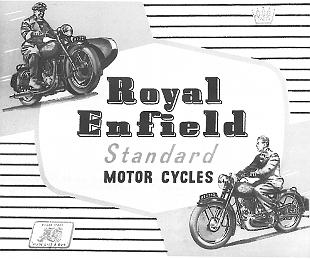 At the 1953 Earls Court Show, Royal Enfield decided it was time they re-entered the 250cc market, although the 248cc model S they had to offer was anything but inspiring. It was little more than a reincarnation of the similar capacity model they had available before the war. Surprisingly, although the spring frame was now very much in fashion, the new model S retained the rigid frame of the original model and relied on a telescopic front fork as its sole contribution to improved comfort.

The main advantage of the model S seemed to be its all-in price of £138, yet it was £3 more expensive than BSAs C11, also a pre war design, which now had the added advantage of alternator electrics. It failed to impress and by October 1954 it had been dropped from production, to be replaced by the more up-to-date 248cc Clipper model. Its replacement had not only pivoted fork rear suspension but also Enfield's stylish Casquette across the top of the telescopic front fork that enclosed the headlamp and housed the lighting switch and ammeter. At a price, of course, as the Clipper cost £162, inclusive of tax. It was heavy too, at 336Ib.

Newer 248cc model
The Clipper continued in production until February 1958, by which time it had been joined by a newer 248cc model, the Crusader. Even then, it failed to disappear completely. From March 1958 the Mark 2 Clipper was listed, differing from its predecessor in having a unit construction engine of 70 x 64.5mm, similar in design to that of the Crusader. There was now also a Clipper Airflow model, basically the Mark 2 supplied with a fibreglass fairing. These modifications were sufficient to give the Clipper a new lease of life for several more years.

The 248cc Crusader had made its debut during September 1956, to become the centre of attraction at that year's Earls Court Show. Built along unit-construction lines, the engine unit was unique in a number of respects, the most obvious being the location of the sparking plug on its right-hand side. The short stroke engine (70 x 64.5mm) had its push rod tunnel on the left, integral with the cast iron cylinder and its head, the camshaft and the timing gear also being on this side. The electrics were, supplied by an alternator, mounted on the right. Five long studs retained the cylinder and cylinder head to the all-alloy crankcase assembly, and it was claimed the engine and gearbox could be dismantled whilst still in the frame unless work was needed on the crankshaft or the connecting rod.

Geoff Duke says: "This is a really super version of the Continental which will delight the young enthusiast with its sporty looks and traditional 'Continental' perfomance."

Other eye-catching features were the use of full width light alloy wheel hubs, complete enclosure of the final drive chain, and 3.25 x 17" diameter wheels. With a retail price of £198.8s inclusive of tax and an overall weight of 3121b, the Crusader was every young motorcyclist's dream. Royal Enfield had at last got it right and were soon to reap the reward when continuing development brought forth all manner of promising variants.

In September 1958 the Crusader Sports model was introduced, having a higher compression engine, an alloy cylinder head and cams with a more sporting profile, to give a genuine top speed of 80mph. Already, the standard Crusader had been available with a fibreglass fairing like its Clipper counterpart, a variant catalogued as the Crusader Airflow.

Crusader Sports model
In good time for the 1961 Earls Court Show the Crusader 5 was announced, similar to the Crusader Sports model but having the additional benefits of an even higher compression engine, a five speed gearbox and a leading link front fork. At the same time a Crusader Trials model was unveiled, having a wide ratio four speed gearbox, coil ignition and a smaller 2½ gallon petrol tank. It was supplied without any lighting equipment. Just when it was beginning to look as though the Crusader 5 was likely to prove the ultimate in the 250cc range, along came the Continental, a five speed sports model with a 'jelly mould' tank, dropped handlebars, a tachometer and a small Perspex flyscreen. It had a performance to match.

The ultimate was not far off, however. Introduced in November 1964, the Continental GT model really set the pace, undoubtedly the most attractive of all the Royal Enfield 250s made to date. The combination of an engine with a 9.5:1 compression ration and a five speed gearbox did the trick, accentuated by the flamboyant fibreglass petrol tank and mudguards and the drilled alloy discs around each side of the front wheel hub. With a maximum speed of 86mph and capable of 76mpg when ridden under normal 'give and take' conditions, it was the epitome of the cafe racer, albeit with a price tag of £270. It mattered little that it was noisy, prone to gearbox problems and inclined to leak oil unless carefully assembled. There was nothing quite like it and every youngster dreamed of owning one.

Sadly, everything came to an end early in 1957, when the company went under as the result of unresolvable financial problems. Although subsequently acquired by Norton Villiers, the single cylinder range was not resurrected. What had once looked so promising had come to a premature end.