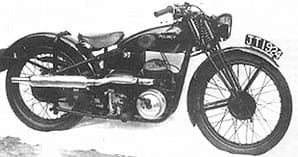 If it not been for Jack Pouncy's enterprise in Dorset, the only connection the county would have had with motorcycles was when AJW assembled mopeds with engines of foreign manufacture in Wimborne after World War 2.

His first job was with the Farmers Union, for which he used a bicycle to visit the more outlying farms to collect subscriptions, deal with insurance and enrol new members. Often he had to sleep rough overnight and became accustomed to carrying a canvas sleeping bag on the carrier for that purpose. His modest salary and the commission he earned soon accumulated sufficiently for him to buy his first motorcycle, a 147cc Francis Barnett with a 'clock spring' front fork. It marked the beginning of an all consuming interest in two strokes and led to the purchase of an even more interesting machine, a 499cc Dunelt with an engine that featured a double diameter piston to provide a mild form of supercharge. This resulted in a remarkable amount of low speed torque which, together with its outside flywheel, made a Dunelt an ideal sidecar machine.

The Dunelt provided Jack with an introduction to off road motorcycle sport when he joined the Wareham and Purbeck MCC. Another Dunelt followed, this time a 249cc model K sports with a similar piston arrangement. It too was attached to a sidecar and was entered in the 1926 Exeter Trial organised by the Motor Cycling Club, Britain's oldest. Sadly, the chance of an almost certain Gold Medal was lost through the mis-reading of an observed section sign. 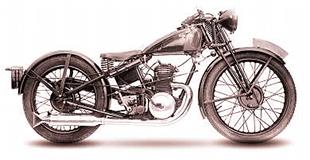 At the end of 1930 Jack had to face up to a hard decision. Dunelt had decided to cease manufacture of their range of two strokes and to replace them by models fitted with a four stroke Sturmey Archer engine made by Raleigh. Forced to look elsewhere if he was to uphold his faith in two strokes, there seemed little available to meet his exacting requirements. Some lightweights had a wheelbase that was too long, or were just too small in size, whilst others had frames which bolted together.

There was only one answer — to design and make his own machine embodying some of the lessons he had learnt through first hand practical experience. He wrote to Cliff Lewis to seek his opinion as Cliff had been one of the team who had ridden with him at Brooklands. In 1927 they had been part of a team of three who made an attempt on some long distance records in the 175cc class with a Baker two stroke. Cliff's reply was in the affirmative, suggesting he should make three as others may wish to have one. The choice of engine was easy, as the only two stroke Jack really liked was a Villiers. He also chose an Albion gearbox and a Brampton girder front fork. As many of the remaining parts as possible Jack intended to make himself, working in his army but workshop at his garage in Owermoigne, near Dorchester. Initially, the intention had been to use a larger than usual front down tube but the extra expense precluded this as the frame lugs would have to be made specially.

Instead, standard lugs were used in conjunction with a conventional size tube. After drilling and pinning the lugs to the frame, the assembly was taken to Weymouth for brazing by a skilled welder and brazier. The frames were then carefully checked for alignment and not accepted unless they lined up exactly, before they were sprayed black. Although the first petrol tanks were not particularly attractive they were made from steel and fitted with a quick action filler cap. They too were also finished in black, The bought-in components, excluding those mentioned earlier, included the exhaust pipes and silencers and wheels complete with hubs and brakes.

Open competition
A believer in testing his own machines in open competition he entered the first three Pouncy's in the 1930 Exeter Trial. Although the three 346cc Villiers engines arrived on schedule, there was a delay in frame making so one frame had to be used to run-in all three. Despite working all round the clock for three days only two machines had been on the road before the trial. Somehow, all three got to the start, albeit at the expense of Jack having four nights without sleep. Despite various teething problems all won a silver medal — after which Jack returned home to collapse completely. Later, a second 346cc model, the Triple S, was added to the range, in effect a specially tuned version of Jack's own competition mount, and then a third, the 148cc Kid.

By March 1931 production of the standard 346cc Cob was running at two a week. Priced at 37 guineas (approximately £39) it weighed 2191bs, its specification including electric lighting supplied by lighting coils contained within the Villiers flywheel magneto. To display his model range at the annual Olympia Motor Cycle Show was out of the question due to the expense — even BSA didn't have a stand there in 1931 due to the recession. Instead, a lock up was rented opposite Olympia to serve the same purpose. For the 1933 programme all three models were given different names, a 148cc Pup, a 249cc Pal and a 346cc Mate that was to replace the Triple S. All had Villiers engines with petroil lubrication, the two larger capacity models having a four speed Albion gearbox with positive stop foot change. Soon the expanding business had to be transferred to Christchurch and finally to St Johns Hill in Wareham.

Fully run-in engine
One unusual but very welcome feature the Pouncy range could boast was the availability of a fully run-in engine for an extra 25 shillings (£1.25). Aware of the need to run-in an engine with great care if it was to give of its best, Jack was an advocate of mixing colloidal graphite running-in compound with the oil. All engines were run-in at progressively higher speeds until ultimately they had covered a distance of 100 miles. During this period the cylinder barrel would be lifted and all the high spots removed from the piston before further miles were covered at still higher speeds and the procedure repeated. This continued until the engine could be run flat out. If required, an engine could also be specially tuned for the same payment and given an even more rigorous running-in session. This offered a decided advantage to competition riders who would not necessarily have the time (or patience!) to run-in an engine correctly.

The range had been reduced to a single model by early 1935, the 249cc Pal now equipped with plunger rear suspension and having a Villiers XV11A flat top piston engine. The Duplex tube frame was made by OEC, similar to that used for their own 250cc model. They supplied it complete with wheels, a Druid front fork, mudguard, handlebars, and petrol tank. Finished in black, relieved only by the chromium plating of the exhaust system, it was priced at £45.3s. The engine had distinctive rear facing exhausts that discharged into a large cast aluminium alloy expansion chamber mounted immediately above the gearbox and thence into absorption silencers of Burgess manufacture, one on each side. It was commendably quiet running yet suffered no loss of performance. Sadly, it proved to be the last model to carry the Pouncy name and it is understood only three were made.

One mystery remains. As far as is known, not a single Pouncy still exists, despite a total production of about 150. Perhaps someone, somewhere, knows where one may still be found?