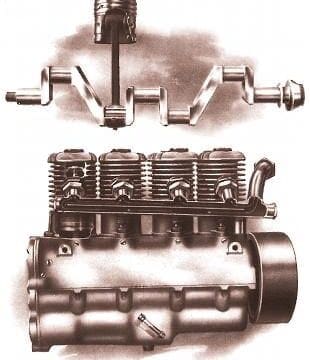 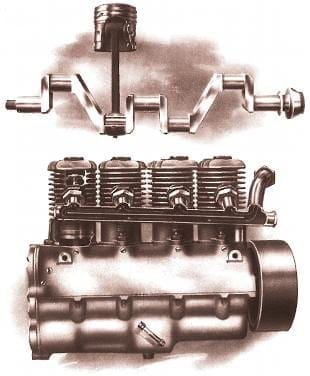 The story goes Percy Pierce, the son of the owner of the Pierce Great Arrow Motor Company in Buffalo, was visiting Europe in 1908 and was so impressed by the FN four that he brought one back with him. His father George had been looking for something to take up some unoccupied space at his Buffalo plant, so when Percy arrived back with the FN what better than to add a motorcycle to the Pierce manufacturing range? The Pierce Cycle Company was also owned by George Pierce, so he handed this part of the business to his son for a machine to be designed and manufactured along similar lines.

Not unexpectedly, what emerged in 1909 was a machine with an in-line four cylinder engine similar in many respects to that of the FN. It differed in having a capacity of 600cc though, and cylinders with an integral cylinder head of the 'T' type, in which the side inlet and exhaust valves were mechanically operated. It too lacked a clutch, but as it had pedalling gear the machine could be started by this means whilst on its rear stand. If the rider preferred not to stop the engine before pushing it off its stand and doing a run and bump start, he could rock it off the stand and proceed on his way, albeit it somewhat violently!

Where the Pierce differed significantly from its FN counterpart was in the design of the frame, a feature that was immediately obvious. Instead of using conventional frame tubes, greatly enlarged tubes of 3.5" diameter were substituted, so that the petrol could be carried in the top frame tube, and the oil in the front down tube. Furthermore, the massive crankcase assembly served also as the lower part of the frame. To name the machine Pierce seemed inadequate, so Percy borrowed the Arrow part of the name from his father's company. Now the top tube containing the petrol could have Pierce in bold red letters outlined in gold, with a long golden arrow running horizontally through them. The effect was enhanced by enamelling the frame and cycle parts in black, offset tastefully by the white wall tyres. Optional finishes were available in Carmine Red or Pierce Royal Red.

Two-speed gear
In 1910 a multi-disc clutch and a two-speed gear were added at the base of the saddle down tube, operated jointly by a long lever on the right hand side of the machine, just in front of the rider. Amongst a range of accessories were a tandem attachment for a pillion rider ($18), a luggage carrier ($7.50), a speedometer ($20), an acetylene headlamp ($5 plus an extra $5 for the gas generator) or a Prest-O-Lite compressed gas cylinder that eliminated the need for a separate gas generator ($10).

Although the Pierce Arrow Four sold well alongside the company's cheaper 592cc belt drive single cylinder models, even highly priced at $325 they were selling at a loss. When the price was raised to $400, the four cylinder model was still not breaking even, especially after some further modifications that included a more robust front fork and a spring loaded saddle pillar.

During 1913 production came to a close when the Pierce Cycle Company went into liquidation. Analysts later discovered that no matter what further production economies could have been made, the very design of the Four and its method of manufacture would never have allowed it to be sold at a competitive price.

The car company lingered on after diversifying into commercial vehicles, many of their trucks giving exemplary service in the 1914-18 war, when they were known as the Fierce Sparrow. That company too finally disappeared in the mid 1930s when they were absorbed by Studebaker.

A Pierce Arrow Four has been seen in some of the post war Pioneer Runs, one of part of a collection owned by the late Rex Judd. In the 50s, a single cylinder model was found in Suffolk in a somewhat poor condition, although it was ultimately restored to its former glory. It may well have been owned originally by the company's UK representative who was known to have lived close to Woodbridge.

Needless to say, a Pierce Arrow motorcycle of any kind is now a rare sight in this country, as may well the case in the USA too.