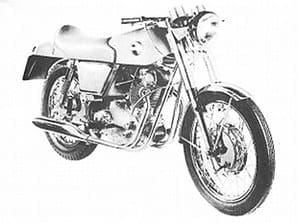 Norton Motors was one of the earliest casualties of the crumbling British motor cycle industry when, in early 1953, they encountered serious financial problems and were acquired by Associated Motor Cycles Ltd. That in itself was bad news for all Norton enthusiasts, but worse was yet to come. Although initially Norton managed to retain much of its Original identity after the merger, in 1962 the decision was made to close the famous Bracebridge Street works in Birmingham, and transfer all Norton production to London, at the Matchless premises in Plumstead. Already the Norton range had been showing ever increasing signs of Matchless influence, but from this point on, the production of a number of odd-looking Norton/Matchless hybrids began to emerge. It soon became difficult to tell whether they were of Norton or Matchless origin!

Associated Motor Cycles
Just four years later, Associated Motor Cycles found themselves in such serious financial trouble that the Official Receiver had to be called in. Yet another take-over resulted, this time by Manganese Bronze Group, under the chairmanship of Dennis Poore. Even the government at that time had become alarmed about the impending demise of the motorcycle industry which, at one time, had been a big export earner. They tended to see Dennis Poore as its saviour and encouraged the merger. The outcome was the formation in 1966 of Norton Villiers Limited, operating as part of the Norton Matchless Division from premises at 44 High Street, Plumstead, London SE18.

The first move was to dispose of all the Norton and AMC race shop equipment and then to clear all existing stocks of the models in the Norton range. Plans had been laid for the design and manufacture of an entirely new model, beginning with the appointment on 1st January 1967 of Dr. Stefan Bauer from Rolls-Royce. He would head the project team, which included two motorcycle development engineers, Bernard Hooper and Bob Trigg. 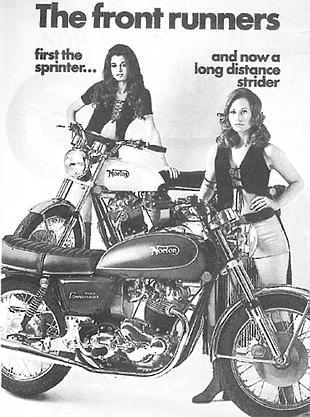 Looking at the old range, the machine with the most potential seemed to be the 750cc Atlas twin, even though it was handicapped by an engine vibration problem that tended to restrict its high performance capabilities. Large capacity twins were much in demand in North America, as indeed they were here. If it were possible to damp out the vibration in some way, the Atlas engine could be retained as the power unit, even if it wasn't built along unit-construction lines, and used a separate four-speed gearbox of AMC manufacture.

A 'stretched' version of Hopwood's original 500cc engines of the mid-Forties, it had clearly withstood the test of time, even if the increased vibration inherent in boosting its capacity had been inevitable.

Any attempt to reduce the engine vibration would have resulted in its extensive redesign, which was quite out of the question. The answer, therefore, was to isolate the engine and its transmission in some way from the main frame, so that the rider no longer suffered from its effects. Thus was created the Isolastic suspension system in which the engine, gearbox and swinging rear fork were isolated from the main frame by rubber bushes. It was a brilliantly conceived idea which, when patented, earned for its inventors a prestigious award from Castrol for their engineering achievement and resulted in the birth of the 745cc Norton Commando twin.

Apart from the Isolastic suspension system, the Commando differed in many other respects from its Atlas predecessor. Gone was the famous featherbed frame, the new main frame comprising a 2¼" top tube supporting a conventional duplex tube cradle to carry the engine, gearbox and swinging rear fork pivot. The function of this massive top tube was to resist any torsional movement that otherwise would have necessitated more robust sub-assembly mountings.

Inclined forward
With its cylinders inclined forward, the engine was attached to two small lugs on the front downtubes by rubber mountings, and was bolted to engine plates at the rear through which the gearbox passed and to which it was anchored. These plates also carried the pivot bearing for the swinging rear fork, having two more rubber mounted attachment points where they joined the rear of the main frame. Although the concept was not entirely new, as rubber had been used before by other manufacturers to damp out vibration, only single components rather than complete assemblies had been isolated in this manner. The front fork was a Norton Roadholder unit, with two-way damping, and in deference to the Commando's performance, the front wheel sported a twin leading shoe ventilated brake. Girling suspension units were fitted at the rear, with three position adjustment for load.

The Commando made its first public appearance at the 1967 Earls Court Motor Cycle Show, in what was known as 'Fastback' style. Finished in silver, relieved only by an orange coloured dualseat, even the frame and cast-iron cylinder block had been given a silver finish. Norton enthus

iasts were quick to notice one very unusual feature. On the petrol tank, in the area normally occupied by the manufacturers transfer, was just a green-coloured 'blob', which represented the company's new corporate image. Needless to say, such a far-fetched notion was short-lived when the Commando went into volume production. It was retained, however, on the company's stationery.

The production models came on stream during February 1968, with a more conservative finish. The frame was now painted black and the petrol tank finished completely in green, as was the tail end of the black-covered dualseat.

The engine was in its natural colours. Many changes in specification would take place over the next ten years before production finally ceased in October 1977, these included stretching the engine yet again to 828cc.

When the Plumstead premises were closed in 1969, engine production was transferred to the old Villiers factory in Wolverhampton, with final assembly completed in new premises at Andover in Hampshire.

It had been a successful venture, the Commando being voted 'Motorcycle of the Year' for six successive years by readers of Motor Cycle News. Andover Norton estimate there are still over 50,000 Commandos in existence around the world, which underlines its popularity. Many regarded it as Britain's first Superbike.

The Norton Isolastic principle (patented) built into the Commando couples the engine and gearbox directly to the rear wheel as one unit (as illustrated) on which the frame is secured by three strategically located resilient mounts – A, B and C. This principle of construction not only insulates the rider, frame, lamps and instruments from engine vibration, thus enabling continued use of an uncomplicated high performance vertical twin engine with low maintenance costs and light weight without loss of riding comfort – the famous Commando formula – but also is unique in that, by mounting the rear swinging arm directly on the engine cradle, it ensures excellent handling characteristics by preventing twisting between the engine and rear wheel sprockets under load, a defect associated with earlier attempts by the motorcycle industry to reduce vibration by simple rubber engine mounts.