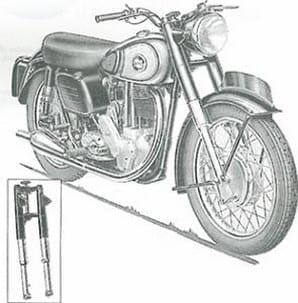 Or re-introduced one we should say, because the 350 overhead single cylinder model 50 had been in the Bracebridge Street catalogue right up to 1939, but didn't appear again until the 1956 season.

For that year, the 350 (actually 348cc from its 71 x 88mm bore x stroke), formed part of a three model single cylinder range; along with the 490cc ES2 and tile 596cc model 19S. All had a brazed lug cradle frame with swinging arm rear suspension and shared a number of new Norton features for '56.

Most noticeable were the styled oil tank and toolbox, that also tidied away the battery and the Lucas MCH 58 headlamp that incorporated a panel in its topside, housing speedometer, amme­ter and lighting switch.

It also had a pilot light inside the pre focus light unit, doing away with the unpopular under-slung lamp on the old shell. Full width alloy hubs (taken from the 1955 Dominator 88) were standard, as was the then new Amal Monobloc carb and the deep 3¼ gallon petrol tank.

The dualseat had a restyled flat top while at the ends of the swinging fork were cast lugs, to support the wheel spindle; rather than the simple flattened and slotted tube ends of earlier years.

An original 1956 model 50 will have 'D' shaped footrest rubbers, the last year that these were used by Norton. It was also the final year for the `Laydown' pattern gearbox; a change to the AMC box being made late in the season. Norton stamped all their frames and engines with year and model code letters and numbers; for 1956 the year letter was `L', the model 50 number was '13' and both engines and frames had matching serial numbers.

Easy too, to tell '56 singles from '57, because a year later the tank had screw on chrome pan­els, the headlamp had changed to a Lucas MCH61 (with the instruments located directly in the shell, not on a sub panel), there was an all tubular frame (without the cast engine cradle), revised front brake hub and plate, bigger head finning incorporating pushrod tunnels and a new tubular silencer ­the 'peardrop' had gone.