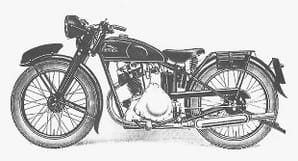 In 1931 the British motorcycle industry was facing hard times. With the country in the grip of a deep recession, a number of manufacturers had already ceased business; amongst them AJS, who had gone into voluntary liquidation early that year. Something had to be done to restore confidence, and it was on the shoulders of the then Chancellor of the Exchequer, Phillip Snowden, that this responsibility fell. Although the plight of the hard pressed motorcycle industry was only one of his many problems, he proposed a tax concession for smaller capacity machines, to take effect from 1st January 1932. From that date on, there would be an across-the-board annual Road Rax of 15/- (75p) on all motorcycles of up to 150cc capacity. Motorcycles would, henceforth, be taxed by engine capacity and not weight.

This was good news for Villiers, as manufacturers would buy-in even greater quantities of their small two-stroke engines to reap the benefit from this concession. But both New Imperial and Royal Enfield had other ideas. They were in favour of developing their own 150cc lightweights, powered by ohv four-stroke engines. New Imperial got there first and had a 146cc prototype at the 1931 Olympia Show. 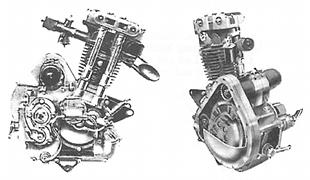 The engine unit was quite revolutionary. Built in unit with a 3-speed hand change gearbox, it was inclined forward in the frame, with the cylinder barrel and rocker box mounted transversely, so that the enclosed pushrods ran up the rear. The cylinder head was in the normal position, with the exhaust port to the front and the sparking plug in close proximity to it, also facing forwards. The primary drive was on the offside, within an alloy casing and comprised three straight-cut gear pinions, the centre one of which drove the transverse camshaft. It also served an external Pilgrim pump, to pick up oil from the engine's oil compartment, which also contained the gearbox. The gearchange lever was modelled along car lines, very long and without a gate. On the nearside a Villiers flywheel magneto supplied both ignition and lighting requirements. Strangely enough, there was no kickstarter, although it was emphasised that one would be incorporated into the production models.

A sturdy single loop, rigid frame was fitted with an undamped front fork made from pressed steel. Both wheels were of 19" diameter and shod with 2.75" section tyres. Listed at £28.7s.Od (£28.35) fully equipped, it wasn't surprising that many orders were taken at the Show. However, when the production models did appear, they had a totally different engine unit.!

Remarkably short period of time
There was good reason for this last minute change, one accomplished in a remarkably short period of time. On test, the prototype engine had proved pathetically underpowered, necessitating extensive redesign as the only way out of such an unfortunate dilemma. The end result however, was a very good engine which remained in production, virtually unchanged, almost up to the outbreak of war in 1939. 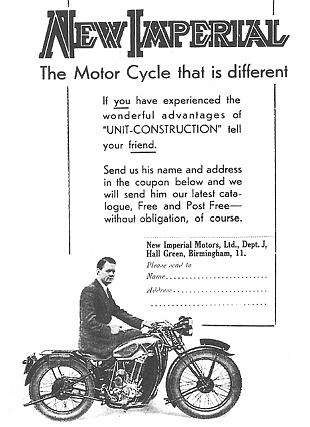 The new engine was the first of a very successful unit-construction range, on which the company would capitalise in the years that followed by increasing its capacity. Still inclined forward at an angle of 45 degrees like the 1931 prototype and slotted into the same cycle parts, but with tyres of increased, 3", section it was much more conventional in appearance; with the timing gear and pushrods on the offside. It retained a gear-driven primary, now on the nearside and housed within a triangular shaped alloy case. Only two gear pinions were used, now helically cut. As a result, the engine ran in the reverse direction. An additional pinion, in mesh with the clutch, provided drive to a dynamo, or Maglita, depending on the machine's chosen specification; these replacing the earlier design's Villiers flywheel magneto. Oil contained within a separate compartment of the engine/gearbox casting lubricated the integral gearbox internals, as before. An external Pilgrim pump, driven off the inlet camshaft, supplied oil to the engine; any excess being taken off the flywheels by a scraper and returned via the gearbox to the oil compartment. The fully enclosed valve gear was treated to oil mist lubrication.

Large diameter centre spring
Fitted with a large diameter centre spring, the clutch initially used a pair of Ferodo rings as the friction medium, but when it showed a tendency to slip, this was superseded by a pair of cork circles. Gear ratios were unfortunately not well chosen, being 8:1, 12.5:1 and 23:1! Fortunately gear changing had been made easier by reverting to a conventional gated hand change; the gate being attached to the offside of the petrol tank. Despite these minor shortcomings, the Unit Minor Model 23, as it was catalogued, provided remarkably good service. Maximum speed was about 50 mph under favourable conditions and the engine was so flexible that, with the ignition retarded, it could be ridden at less than walking speed with the clutch fully home. Thanks to the diminutive Amal carburettor, which had two fixed jets and no needle, 140 mpg was possible! Those who opted for the cheaper model, with coil ignition and a Lucas dynamo, probably had the better deal. The more expensive version came with the infamous Lucas Maglita which supplied both ignition and lights; capable of satisfying the needs of one or the other quite well, it was never too good at handling both simultaneously.

By 1935, four versions of the Model 23 were available, the Standard with coil ignition was priced at £29.15.0d, or £31.5.0d with Maglita. A larger saddle, 4-speed gearbox, front stand and tubular front fork defined the De Luxe Model 23 at £32.0.0d coil/£33.12.6d Maglita. A sports version, coded Model 25, differed only from the Standard spec in having an upswept pipe and lifting handle, but dispensed with a rear carrier, in coil ignition form only it cost £29.15.0d. Last and ultimate variation was the Model 27 De Luxe Sports, Maglita (without coil option) and with foot gearchange, it was otherwise identical to the 23DL and came at £34.12.6d.

Finished in black, the early models had a red or green coloured panel on the tank, with the New Imperial name in gold letters. Later, the tank was gold lined, with a different logo that included, in addition, the words 'King of Motors' over a stylised beast, which became known as the 'mechanical Lion'. Towards the end of production, when the company was faced with increasing financial problems, only the initials 'N.I.' were used. The cynics interpreting this as – Nearly Insolvent!

New Imperial's last appearance was at the 1938 Show. Despite having made some excellent machines and enjoyed numerous racing successes, they finally ran out of money and were acquired by Triumph. Had it not been for World War II though, the name may well have been retained and production continued, with a 200cc model of Edward Turner's own design.