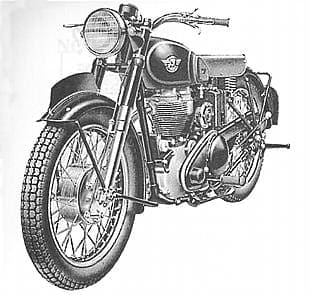 It was the only way the government could conserve this country's precious fuel supplies, which had to be shipped either from the USA or the Middle East. Motorcycling had, for the duration of the war, to become little more than a cherished memory. A great many riders were serving in the armed forces and from 1941 on, machines were made only under contract for service use.

Yet somehow, the two weekly magazines, Motor Cycling and The Motor Cycle kept going, despite a paper shortage, with flashbacks to the past, the reprinting of old road tests and even humourous stories about army life. If nothing else, they managed to sustain their readers' interest until better times came along.

It was not until May 1941 that the first memorable 'scoop' came their way, the introduction of a new military motorcycle by Matchless. Designated the Model G3/L, its most outstanding feature was the use of a telescopic front fork. The idea itself was not new, BMW had marketed two models with this type of fork in 1935 and Norton had used it on their 1938 'works' racers. Long before that, Scott had a fork that operated on the same principal. Needless to say, the Matchless fork created great interest. It gave the machine a more tidy appearance and the rider a softer ride, with its 4½" of movement.

The G3/L's ancestor was the earlier G3 model of 1935. When the army placed their first contracts with Matchless, they had been supplied with a military version of the G3, tagged G3/WO, which had a conventional girder front fork.

The War Department were, it seems, not too satisfied with it. Exactly why is not known, although it has been alleged it was considered to be too heavy for an OHV 350. Whatever the reason, the G3/L that followed was a lighter and far superior machine, with the added advantage of having a telescopic front fork. In later years it was disclosed the fork design had been based on that of the BMW.

The single exhaust port G3/L engine retained the 69mm x 93mm bore and stroke dimensions of its predecessor, but had been lightened to shed some of the excess weight that had been the subject of criticism by the War Department. Reducing the finning on the cast iron cylinder barrel and head alone had saved almost 5Ibs. It had a new single downtube rigid frame too, a further saving in weight being achieved by using light alloy fork sliders. As a result, the G3/L was some 60Ibs lighter, at around the 320Ibs mark.

Lucas dynamo
A bone of contention was the location of the Lucas dynamo, mounted directly above the gearbox and driven by chain from a sprocket on the end of the crankshaft. The bulbous profile of the gearbox prevented it from being withdrawn until the gearbox itself had been lowered, which involved dismantling the whole of the primary transmission; a considerable amount of work.

Many an army artificer must have cursed this arrangement heartily, and thought it a pity that the original intention of fitting an AC alternator, never materialised.

Graham Walker, then the Editor of Motor Cycling was one of the few privileged to test a new model, destined for despatch to the army, and his comments make interesting reading. The telescopic front fork made a marked impression on him, his only criticism being the need for a steering damper to prevent the front wheel from wandering when the machine was ridden over rough ground. The Matchless started easily, would cruise readily at 50-55 mph and maintain 60 mph for long periods, without stress. It was lively and otherwise handled well, both on and off road. Average riding on the road showed fuel consumption of around 63 mpg (on Pool petrol), and only a negligible amount of oil was used. Just one burning question remained unanswered. When would the war end, so that a civilian version could become available?

It is at this time, that an ironic note crept into the story. One magazine published a somewhat critical test of the new model, which is alleged to have offended AMC's Joint Managing Director. He took umbrage and placed an embargo on all future magazine road tests of AMC motorcycles. It was a questionable decision which, in the long run, could only have had an adverse affect on sales. It was rigorously upheld for a good many years, with the result that very little performance data was ever published on the early models.

It was in June 1945 that the impending production of a civilian version of the G3/L was announced. Virtually identical to the 1941 G3/L model, it was to be finished in black enamel, relieved by just a few chromium plated parts. It differed only from the military version in having a carburettor with larger choke size and the fitting of rubbers to footrests and gear change pedal.

Needless to say, any new model was exceedingly difficult to obtain when peacetime production re-started, not simply because most were earmarked for export, but also because nearly all dealers had a lengthy waiting list of prospective customers.

For many, especially the more impecunious, salvation lay in the purchase of an ex-WD tele fork model when army surplus stocks became available. Even so, they commanded a high price initially, as there was no shortage of purchasers for those either. Everyone now wanted a motorcycle with a telescopic front fork, and when an ex-WD G3/L was broken for spares, there was no problem in disposing of the front fork and wheel. A secondary market for tele fork conversions soon blossomed, as it was possible to adapt a Matchless telescopic to fit almost any make of machine.

Although AMC's fork (it was fitted also to the civilian AJS models) represented the first really significant change in British motorcycle design for years, it was nothing like as good as those we take for granted today. The springing was soft and the hydraulic rebound damping somewhat sketchy, such that a sudden application of the front brake or hitting a deep pothole, would initiate a pronounced dip at the front end. However, it did represent a very considerable improvement in terms of comfort over the older girder fork, with its limited movement and friction damping. Although it may not have been realised at the time, the WD G3/L Matchless was destined to become a trendsetter.