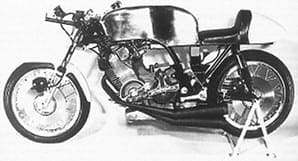 When it became obvious that there was no longer any hope of Britain having a Grand Prix racing motorcycle capable of taking up the foreign challenge, the idea of a Manx Lottery arose. In principle it seemed a good means of raising money to fund such a possibility. Whilst the primary aim would be to raise money for local hospitals, a spin-off would be used to sponsor the design and construction of a British world-beater.

Allocation of £7,000
The idea caught on and the proceeds from the first lottery held in 1965 resulted in an allocation of £7,000 towards the racing motorcycle project. With the first stage of the money raising campaign under way, the weekly motorcycle magazines invited suggestions about what form such a machine should take. All manner of designs and tenders were submitted but as Veloce Limited already had such a design available it seemed this should be the front runner to help reduce costs. Opinions vary as to whether this was Percy Goodman's original design or one which had been 'put outside' to G.H. Jones after Percy had died and the four cylinder project had been vetoed by Veloce's board. The second Manx Lottery received a less enthusiastic response but hopes were revived when Sir Alfred Owen stepped in. He now owned BRM and offered to let BRM design the engine and work in conjunction with Veloce Limited who would supply the remainder of the proposed racer. This, of course, raised another interesting point. As BRM had already originated the earlier Norton design would this now be resurrected in preference to that which Veloce Limited already had on the stocks? Nonetheless, Sir Alfred Owen's offer was well received for it was hoped it would provide the much-needed fresh impetus to the Manx Lottery campaign.

Whether or not his intervention would have been enough to revitalise the racing machine project will never be known. 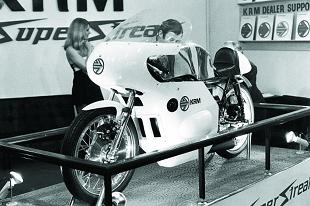 Queries had been raised about the way in which the lottery was being run. When the Manx Government decided to investigate the various allegations about its administration, albeit with good intent, their action did little more than raise serious doubts in the minds of those who had already donated. Some thought it went so far as to suggest these misgivings might have been well founded. As a result donations to the following lottery fell more steeply. The end came when the lottery committee resigned after finding themselves in conflict with the Manx Government over suggested changes in the lottery act. Lotteries for the foreseeable future were banned and the racing machine project came to a premature end.

Just when everything seemed completely lost, a surprise announcement came from an unexpected source. Steel Fabrications (Hull) Ltd formed a subsidiary, Kingston Racing Motors Ltd., of Ashby de la Zouch, to take up the challenge and produce what they regarded as a British world beater. Their aim was to construct a new 350cc four cylinder racer at a cost of approximately £10,000 with which to challenge the Japanese two stroke twins of similar capacity that currently dominated that capacity class of racing.

It was certainly a bold and very ambitious move, especially as they hoped to develop from the prototype a clubman style racer that could be produced in limited numbers for around £2,000. It seemed unlikely though that their challenge would go far enough in terms of the original concept. Yet it looked promising as the design team included Jack Williams, AMC's former Development Engineer. He had been appointed Technical Consultant, to bring with him a considerable amount of expertise. His success in uprating the performance of the 7R MS and the Matchless G50 during his involvement with AMC left no doubt about this.

The specification of the KRM certainly showed promise. The four cylinder double overhead camshaft in-line engine was arranged transversely across the frame and was alleged to produce 65bhp at 13,000rpm. Although the engine was air-cooled it had an unusual external appearance, brought about by a fibreglass jacket that fitted around and between the cylinders and head to duct the airflow to improve cooling. It was inclined forward in the frame at an angle of 32 degrees, the crankcase, cylinder block and gearbox being cast as a monobloc unit. Bore and stroke dimensions were 52x41mm and the compression ratio 12:1, with a 1-3-4-2 firing order. The crankshaft ran on six plain bearings, a patented centre coupling taking the primary drive to the six speed gearbox with Quaife internals.

Oil was contained in an underslung sump that bolted to the underside of the engine unit and held seven pints of lubricant. A heavily finned oil filter that acted also as a cooler projected forward, below the cylinder block. The pump itself, of the trochoid type, ran at a quarter engine speed and could deliver up to 32 pints of oil per minute.

Domed pistons
The cylinder head was of the two valve per cylinder type which, in conjunction with domed pistons and squish bands, provided the desired combustion characteristics. High engine speeds demanded a transistorised ignition system of the 'Luminition' type, driven off the left hand side of the exhaust camshaft. Although four 22mm Amal Concentric carburettors provided the carburation it was anticipated that at a later stage, fuel injection would be substituted. Somewhat overweight, the prototype scaled over 3001bs, although it was intended to reduce to 2901bs on the production models and lower it to a more acceptable 2701bs at a later stage.

The KRM Superstreak made its debut on schedule at the 1973 Annual Racing and Sporting Motor Cycle Show in Westminster. As may be expected it attracted a great deal of attention and was undoubtedly the highlight of the show. Many however had reservations about the possibility of a British made machine offering serious challenge to the Japanese two stroke in the face of their almost overwhelming performance. They were already strongly entrenched.

Sadly, these doubts were soon substantiated. The Superstreak vanished almost as suddenly as it had appeared; production having never got beyond the construction of the prototype. Getting on for a couple of years later the prototype was sold but where is it now, assuming it still exists, is unknown. It is alleged the project foundered at such an early stage because the development costs had escalated to the extent where the project was no longer a viable proposition.