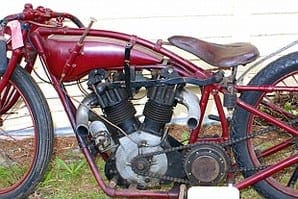 The Indian Motorcycle Company, of Springfield, Massachusetts, a formidable rival to Harley-Davidson, were just as famous for their large capacity vee-twins. The first appeared way back in 1906 and by 1911 they had made a tremendous impact here, when they dominated the 1911 Senior TT, taking the first three places. Not only did they have a countershaft gearbox, but also all-chain drive. British manufacturers sat up and started to take notice.

Indian continued to produce a number of memorable models such as the 101, the Scout and the four cylinder Ace. It will also be recalled that Indian fitted an electric self-starter, decades before the Japanese had a similar idea. It had been specified for their Hendee Special model of 1914.

Edward Turner
During the forties, Indian seemed to lose its way. Edward Turner had expressed concern about the design of their Warrior vertical twin, when he was asked for his comments after engineers had presented him with a set of drawings during a visit to the USA. By then the company had both production and financial problems. The latter eventually became terminal, after the company had been divided into separate sales and manufacturing entities.

What followed in a short space of time is both complex and difficult to understand. Suffice it to say that 1953 marked the end of manufacture of the Indian motorcycle as we know it. Somewhere along the line Brockhouse Engineering (Southport) Ltd., a British company, acquired the right to use the Indian name on motorcycles of their own design and manufacture. 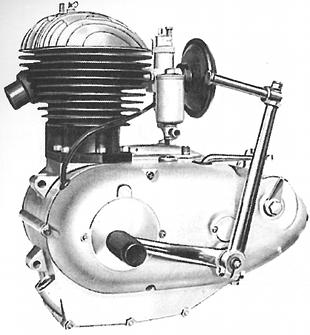 There had not been a Motorcycle Show in 1950, but when it was held again in 1951 visitors were surprised to see a motorcycle bearing the Indian name. It was on the Brockhouse Engineering stand, sharing space with their diminutive Corgis. It was, however, a far cry from anything Indian had produced before, even thought it was intended for the American market.

The new model, catalogued as the Indian Brave, was based on a single cylinder side valve engine built in-unit with a three-speed gearbox. The rigid cradle frame was fitted with an undamped telescopic front fork having rubber 'limit' buffers, both wheels being of 18 inch diameter, with 5 inch diameter brakes. A conventional saddle was fitted, with no pillion seat or rear carrier, the machine being finished in Indian Red. Ignition was by coil, a 45 watt AC alternator keeping the battery charged via a rectifier. As a concession to the intended American market, the kickstarter and gearchange lever was on the left and the rear brake pedal on the right. No retail price was quoted as the Brave was destined for export only.

Two other British manufacturers, DOT and OEC, also used the Brockhouse engine unit for a model in their own range. They were both priced at £153.6s.8d.

Low-powered
It is hardly surprising to learn attempts to market the Brave in America were unsuccessful. In a land where big is best, a low-powered 250cc side valve model was unlikely to make much impact, especially when the marque's previous customers had been weaned on beefy veetwins. Neither DOT nor OEC had much luck with their models fitted with this engine unit either.

At the 1952 show, Brockhouse stoically plodded on, still earmarking the Brave for export only. DOT and OEC continued to show their side valve-engined models too, but probably only in an attempt to dispose of stocks. Those who were unfortunate enough to have bought any motorcycle fitted with one of the Brockhouse engines would have been disappointed. Ineffective quality control created a number of problem areas, which gave the engine unit a bad name that still exists today.

By the time the 1953 Motorcycle Show had come round, Brockhouse had little option other than to make their Brave model available on the home market. Now they had two verions for sale. The rigid frame Model R was priced at £119.14s. (with saddle) or £123.18s if fitted with a dual seat and pillion footrests. The new model, the spring frame Model S, had a new frame with pivoted fork rear suspension controlled by Armstrong rear suspension units. It too could be obtained with either a saddle or a dual seat and pillion footrests, at £138.18s. and £142.2s. respectively.

An optional all-black finish was now listed and it was even suggested the Brave would be eminently suitable for hauling a light sidecar.

Highly disappointing
UK sales proved highly disappointing too, but the Indian Brave soldiered on, its two models unchanged, for two more years. Although it was displayed at the 1955 Motorcycle Show, against a wigwam and totem pole backdrop, it was announced both models would go out of production by the end of 1956, although spares would continue to be available. Even this statement was optimistic, as production of both models ceased by the time the show ended. Their passing was mourned by few. 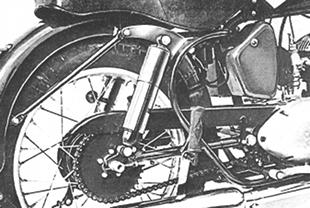 A contemporary road test of a 1953 spring frame model showed it had a maximum speed of 60 mph and fuel consumption of 102 mpg at 40 mph. The kickstarter proved awkward to use, being on the left, and the test machine jumped out of second gear whenever the revs were increased. Furthermore, top gear was not easy to select. There was a vibration period from the engine at 54 mph, but the machine would cruise comfortably at 50 mph. The lighting switch caused frequent panics though, by making intermittent contact, whilst the thief-proof steering lock was easily picked with a bent wire! Braking performance was average, until the rivets securing the rear brake torque arm sheared after 600 miles. On a bumpy road, insufficient clearance caused the exhaust system to shed its silencer! As for oil leaks, these occurred from the timing chest and the tappet cover. Bad road test reports at that time were likely to cause loss of advertising revenue and had to be soft pedalled, so readers can draw their own conclusions!

It would be interesting to know how many Indian Braves have survived, both here and in America. They are now quite rare here, although the occasional one turns up now and again, as happened at one of the Palmer Snell auctions in Shepton Mallet a few years ago. Fully restored, it created quite a bit of interest and was sold without difficulty, despite the model's dubious reputation.