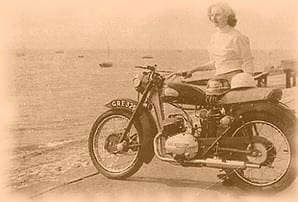 Unheard of as a motorcycle manufacturer until the early 50s, Greeves Motor valid carriages stemmed from Invacar Limited, a company that specialised in making invalid varriages for the disabled. Founded by Bert Greeves, himself a keen motorcyclist, it was whilst experimenting with rubber in torsion suspension systems for invalid carriage use that thoughts about using a similarly system for motorcycles first occurred. As a result, Bert lost little time in producing a couple of prototype models from scratch, one as a roadster and the other a scrambler.

Their existence was disclosed during May 1951, when a representative from each of the two motorcycling weeklies was invited to try them out. Powered by a 197cc single cylinder Villiers engine in each case, the two machines were quite unorthodox in appearance, especially with regard to the arrangement of their trailing link front fork. Yet though neither of them could be described as pleasing to the eye, they were certainly functional, as their riders soon found out. Never having bowed to convention, unless there was good reason, Bert preferred to go his own way and pioneer a new approach to resolve a problem. It was this that made the Greeves such a distinctive motorcycle. Apart from the novel suspension system, there soon followed the use of an alloy beam to replace the conventional down tube in a frame, which not only saved weight but was unbreakable too. Nothing had been seen like it before and it soon became accepted as the Greeves' hallmark. 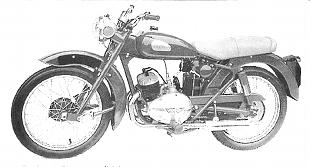 By 1953, Greeves were ready to exhibit at their first Motor Cycle Show, held at Earls Court. Five different models were shown, all of them having rubber in torsion suspension systems, front and rear, and the H section alloy beam that served as the front member of the frame. As may be expected, all had now benefited from attention to styling, which made them much more attractive. Four were powered by a single cylinder 8E Villiers engine, with a three or a four-speed gearbox. Two were roadsters and the other two a scrambler and a trials model, the latter two emphasising the company's commitment to off-road sport.

New two-stroke engine
With regard to the fifth model, a new two-stroke engine was making its debut at this Show,a twin cylinder engine/gear unit made by British Anzani. Although this company had been much involved with motorcycle engines well before the 1914-18 war, in more recent years they had become better known for their outboard marine engines. Fortunately, their present designer was also a motorcyclist at heart. By applying some of his marine engine experience, he had designed this somewhat unusual vertical twin engine with a rotary valve induction system.

Of 242cc capacity, it produced 10bhp at 4,800rpm, with exceptional acceleration. Although the method of controlling the induction was ingenious, it was also crude. The heart of the engine, which had separate crankcases split horizontally, was the built-up crankshaft assembly. Cored internally, its obliquely-slanted drillings registered with a cutaway bearing shell every revolution, to admit the petroil charge from the induction chamber, via the flywheel webs, to each cylinder alternately. Yet even if the route taken by the incoming mixture was somewhat tortuous, controlling the induction cycle in this manner proved more effective than a conventional piston and port arrangement. 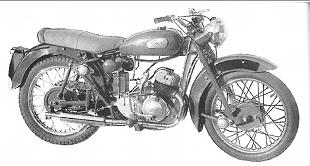 The 242cc British Anzani engine, a four-speed Albion gearbox, and the Greeves' cycle parts went together well. As a result, the fifth model in the 1954 Greeves' range was their top of the range 25D Fleetwing Sports Roadster. Anyone fortunate enough to have had a ride on one of these models cannot have failed to be impressed by its exhilarating performance as well as by its handling characteristics.

By the time the 1955 Show came around, British Anzani had gone one better by boring out the cylinders of its 242cc twin, to give an increase in capacity to 322cc. This made the previously long stroke engine (52 x 57mm) over-square (60 x 57mm), and permitted Greeves to offer a new flagship, their 32D Fleetmaster Twin.

Improved performance
The power output from the larger capacity engine had risen to 15bhp at 4,800rpm and as a gesture to its improved performance, Greeves fitted a twin 6" brake to its front wheel. Outwardly, the two twin cylinder models appeared identical apart from this addition, the overall weight of the 32D Fleetmaster having increased by only a relatively small amount, from 262 to 2761b. Although the cylinder block was of cast iron, the use of light alloy for the cylinder head had helped keep the overall weight down.

Finished in Moorland blue, the opportunity was taken to present the entire Greeves' range in this colour, the black finish used previously now being discontinued. From the restorer's point of view, however, to find an exact match for Moorland blue will prove virtually impossible. It is alleged it was never a standard colour and that variations were likely to occur according to what batch of paint was in use at the time. 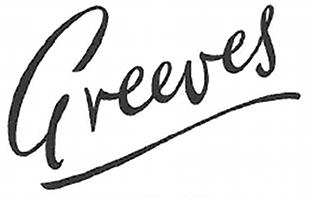 Manufacturers were always cagey about providing performance figures, but a road test of the 322cc Fleetmaster by Motor Cycling in 1955 confirmed a maximum speed of 73mph, with a speed of 72mph recorded over the flying mile. Fuel consumption was good at lower speeds as one might expect – 109mpg at 30mph and 85mpg at 40mph. But when more use was made of the machine's higher speed capabilities, it fell to 58mpg at an average speed of 50mph. Despite the twin front brake, it took 47 feet to stop from 30mph, 68 feet if the rear brake was used on its own, and 36 feet using both brakes.

The British Anzani-powered twins continued until the end of the 1957 season, after which only the small capacity Fleetwing model remained in production, now powered by a 249cc 2T Villiers twin. Although a prototype was built with a 349cc RCA twin cylinder two-stroke engine, it never went into production. The Greeves Fleetmaster had finally come to an end.

For £198 inclusive of Purchase Tax it had proved a remarkably good buy and was one of many interesting designs to come from that small factory in Church Road, Thundersley, Essex.

Although the company continued until the end of March 1979, it was brought down by the collapse of the Invacar business. A whispering campaign instigated by the motor industry, who alleged a three wheel vehicle of this type was unsafe, had successfully undermined it. Fortunately, Bert Greeves' significant contribution to the British motorcycle industry was not overlooked. On the 22nd February 1972 he was awarded the MBE at an ceremony by The Queen Mother.