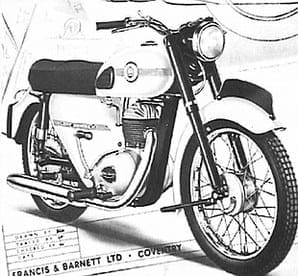 It was with their 1960 range that, for the first time in over 45 years, the Coventry-based makers of lightweight motorcycles failed to include a Villiers engined bike in their line-up. The culmination of a four year programme, which saw the Villiers Engineering Company lose a monopoly position as suppliers of two stroke power units to the British motor­cycle trade, now had Francis-Barnett's five model road range and two competition mounts powered exclusively by AMC engine/gear units. But at what price?

Francis-Barnett had been a part of the Associated Motor Cycles manufacturing group since the late 1940s and it was in the 1957 range that the first moves towards an in-house engine were to be seen, with the launch of the 249cc Cruiser 80. This took the company up into the 250 field for the first time since World War II, as during that time Villiers had had nothing bigger than the 224cc 1H engine to offer and it may have been this wish to go upmarket that initially spurred the AMC decision to build their own strokers. If so, it was a pity they didn't wait a little while longer, because at the 1956 Earls Court Show the public were able to look over the new 2T twin cylinder Villiers 250 unit and the 2H, 250 single. Either would have fitted F-Bs require­ments but, by that time AMC were in business with the 25/T and there could be no immediate turning back – not when the parent company had spent £1,000,000 on the project? You don't believe it? 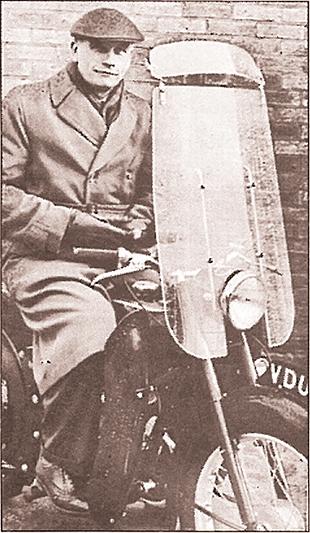 Well, that's what AMC chairman Donald Heather told the press in November 56. Half a mil­lion had gone on tooling and development, the other half invested in new buildings and equip­ment, which together could be taken as an indication of the confidence of his company in the future. Not too many years were to pass before that confidence would be shown to have been sadly misplaced, but just think about £1,000,000 in today's terms and what that huge amount must have represented in the mid 50s.

Since the spring
Still there it was, prototypes had been running since the spring of 1954 and a two year inten­sive development programme had included extensive road testing of the order of 300 miles a day. Inside the streamline outer covers lay a fairly conventional two stroke bottom end bolted to a semi unit 4 speed gear cluster, but from the crankcase mouth upwards the AMC engine was different. Instead of the then accepted Schnurle or 'Loop Scavenge' system of porting, the 25/T was to pioneer a so called 'Laminar flow' principle, which depended on keeping two transfer streams of gases closely knit and directing them up the sides of the bore to the com­bustion chamber where, on meeting, they pushed the burnt gases down towards the exhaust port. The transfer passages were open to the bore not cored into the wall, while the piston crown and cylinder head featured angled projections to assist in 'knitting' the upward flows as they entered the combustion space.

Transfer passages
Fears that the open-to-bore transfer passages could lead to rapid local wear of the piston and rings were dismissed after that extensive period of testing; but in practice, it was to be a problem that would continually rear its head. Perhaps more to the point was, that this break with con­vention didn't actually lead to any quantum leap in two stroke performance, the 25/T claimed a 13bhp output, against the 11.5 and 15 bhp of the new 2H and 2T Villiers units, respectively.

In 1958 the Cruiser 80 was joined by 199cc Falcon 87 and 171cc Light Cruiser 79 models, both having the 'Laminar flow' units and then, in 1960 the smallest Barnett, the 150 Plover lost its Villiers 30C engine, to be replaced by the AMC 15/T; this one though with conventional loop scavenge porting. The company joined in the trend towards cleaner styling, the Light Cruiser having a partial enclosure of the rear wheel before in 1959, a full job was done with the introduction of the 250 Cruiser 84, which employed glass fibre panelling encasing the whole back end of the bike coupled with steel legshields and a fullsome front guard. Twenty five years earlier Francis-Barnett had a very successful enclosed Cruiser on their hands. Villiers powered of course, an everyman bike that did sell in goodly numbers for several years. This time they weren't to be so lucky.

Good looking, clean, tidy styling in the main, with a definite quality finish exemplified the 1960 Francis-Barnett lightweights, but it was already the end of an era and in the few years left to the company, they could have sorely done with that £1,000,000 that had been so confi­dently thrown away less than a decade before.