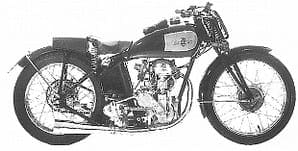 Great emphasis has always been placed on the need for care when running-in a new engine. Provided simple guidelines are followed and the machine is ridden with restraint, it will have the chance to bed-in properly before anything like full performance is used. The old rule of thumb used to be 500 miles for a four stroke and double that figure for a two stroke. Many will testify that if common sense prevailed and the loading on an engine was progressively increased, a sweet running engine with a long life expectancy was virtually assured.

Some lubricant manufacturers offered running-in compounds which, when added to the engine oil, were alleged to aid the running-in period by helping to reduce the friction between the moving parts. Most of the compounds were based on graphite as the main ingredient, foremost amongst them one made by Acheson & Company. Not unexpectedly, opinions differed about whether or not the use of a running-in compound was an actual advantage, assuming the oil was changed regularly during the running-in period as recommended by the machine's manufacturer.

Some believed the use of these compounds actually delayed the running-in period by making it more difficult to ease the rough spots wherever they occurred. Needless to say, many a lively discussion about the pros and cons resulted.

It was during 1938 that a serious discussion between an Acheson's representative and personnel at the Excelsior works resulted in the issue being put to practical test so that it could be settled once and for all.

Alan Bruce, the one-time Sidecar World Record holder who was then working for Excelsiors, was asked to produce a list of parts from which a type CXC 350cc Excelsior Manxman engine could be built. Armed with this list, a representative from one of the motorcycling magazines was appointed to observe fair play and enter the works stores to select the parts at random from which the engine was to be built. It was also agreed that unless he was present, none of the work in the main engine assembly shop was to be carried out. It was undertaken by the team normally employed on the assembly line, so that no one person would be responsible for building the engine. This conveniently ruled out any possibility of the engine being specially prepared for the test and ensured it was a perfectly standard production item.

Throughout the assembly of the test engine, the standard grade of lubricating oil had added to it Acheson's Colloidal Graphite running-in compound, in the ratio of one pint to one gallon. To prevent the possibility of any collusion here, both the oil and the running-in compound was purchased by the press representative, in sealed containers, from a retail outlet. Achesons recommended this mixing ratio for use throughout the initial running-in period, after which it could be reduced to a half pint per gallon.

The test engine was assembled within a day and on the day that followed it was run on the test bench after all its settings had been checked and a false start with a duff magneto. It was run with no load for two hours on standard pump fuel to which a small quantity of upper cylinder lubricant had been added, Petroyl, another Acheson product. After two hours running the engine was stopped and its clearances checked before it underwent a further eight hours non stop running on the following day.

'Soft' sparking plug
On the following morning the engine was warmed up for 15 minutes on a 'soft' sparking plug, then stopped so that a 'hard' racing plug could be fitted. It was then run with no load for an hour at 3,500rpm, after which the speed was increased to 4,000rpm for an hour, again with no load. At the end of the second hour the speed was increased to 4,500rpm and a load of 17Ib put on the test brake. Both the speed and the load were increased at regular hourly intervals, until a further full eight hours had elapsed. When the brake readings were correlated graphically it could be seen that a remarkably consistent power curve had been plotted and that the engine had retained its state of tune throughout the run.

At the conclusion of the run, the engine was removed from the test bench and its valve clearances checked and re-set. They had increased by only a few thousandths of an inch. The engine was then placed in a locked steel box, the key of which was held by the press representative.

When the steel box was unlocked the following morning, the engine was fitted into a test frame and the now complete machine ridden by the press representative to his home. It ran well and gave a good indication of what was to be expected from it when it was ridden on the track at Donington. He rode it to the track the following day, after filling the tank with standard pump fuel from the garage in his own village. It stayed locked in Excelsior's shed at the track overnight.

The first two hour session on the track started with HG Tyrell Smith in the saddle, one of the Excelsior works riders. The original plan was to lap consistently at around the 55mph mark, using a maximum of 6,000rpm in all the gears. However, the machine ran so well that lap speeds of just over 60mph were easily obtainable, despite a wet track. After the two hours were up 'Ginger' Woods took over, another of the company's works riders. He too lapped at approximately the same speed, despite a steadily increasing wind. By the end of the day the half distance mark of 500 miles had been covered, with the assistance of a third rider.

Before the machine was put away overnight it was checked over and no engine adjustments found necessary. An earlier slight adjustment had been needed to the clutch springs, however, before 'Ginger' Woods had taken over. Now there was need to take up slack in the chains and to fit a new rear tyre as a safety precaution, the original having worn badly.

Use full throttle
The following day the wind was blowing even harder, such that the riders found they had to use full throttle on the downhill section of the track, which gave an indicated reading of 5,700rpm. Uphill, with the wind behind them, they had to ease off to avoid exceeding the 6,000rpm limit. Despite problems with the weather, lap speeds increased to 64mph and continued at this level until the run ended. Just over 1,200 miles had been covered in total at an average speed of 60.65mph. Tyrell Smith had managed a speed of 68.02mph on his last flying lap and had maintained an average of 65.5mph during his last hour's stint. Alan Bruce, seated in his car at the track edge, had monitored progress throughout the test, armed with a timing chart and stop watches.

so far had impressed the press representative, so much so that he suggested the test be extended one more day just to see what speed the Excelsior would achieve over the measured quarter mile. He was not disappointed either when a mean speed of 85.75mph was recorded under very adverse weather conditions. Admittedly, the machine carried no lighting equipment and was fitted with a straight through exhaust pipe throughout the entire test, but even when a silencer was fitted and no adjustment made to the carburation, the speed fell only to 76.2mph.

When the machine was taken back to the works for the final bench test, the resultant power curve was an improvement on the original recorded after the first bench test. So, what were the conclusions?

Ironically, they were not as clear cut as may first have been imagined. Whilst on the one hand Acheson's running-in compound had shown how effective it had been in ensuring high speed reliability, credit was also due to Excelsior themselves for manufacturing a standard over-the-counter motorcycle that had successfully withstood such a gruelling test.

Whatever conclusions were reached by the average motorcyclist, both Achesons and Excelsior had every reason to be pleased with the results of the test. So much so in fact that Excelsior had it presented in the form of a specially printed eight page leaflet so that both parties could benefit from the publicity.