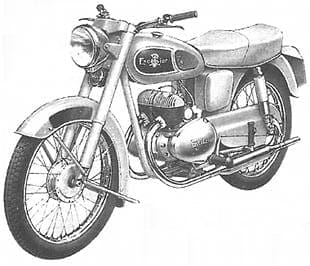 Excelsior had the honour of being Britain's oldest motorcycle manufacturer, having sold their first machine in 1896. The company had been formed in 1874 as Bayliss Thomas & Co, to make bicycles under the Excelsior trade mark, and by fitting a 144hp Minerva engine into one of their bicycles as a tentative venture, they became the first manufacturer to sell a motorcycle in Britain.

The business flourished, thanks largely to the efforts of Harry Martin who was responsible for many of the company's early racing successes at tracks such as that at Canning Town. By 1910 they were strong enough to forsake the Bayliss Thomas name, to become the Excelsior Motor Company Ltd., although the old name was not to fade away completely.

Whenever their machines were sold abroad, they were marketed under the Bayliss Thomas name, to prevent confusion with the American Excelsior; a practice that continued well into the 1930s.

Excelsior made a good many excellent motorcycles in their time, both two-stroke and four-stroke, including the never to be forgotten ohc Manxman. Sadly, their factory in Tyselcy, Birmingham, suffered badly during the 'Blitz' of WWII, with the result that after the war they concentrated on the manufacture of a comprehensive range of two-strokes only. Even so, they remained an innovative force within the industry. Whilst many of their Performance and pulling competitors were building refined versions of what they had offered immediately pre-war, Excelsior drew the crowds in their thousands to their stand at the 1949 Earls Court Motor Cycle Show. The 246cc Talisman Twin had arrived.

180 degree crankshaft
It is common knowledge that a vertical twin two-stroke with a 180 degree crankshaft is smooth running and has an even torque. More to the point, the post-war British motorcycle industry had largely ignored the 250 capacity class, with the exception of BSA's basically pre-war C10 and C11 models. It was a situation that Excelsior exploited to the full, to offer a lively twin cylinder 250cc two-stroke with a maximum speed of 60 mph, at a moderate price; bearing in mind that its specification included rear suspension.

The heart of the new design was the robustly built engine, with its five bearing crankshaft. Two of the main bearings were located at the crankshaft's centre, and of the remaining three, two were on the drive side, the other supporting the magneto generator. The bolted-up crankshaft ran in a crankcase built up from three separate sections, each piston having its own crankcase. The cylinder barrels were separate and generously finned to provide adequate cooling. The pistons had flat tops and the transfer ports were arranged on the right and left-hand side of each cylinder. Mixture was supplied to both cylinders from a single Amal carb. Light alloy cylinder heads were detachable, having a half pear combustion chamber, that tapered at the rear. A 4-speed gearbox bolted direct to the rear of the crankcase assembly. 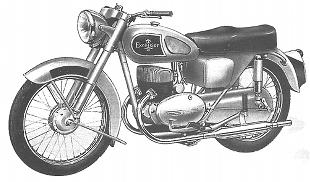 The frame design, shared with the other Excelsior springers at that time, was of the single downtube, full loop type, of unusual construction at the rear end. The three rear suspension springs (two main and one rebound) were contained in circular spring boxes, through which passed a centre rod that linked together the rear ends of the chainstays. Each spring unit slid up and down this central tube, the wheel supports being attached to each of the spring boxes.

The TT1, as it was catalogued, retailed at £113.3s.6d, which rose to £143.14s.8d after Purchase Tax had been added. It weighed 2371bs and at a steady 40mph returned a fuel consumption (petroil) of 99mpg. It would cruise happily at 50mph, but above that speed, high frequency vinration made itself evident if it was sustained for any period of time.

1950 Motor Cycle Show
A sports version, the STT2, became available at the 1950 Motor Cycle Show. It was finished in beige, as distinct from the TT1's maroon and differed in having a dualseat. Both Talisman Twin models now featured a number of improvements, including a wheelbase lengthened by 1½ inch. The most noticeable outward change was a much smoother gearbox end cover and a shorter gear lever.

When hydraulically damped pivoted fork rear suspension began to supersede the undamped plunger type, the TT2 Talisman made its debut at the 1953 Show, with an entirely new frame. It also had a dualseat (of different shape) and a fork top panel that contained the speedo, ammeter and lighting switch. These improvements applied also to the STT2 Sports version. The original TT1 and STT1 plunger models were still available however, probably remaindering old stock.

The oddly designated SE-STT2 (special equipment) model appeared at the 1954 Show, fitted with full-width hub wheels. The standard model had by now become TT3, finished in pearl grey. Just a year later came the STT4 Sports model, fitted with a tuned engine and twin carbs; the usual two-into-one exhaust system gave way to a twin pipe layout each with its own silencer.

Further changes in specification took place during the years that followed, the most significant being the redesigned twin carb Mark 5 engine used first on the Sports model for 1956; which in consequence became the STT5. Cylinder heads and barrels were even more generously finned and the exhaust ports widely splayed. The standard TT3 continued more or less unchanged, although both now had full width hubs and mudguards of a deeply valanced style. Pale cactus green became the standardised colour, with fuel tank panelled in dark green.

It wasn't until the 1959 season that the TT3 acquired the TT5 engine, thus becoming model TT4. These model designations continued up to TT7 and, STT6 – the former then becoming ETT8 and subsequently ETT9.

A new model, S8 Super Talisman made its debut in November 1957, with an enlarged 328cc engine, but to more or less the same specification as the twin carb model. Production of both the 246cc and 328cc models ran on until 1963 with only relatively minor changes, by which time Excelsior were finding themselves in a difficult trading situation. Then, after struggling to market just two basic single-cylinder machines, in either complete or DIY Kit form, the old company was acquired by Britax Ltd, the accessory makers.