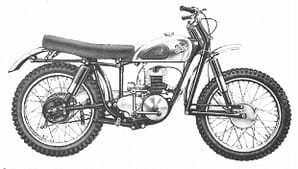 Although DOT was only a relatively small company, based in Hulme, Manchester, it ranked as one of Britain's motorcycle pioneers. Formed in 1903 by Harry Reed, it is alleged the name was coined from the slogan later used in advertisements by the company in the Twenties – 'Devoid Of-Trouble'. However, this is open to question. Earlier models had used the words 'The Dot' written in script on their petrol tank transfers, which gives rise to doubt. Probably no one will ever know for sure, as Harry Reed never disclosed why he had decided to use DOT in the first instance.

DOT produced some remarkably good machines in its time, Harry Reed himself winning the twin cylinder class of the 1908 TT, on a DOT fitted with a Peugeot engine. Later, the company used mainly JAP engines, although alternatives such as Blackburnes and oil-cooled Bradshaws were also fitted. Although the valiant efforts of the Twemlow brothers in the Lightweight TTs of 1927 and '28 had helped keep the DOT name to the fore, they succumbed to the trade slump of the early Thirties. It was not until World War II that a contract from the Ministry of Food for a three-wheel delivery truck enabled them to get back on their feet.

Their re-entry into the motorcycle world was emphasised at the 1949 Motor Cycle Show where they had four Villiers-powered models on display. Two years later (there was no show in 1950) they showed their intention to again compete in competition events. They had already entered that yea 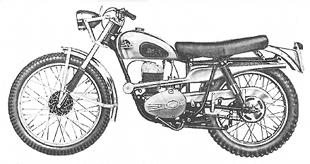 r's newly-introduced125cc Lightweight TT, to come away with the Manufacturers' Team Prize, and now they had 197cc Scrambles and Trials models as well, with prices ranging from £121.7s 9d, to £131. 12s 3d. Even a factory engine tuning service was available, for £5 in the case of the Scrambler. To many, it seemed little short of cheeky, that such a small capacity machine, powered by a Villiers engine, was regarded as suitable for Scrambles events, even if organisers had begun to cater for an up-to 200cc class. It barely looked the part either, with a simple loop type frame, a rigid rear end, a rather frail-looking telescopic front fork and an exhaust system that comprised an expansion box close to the cylinder, then a short tail pipe. But looks can prove deceptive, as the results subsequently showed.

Competition world
When the factory fielded riders of the calibre of Bill Barugh, Brian Sharp, Terry Cheshire and Arthur Vincent, the competition world began to sit up and take notice. These four, and other riders such as E. Webster and W.H. Wood, dominated both the 125cc and 200cc classes in most of the major scrambles of 1952. Furthermore, it was not unknown for them to venture with further success into the 201cc-350cc class, much to the chagrin of the four-stroke riders who had come to regard this class as exclusively their own! They were definitely not amused when Bill Barugh won the 350cc class of the Dartmoor Scramble on a 201cc DOT, Terry Cheshire backing him up with a third place. Indeed, DOT were making such an impact in competition events that they decided to cease manufacture of their road-going models at the end of the 1953 season, so that they could concentrate solely on off-road sport. They had again dominated the lower capacity classes of scrambles throughout the 1953 season, with a particularly stouthearted effort at Shrubland Park: There they took not only the first four places in the ultra-Lightweight race, but also the Manufacturers' Team Prize. Then, they successfully contested the Lightweight race, taking the first two places thanks to the combined efforts of Messrs Barugh, Cheshire, Vincent and Howlett. By the end of the season, DOT had won 10 out of 11 National trade-supported Scrambles, in classes up to 250cc.

Lessons learnt in competition were put to good effect. For 1954 the scramblers became available with the option of an Earles-type front fork, which added a further £5 to the purchase price.

The frame had already been strengthened and was supplied with pivoted fork rear suspension, which had been introduced a year earlier. Also new in 1953, had been a system of mountings for the 8E Villiers engine utilising Silentbloc bushes at all three engine attachment points, claimed to isolate the rider from the effects of engine vibration. A big step forward for 1954 was the availability of yet another option – a 4 speed gearbox at an extra cost of only £6, plus a further £1.4s.Od for the iniquitous Purchase Tax, that was inescapable; it applied to all 'extras' and options.

If any competition did come at all for the Manchester bikes, it was usually from Francis-Barnett, and particularly Arthur Shutt, who managed to keep this Coventry based manufacturer in the hunt. 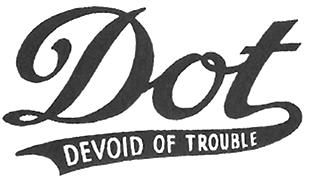 But DOT always gained the upper hand and it wasn't until Greeves began to make their presence felt towards the end of the Fifties, that DOT started to lose their grip. By then, they had been using their own design of leading link front fork, which was introduced during 1956 and continued for something like ten years. There was a new generation of riders too – Frank Yarwood, John Griffiths and Pat Lamper – who had been achieving an equally high level of success.

Like many other two-stroke manufacturers, DOT found themselves with a problem when Villiers ceased proprietory engine manufacture during 1965. The Villiers company had become part of Norton Villiers Ltd as the result of a take-over by Manganese Bronze, at the time of AMC's collapse.

As a result, DOT had little option other than to make their own engine, although in reality all they made was the cylinder barrel and head, the remainder originating from Alpha Bearings. Sadly, the company was now on the downhill run and by the early Seventies, motorcycle production drew to a close, although the company remains within the industry to this day.

Harry Reed had not lived to see the later fortunes of his company. He had relinquished his interest in it during the mid-Twenties, after which it was reconstituted as DOT Motors (1926) Ltd and, later again, as the DOT Cycle & Motor Manufacturing Co. Ltd. He died in 1950 at the age of 75.

Perhaps some day an enterprising publisher will publish the history of this small but old-established manufacturer, that made such an impact over its long lifespan.