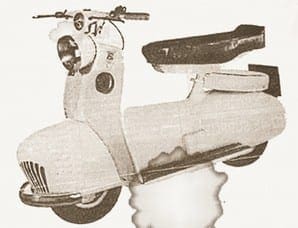 The austerity years in Britain, following World War II, were times when personal trans­port was out of the financial reach of a large part of the population. A car was a dreamed of luxury and, a full size motorcycle hardly more attainable; a pedal cycle might be a possibility though and, if only an engine could be added?

It surely could, thanks to the ingenuity of several makers who were soon supplying the 'clip on' engine boom of the early 1950s. Many and varied were the designs on offer, but perhaps best remembered of all, was the Cyclemaster engine-in-wheel; self contained and easily fitted in place of the rear wheel, it was moreover on the market at the right time to crest the wave of demand. So much so, that the makers, Cyclemaster Ltd, of Byfleet in Surrey, were claiming over 100,000 owners in Great Britain, by late 1954. 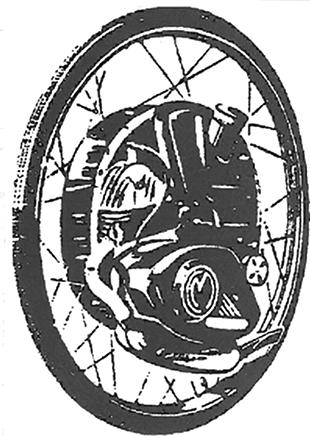 It couldn't last of course, as the economy picked up so did expectations of more comfort, the ability to travel further, faster with, naturally, better protection from the elements. Cyclemaster made several attempts to uprate their image, firstly with the 32cc engine-in-wheel unit moved to the bottom bracket position of a purpose made motorised cycle (the Cyclemate) and then by importing the 49cc Berini Autocycle from Holland; today we would call the Berini a moped, but 'moped' was then a word recently coined by the German industry and still to be adopted in Britain at the time.

Finally, and with sales still flagging, they decided to go the whole hog and market a scooter; one that would be British made. With no time to lose on design and development how­ever, they looked around for something that was already on the stocks and where better to look than Italy, from where the most successful scooters already came. Cyclemaster chose the Piatti, a novel if somewhat unusual scooter, powered by a horizon­tal single cylinder 125cc 2 stroke engine and fully enclosed chain transmission, via a 3 speed gear.

The design had first been touted at the 1952 Brussels Show, but it was June 1956 before Cyclemaster launched the Piatti on the British market,  laying heavy emphasis on its all British manufacture, in a trade then overwhelmed by superior imported products.

Adams Bros & Burnley
Its single main body pressing/frame assembly was made by Adams Bros & Burnley of Harrow and, with the aid of internal stiffeners, provided locations for all the components nec­essary to build up the complete design. The complete engine/transmission/rear wheel assem­bly was pivoted from the body sides, thus the whole assembly moved as one with the rear sus­pension. A tension coil spring picked up on the transmission housing and also, at the rear of the stressed body pressing, where a three-positioned mounting gave adjustment for road and load conditions.

Slotted grilles at front and back of the body permitted a through flow of cool­ing air, dispensing with the need for power-sapping fan cooling of the engine; a traditional and very necessary feature of other enclosed scooter designs. 1.65 gallons of petroil were held in a tank hidden inside the body pressing, its cap poking through, just behind the weathershield. 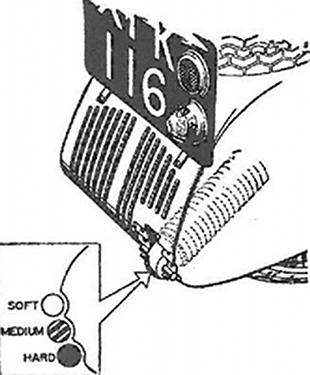 The weathershield itself and long footboards were added for rider comfort, while a protruding stem in the top face of the body was surmounted by a dualseat, under which was the tool tray. This stem mounted seat gave 3i4" of height adjustment, claimed to be another unique Piatti feature.

The streamlined handlebar and con­trol assembly was supplied as a unit by Doherty's of Birmingham and with Wipac flywheel magneto, Hepolite pis­ton, Amal Monobloc carb, Dunlop 3.50×7 tyres, Smiths speedo, Ewarts taps and caps and Torrington needle bearings everywhere, Cyclemaster could justify their British made tag with ease.

'Beautifully styled' and 'finished in glistening cream paintwork, polished chromium and red waterproof PVC upholstery', went the sales patter; economical too, with 140mpg available ­safe to ride, the low centre of gravity and symmetrical weight distribution, was inherent to the design.

What's more, it was cheap to buy at £129.11.7 (£129.58) inclusive of Purchase Tax and, Cyclemaster avoided that usual British disease of stripping away every desirable fitting and listing it as an 'extra', yes this scooter was 'all-on', including spare wheel and luggage carrier.

Buying public
As if to demonstrate the cussedness of the buying public however, a little over a year later at the 1957 Earls Court Show, a standard Piatti was shown, with single Autocycle style saddle and toolbag, shorn of its carrier and spare wheel and finished in Brooklands Grey enamel, it was to cater for those whose 'wallets are shallow'.

Initially the public took to the Piatti and it was a quite familiar sight in towns throughout the country. Not for long though and that standar 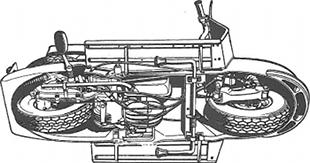 d model offering at the '57 Show perhaps indicated the way things were heading.

Reliability wasn't to be a by-word with this particu­lar product and, as word travelled around so sales quickly dried up. It failed to make it through to 1959 and the best ever year for two wheeler sales in the UK, the year when imported scooters mopped up in a big way.

Another lost cause, but was it 'beautifully styled', or just plain ugly? you can decide for yourselves in the 1990s.