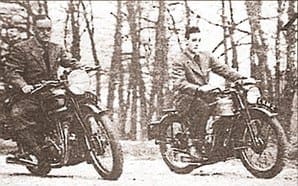 It was in 1938 that Sir Malcolm Campbell, racing motorist and three times World's Land Speed Record holder on four wheels, rediscovered the joys of motorcycling. In a letter to the Coventry-Eagle Cycle & Motor Company, Sir Malcolm wrote "All my old zest has now come back and I realise what fun I have lost in the years that have gone by" (he was a regular motorcyclist from 1908 up the First World War). Going on to say "My boy is equally enthusiastic…and although he drives a car excellently, he likes motorcycling much better". Praise indeed, so just what was the model that had been supplied to Sir Malcolm?

As old as the industry, the Coventry-Eagle company had survived the lean years of the 30s by concentrating on a ride-to-work range of lightweights propelled by mostly Villiers engines, mounted in their own design of pressed-steel frame. Tagged with model names like 'Wonder', 'Silent Superb' and Pullman', the little bikes had done their job well, so much so that, by 1937, the company decided to move back upmarket, with a new range of 4 strokes.

During the roaring 20s, their 4 stroke sportsters, headed by the 'Flying 8' vee twins, had been the ideal of many a young blood; could they create the right image once again? The 'Flying' namestyle was resurrected and now graced 250, 350 and 500 OHV singles, in con­ventional tubular cradle frames, steered by a pair of Webb girders.

The engines were bought in from Associated Motor Cycles (AJS/Matchless and Sunbeam) and closely resembled the AJS and Matchless power units of the time; the magneto drivecase was redesigned to suit the Coventry-Eagle layout and carried the C-E crest, as did the inspec­tion cover at the top of the pushrod tubes, so giving some degree of company identity.

Transmission
Transmission was handled by a 4 speed Albion foot change gearbox and clutch; with igni­tion and lighting courtesy of H. Miller & Co. Ltd. A handsome 3 gallon fuel tank, chromium plated and panelled in green, carried an instrument panel in its top face.

All three capacity models shared common fixtures and fittings, including the impressive mega­phone style silencer; an upswept exhaust system, with tubular silencer being available as an alternative. With the exception of the tank, the cycle parts were finished in black enamel, gen­erously lined in gold. For 1937, Coventry-Eagle adopted the letter prefix 'N' to denote the manufacturing year and the Flying 250 was listed as the N25/1, the Flying 350 as N35/1 and the Flying 500 as N50/1 (/2 in each case, was used to identify the upswept exhaust alternatives).

The Flying models all continued for 1938 and 1939, with but a change in the prefix letters, to `P' and 'Q' respectively. Whether they did sell in any quantity is doubtful; certainly, they are a very rare sight today.

The makers though made good use of Sir Malcolm's testimony in their 1939 catalogue and pictured him on his bike, registered EXN 3 (a London CC issue dating from March 1938) together with his 'boy', the young Donald Campbell, later to become World's Speed Record Holder in his own right. Donald has EXN 2, a tubular framed lightweight the 'Cadet', offered with 98cc or 125cc Villiers engine. Whilst the engine size of Sir Malcolm's bike isn't divulged, a close look at the photos suggests, perhaps surprisingly, that it was in fact a Flying 250.

Why not a bigger bus! Perhaps he did want something bigger, for by the end of 1939 he was extolling the virtues of Triumph's Speed Twin and Tiger 100; saying that he owned one of each and that he would be riding Triumph, for as long as he indulged in the pastime!

Poor old Coventry-Eagle, they obvi­ously never recovered from this body blow as, post war, they stuck to pedal power and left motorbikes to others. But, does anyone own EXN 3, or even Donald's tiddler today; both are bikes with famous first owners.