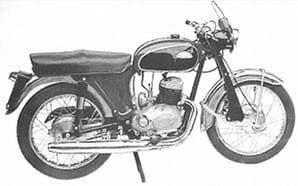 It would seem that Frank Willoughby Cotton, the founder of the Cotton Motor Company, shared similar ideas to Alfred Scott when it came to motorcycle frame design. Impressed by his triangulated layout, which avoided the use of anything other than straight tubes, Cotton devised his own design. It differed from the Scott frame in having four straight tubes that ran from the steering head, two on each side, to terminate at the rear fork ends, which gave a high degree of rigidity. The tubes used for the chainstays were well spaced out and supported by lower torque tubes. These and a pair of splayed twin downtubes supported the engine and gearbox. This arrangement virtually eliminated any tendency to flex, so that the Cotton became another machine with legendary roadholding.

Making motorcycles
Cotton started making motorcycles with this type of frame immediately after the 1914-18 war, working from premises in Bristol Road, Gloucester. From there he produced a number of very memorable models, using proprietary engines, both for racing and for use on the road. His machines showed such promise that he decided to enter a team of three in the 1922 Junior TT, which is when fate took a hand.

A letter from a bogus Harley-Davidson agent in Dublin (a friend of the person he was writing about!) recommended an 18 year old Irishman as a likely candidate for the Cotton team, which as luck would have it, was accepted at face value. As a result, the young Irishman (by the name of Stanley Woods) got his first works ride.

After suffering all manner of problems in the race, which even included his leathers catching fire, Stanley finished 5th, to the amazement of everyone and to the delight of Cotton himself. It started Stanley racing on a long and highly successful racing career that has no parallel, and helped to put Cotton on the map too. 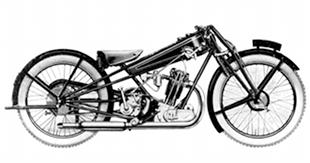 Business boomed, and in the mid-Twenties Cotton Motors needed to move to much larger premises, which were found in Quay Street, close to the city's cathedral. To list Cotton's competition successes would take far too much space. Suffice it to say they continued almost to the end of the Vintage era, whilst even in the thirties they successfully broke some world records.

When their racing successes began to tail off in the face of challenge from the larger manufacturers, they continued to make some really first-class road going models. They ranged from a 148cc Villiers engined two-stroke made during the depression, to super sports five hundreds with JAP or Blackburne engines, in the mid to late thirties. All used the well-proven straight tube frame, which gave them a characteristic rakish appearance that was readily identified with the marque and its familiar triangular trademark.

Ministry of Supply
During the war, the factory was engaged mainly on work for the Ministry of Supply, although it is alleged a small number of 600cc sidecar outfits were made for use in the Middle East. It had been anticipated that the manufacture of motorcycles would recommence soon after the war was over, as tentative arrangements had been made to start with a vertical twin powered by a JAP side-valve engine. The engine never went into full scale production and the venture foundered.

Nothing much seemed to have happened until 1953, when Monty Denley and Pat Onions reconstituted the firm in the name of Mrs. E. Cotton, to start up again at the Vulcan Works in Quay Street, under the name of E. Cotton (Motor Cycles) Ltd. There was no question of carrying on as before in view of the amount of time lost, so an entirely new range of motorcycles was devised, all of them Villiers engined roadsters. Although the famous triangular trademark was resurrected too, it was no longer practicable to use the the well-known frame it had represented. 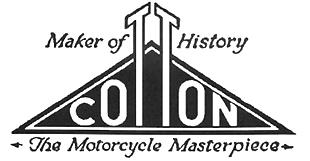 Some of Cotton's roadsters were very eye-catching, especially the 249cc Continental Sports model introduced in 1962. It had a particularly cobbish look, with its Armstrong leading link front fork, full width alloy hubs and a stylish centre section that neatly filled the gap between the underside of the dualseat and the rear mudguard. The engine was the high compression version of Villiers' 2T Sports Twin, built in-unit with a four-speed gearbox.

Made from 'A' quality cold drawn tubing, the jig-built frame was of the cradle type, having a pivoted rear fork, mounted on widely spaced Silentbloc bushes, its movement controlled by two Armstrong hydraulically damped suspension units. Finishing touches were provided by an air scoop on the front brake, semi- dropped handlebars, a small screen and fairing around the headlamp, and chromium plated mudguards. It was priced at £211.14s.4d (£211.7 2) , finished in red, with a black panelled tank.

Like most of the other lightweight manufacturers, Cotton found themselves in dire straights when Villiers were no longer able to supply engines.

As a result, they resorted to the 170cc Italian Minarelli engine to power their Cavalier trials model. Redevelopment of Gloucester city centre brought about another move of premises, this time to Stratton Road. It heralded the end of the road as soon Cotton, like so many of its contemporaries, ceased business altogether.

The 'Maker of TT History – The Motorcycle Masterpiece' as its trademark had once so proudly proclaimed, was destined to become no more than just a memory.