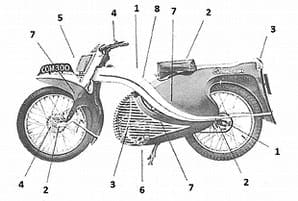 They served admirably to provide a low-powered entry level for newcomers to motorcycling, or as a cheap, reliable and convenient means of commuting to and from work. In consequence, they had of necessity to be built down to a price that would compare favourably with that of their contemporaries.

By the fifties, however, the scene was beginning to change. Some of the newer manufacturers who had entered this market after the war had begun to experiment with brighter colour schemes and had added some stylish fairings to enclose at least part of the machine. Ambassador and DMW are two good examples and such was the impact they made that even the usually very staid Francis-Barnett had begun to follow suit with a fully-enclosed rear before the end of the decade. The two-stroke was beginning to come into its own and shake off its somewhat mundane image of the past, a fact which was emphasised when they began winning competition events which previously had been the domain of their four-stroke counterparts.

Lightweight two-stroke
One company, a complete newcomer to the lightweight two-stroke market, had strongly held ideas of its own and had sufficient, courage to scorn convention when it introduced three startlingly new models at the 1952 Earls Court Show. They differed in almost every respect from what had been seen in the past, and as a result became the sensation of the Show. The Commander had arrived.

Made by the General Steel Group of Hayes, Middlesex, all three models used a Villiers engine, their design being based on a beam-type frame from which the engine/gear unit was suspended. 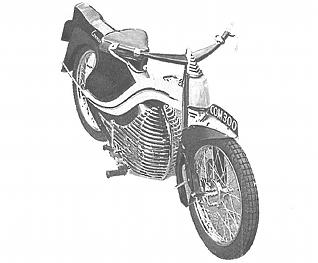 Made of all welded square section tubing, the beam had softly flowing lines, like an elongated 'S' that tapered almost to a point at its rear end. The engine/gear unit was carried in a loop that extended below the beam, and was enclosed within a quickly- detachable chrome plated grille, referred to as the "bonnet".

The front fork was one of the leading link type and was partially enclosed within an extensively valanced mudguard and also by a fairing around the headstock that partially enclosed the handlebars. The swinging arm of the pivoted fork rear suspension was also of square section tubing, and was totally enclosed within a much larger fairing attached to the sub-frame. The fairing acted also as the rear mudguard, with provision for mounting the single, foam rubber saddle, and the rear number plate and tail lamp. The front suspension relied on a stout rubber band on each side of the fork to control its undamped movement, the rear suspension also being undamped but controlled by a single compression spring.

Most unusual
The arrangement of the headlamp was most unusual. It was built into the fairing that surrounded the headstock and enclosed within a glass prism, which was surmounted by a slotted grille that also tapered to a point. The handlebars where enclosed within a stylish fairing to give them a "clean" look, all cables being carried internally. The control levers at each end were of the inverted type.

Three models were available. The Commander 100 was basically a single gear autocycle, which had a 98cc Villiers 2F engine unit and required a pedal-assisted start. Next came the Commander 200 Ultra-Lightweight model, which was fitted with a 98cc Villiers 1F engine and integral two-speed gear.

Highly unconventional
It was inevitable that such a highly unconventional design would attract much comment, and not without a touch of humour too. Most comment centred around the grille that enclosed the engine and one topical cartoon showed a small boy pointing to it and asking the stand attendant "does your parrot bite?". In no time at all motorcyclists had dubbed the Commander as either the 'flying toast rack' or the 'flying birdcage'!

Was the Commander a success? No one will ever know, as it vanished as quickly as it had appeared, although it is believed the prototypes were seen languishing at the Cotton works in Gloucester many years later. As has been said on so many occasions, motorcyclists were very conservative in their outlook at that time and to them such a design must have seemed way out when compared with what else was then available.

There is also the thought that revolutionary though the design was, all three models represented little more than a sheep in a wolf's clothing. All the company really had to offer was three low-powered lightweights, which hardly did justice to the time and effort that had been put into their cosmetic appearance. Whatever the reason, yet another attempt to lure the 'non-motorcyclist' on to two wheels had failed. Even so, many considered the Commander deserved a better fate.