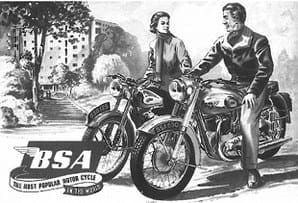 As soon as World War 2 had ended, motorcycle manufacturers were anxious to get back into the production of machines for the civilian market as soon as possible. For many of them it was not just a case of restarting where they had left off, as there was now a need to introduce a vertical twin to their range to regain some of the market they had lost to Triumph when this latter company had introduced their revolutionary Speed Twin in 1937. The war effort had prohibited development work on new designs, so those who already had a vertical twin prototype before the war were a jumpahead of the rest. BSA were particularly fortunate in this respect as they had what in effect as a prototype 495cc A7 model.

It had been derived from a combination of ideas contributed by several well known designers who had worked for BSA at different times. A vertical twin built along semi unit construction lines that incorporated a number of novel features, it had been ready to go into BSA's 1940 catalogue as a rival to Edward Turner's Speed Twin Triumph, had it not been for the war. As a result, its release had to be deferred until September 1946, when BSA were at last able to give details to the motorcycling press. 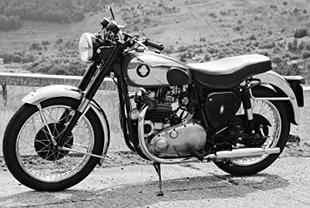 Contrary to popular belief, the final design was attributed to Herbert Perkins, a point made very clear by Bert Hopwood when he was interviewed about it by the motorcycling press at a later date. Bert had not joined BSA until after the new twin was in production and countless numbers had already been sold. It has been claimed the twin owed some allegiance to Val Page's 650cc model 6/1 Triumph twin of 1933, and that even Edward Turner had a hand in its design when he was employed by BSA during the early war be interpreted as the 'signature' of others. Yet the A7 pioneered new ground in many other respects and deserves recognition in its own right.

Unusual construction
Most noticeable was the fact that the engine was of unusual construction, being built along semi unit construction lines. Although the gearbox was a separate unit, it bolted directly to the rear of crankcase assembly, necessitating the use of a chain tensioner to maintain correct primary chain tension. This method of assembly was adopted because it dispensed with the need for rear engine plates and required fewer frame lugs, thereby saving weight. It also meant the final drive chain did not necessarily have to be adjusted at the same time, as would have been required had the gearbox been mounted separately. The gearbox was of the four speed type and not entirely satisfactory at first, having a somewhat slow and notchy change. The six spring clutch was also inclined to give rise to problems if oil got on to its linings and had a rather heavy action. Subsequent modifications helped ease some of these initial shortcomings.

The engine itself used a one piece crankshaft with integral bobweights, to which the central flywheel was bolted. Following current British engineering practice, it was supported by a ball bearing on the drive side and a plain white metal bush on the timing side, which also distributed oil to the big end bearings. The big end bearings were of the split shell type, lined with lead bronze having an indium flash. The indium flash fused with the lead bronze to help overcome sudden overloading problems, which might otherwise occur during running-in. 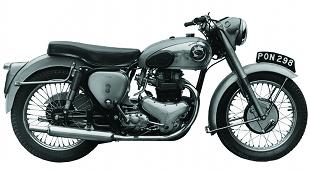 Although the construction of the crankshaft was reminiscent of Triumph design, the arrangement of the single camshaft definitely was not. The A7 carried its single camshaft at the rear of the engine, all four push rods operating through a tunnel cast in the rear of the cylinder block. This layout not only eliminated the possibility of oil leaks from an external push rod tube but also ensured there was no obstruction to the air flow at the front of the block had a forward-mounted push rod tube been used with the more usual fore and aft twin camshaft arrangement. The only snag arose when fitting the cylinder head, as it was difficult to align all four push rods with their respective rocker arms. Carburation was by a single Amal 276 carburettor via a branched alloy inlet manifold.

Extreme right end
The timing gears comprised a series of pinions, the crankshaft having a worm on its extreme right hand end in front of the half-time pinion, to drive the oil pump. The pressure release valve was set to pass oil at 55psi, the pump itself providing a more than adequate flow rate with a bleed off the return pipe to feed the rocker gear. An inner timing chest cover provided an outrigger bearing for the otherwise unsupported intermediate camshaft drive pinion and there was a timed breather operating in an inner cover boss, fitted to the camshaft pinion. The drive to the rearward mounted Lucas magneto contained an auto advance unit. The forward mounted dynamo was chain driven, from a separate compartment within the inner cover. The drive pinion contained a spring loaded friction drive to eliminate damage in the event of a dynamo seizure.

Early models had the speedometer mounted in the petrol tank, in common with the other BSA models at that time. The power output was claimed to be in the region of 26bhp at 6,000rpm, which gave the A7 a reasonable turn of performance and some favourable comments in the motorcycling press. Maximum speed was in the region of 80mph and most comments related to the ease of starting, mechanical quietness and a steady, reliable idling speed. Road holding was good too, although in an era of rigid frames and softly sprung telescopic forks there was little to serve as a reliable standard for comparison. The first production models were priced at £177.0s.7d, inclusive of Purchase Tax and the obligatory speedometer, which compared favourably with that of the machine's Triumph counterpart. The A7 weighed just over 360lb in rigid frame form and was finished originally in Devon Red. Later came the option of a black finish, both versions having a gold lining and chromium plating, where appropriate. 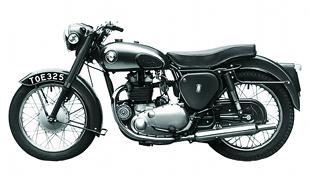 That the overall A7 design was highly successful there can be no doubt, subsequent improvements made in the light of operational requirements making it even better. The first variant to appear was a side valve version made specifically with army use in mind. This machine, of 490cc capacity, was entered by the Ministry of Supply in the 1948 Scottish Six Days Trial, where it successfully completed the course in the hands of TA Tracey, riding for the Aldershot Club. Sadly, it was not taken up by the army, who remained faithful to BSA's M20.

Another variant was a specially built trials model, ridden in a number of trials events by Bill Nicholson, one of the work's star trials riders. Although a very functional looking machine, it failed to justify what was expected of it, even in Bill's capable hands. It was eventually put aside when Bill found he could achieve more consistent results with one of BSA's trials singles.

Soon a sports version of the A7 appeared, with twin carburettors, the Star Twin and it was three of these models that won the coveted Maudes Trophy for BSA when they covered a total of 4,958 miles in an ACU-controlled test during 1952. The three machines had actually taken part in that year's International Six Days Trial, which was included in their ambitious itinerary. They emerged victorious without loss of marks, each rider winning a Gold Medal, a remarkable achievement for what was a basic road going machine, with full road going equipment!

By then the A7 and the Star Twin models had already benefited from a number of modifications made after Bert Hopwood had joined the company. They had been implemented towards the end of 1950, based on the experience he had gained when he originated the A7's bigger brother, the immortal 650cc A10 Golden Flash which the public first saw at the 1949 Motor Cycle Show.

It was not until 1963 that the last of the models fitted with the A7/A10 engine unit were finally phased out of production, succeeded by the unit construction designs that were to take their place. The Super Rocket/Rocket Gold Star models were the last to go, the ultimate in the range's extended high performance models. There were many that mourned the passing of the pre unit 'A' series.